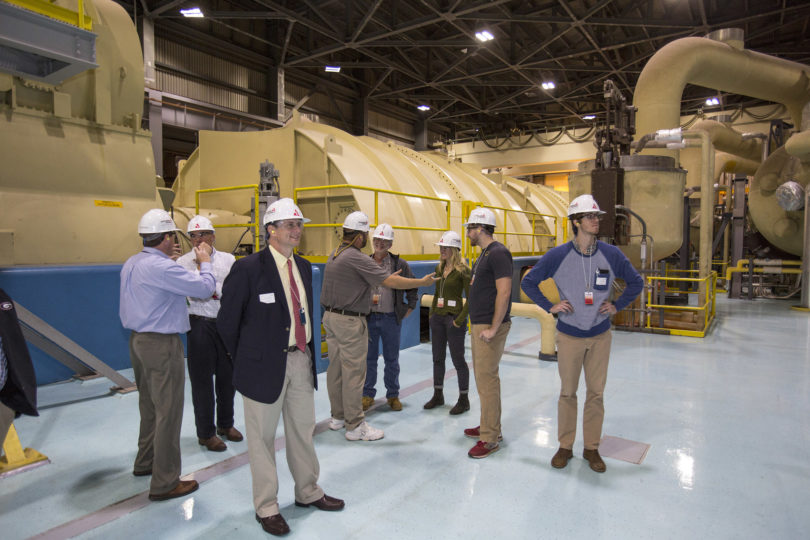 Classroom concepts came to life for a group of College of Engineering faculty and students as they got a behind-the-scenes tour of the Vogtle Electric Generating Plant in Burke County Nov. 3.

Six students as well as several College of Engineering faculty and Dean Donald Leo got an intimate look at the two-unit nuclear plant and got to see the enormous construction operation where two more nuclear units are being built on site.

Considering the layers of security around the plant to protect public safety, the tour was a rare treat. In getting up close to the mammoth 548-foot-tall cooling towers and getting to see inside a nuclear plant control room, the field trip created an opportunity to see in person some of humankind’s highest achievements in engineering and ask questions to some of the people who keep the plant humming.

“You learned about it in class, but it’s different to actually see it in person,” said Greg Mulkey, a fourth-year student from Fairmount who is majoring in agricultural engineering with an emphasis on mechanical systems.

“I’ve seen pictures of a cooling tower (the large concrete structure where steam is released from cooling), but that’s just the surface,” Mulkey said. “We got to go deeper.”

Mulkey said he was especially impressed with getting to see the giant turbine generator in action. In nuclear power facilities, heat generated from nuclear reaction turns water into steam; the steam churns the blades of the turbines, and the spinning creates electricity.

On the tour, Mulkey and his classmates got to touch the warm, vibrating generator as a turbine rapidly spun inside.

The tour had something for everyone.

Stephan Durham, an associate professor of civil engineering, said the electric generating plant-with its emphasis on energy, mechanics and construction-was useful across the spectrum of engineering studies.

“This touches all of our degrees,” he said.

Katie Dean, a fourth-year environmental engineering student from Alpharetta, was fascinate with how the nuclear plant works. Nuclear power produces no greenhouse gases in creating energy.

The College of Engineering group also got to tour the construction site where Vogtle units 3 and 4 are being built, and are expected to be in service in 2017 and 2018. They will be among the first nuclear units built in the U.S. in 30 years. The scale of the multibillion dollar operation is hard to describe.

After visiting the construction site where work is underway to build Vogtle units 3 and 4, Dean said she was impressed with the overall scope involved in creating the new units. Having worked on a construction site before, or as she put it having “been on the roof with a nail gun,” she said it was by far the biggest construction project she had seen.

“It was incredible,” she said.

Leo said, “This is an opportunity for them to see the real-world challenges in operating a facility like this.”

Plant Vogtle is operated by the Southern Company and owned by Georgia Power, Oglethorpe Power, MEAG Power and Dalton Utilities.

The trip was organized for the engineering college by UGA alumnus Craig Barrs, executive vice president of external affairs at Georgia Power, and Ronny Just, an environmental issues manager at Georgia Power.