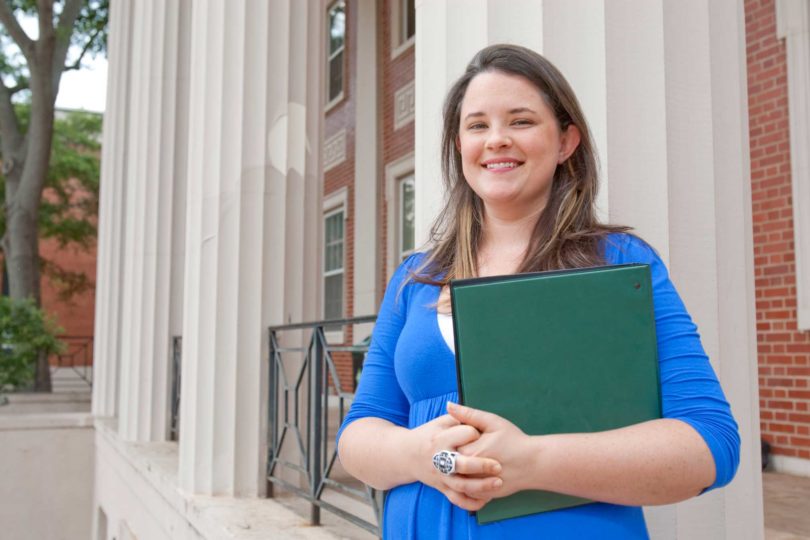 Laurie Norris describes herself as a professional student; and given her job that may be an asset.

As the English department’s administrative coordinator for the undergraduate office, Norris steers students toward taking classes that will help them both academically and professionally.

“I was kind of worried about it when I first took the job because, even though I am a solid 10 years older than my oldest traditional student, I have a baby face, so I kind of look the same as them and I essentially act the same as them. So I was worried about being their authority figure,” she said from her office in Park Hall. “But it is really great seeing students on the other side of the classroom. Being here and having taught here, you get to work with them and help them learn to write and all these really important skills. And that’s fabulous, but you don’t get a sense of who they are as people. And getting to know my students as actual people, finding out that this is how I can help them, is just great.”

With four degrees under her belt—a master’s in English from UGA, two bachelor’s in English and film from Georgia State and an associate’s in chemistry from Georgia’s Oxford College—Norris understands the hems and haws of the student experience. It helps her, she said, relate to the needs of the nearly 200 students she advises.

“Having been a transfer student, having changed my mind about a million times about what I want to do and what I want to major in,” she said.  “I understand how stressful it is for students—especially in an English department when your parents say, ‘What are you going to do with that degree?’

Her experiences on both sides of the classroom have led her to a holistic approach to advising.

“This is the perfect job for me,” she said. “I like helping the students figure out how their professional goals can start to match up with their personal goals. That way I can save them so many years of having multiple W-2s from all the different jobs they’d be juggling.”

That kind of passion has kept her in UGA classrooms, or as she puts it, “taking great advantage” of the Tuition Assistance Program. She usually takes one graduate-level class per semester and is mulling over the prospect of pursuing a Ph.D. in English.

Outside the university environment, Norris is no less dedicated. A constant knitter, she sells her wares on the handmade art website Etsy (www.etsy.com/shop/knitfreeordie), under the moniker “knitfreeordie” to finance mission trips to Liberia, where she works to help end child prostitution and provide support for victims of sexual violence.

“I’m trying to raise money to pay for my ticket to go again,” she said. “The experience over there is so often overlooked in this country and so I try to help let people know about it. When my dad goes there in November, he is taking bicycles, clothes and basic supplies to help the country as it’s getting back on its feet.”

On Etsy, she mostly sells knit hats and gloves but hinted that there may be a wider selection of merchandise coming soon.

“I am a giant nerd. I’m knitting an army of Daleks, little Dr. Who monsters right now,” she said.

As a native of Atlanta and longtime resident of its metro area, Norris said she heard about UGA her entire life—and misperceived Athens as being just a football town.

Now that she’s lived in Athens, things are different, she said.

“When I’m not in class or helping students I mostly just hang out,” she said. “Now that I’ve been here in Athens for five years, I’ve become a bit of a townie and see how much more there is to offer beyond just one sport.”