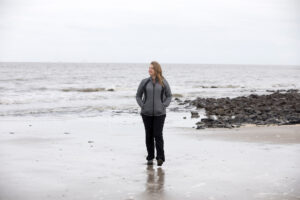 Jenna Jambeck, an environmental engineering professor in the College of Engineering, was recently quoted in a Popular Science article about a company that pairs commercial waste with companies that can reuse it.

For almost a decade, Damon Carson’s company has been finding new homes for commercial waste. The waste items are paired with companies who will recycle the waste to use in other products.

Jambeck said this concept is particularly fertile territory in the U.S.

“We produce the most waste per person of any country in the world,” she said.

In 2018, the most recent year for which figures are available, the U.S. Environmental Protection Agency estimated the size of the municipal solid waste stream of the U.S. at 292.4 million tons, roughly 4.9 pounds per person per day. The total is more than twice what it was in 1960. But Jambeck said that is far exceeded by industrial waste, castoffs from everything from manufacturing to agriculture.

But how does Carson choose what to buy, and how much to pay, for goods that may have no obvious use or established second-hand market? Jambeck, who’s currently conducting a significant study of plastic pollution in the Mississippi River, said she was drawn to the field of municipal solid waste for just this reason. As an environmental engineer, she was captivated by the metaphysical slipperiness of garbage.

“I was just fascinated because we all don’t define waste the same,” Jambeck said. “We know what water is (water’s water). But waste, it’s like the adage, ‘one person’s trash is another’s treasure.’”