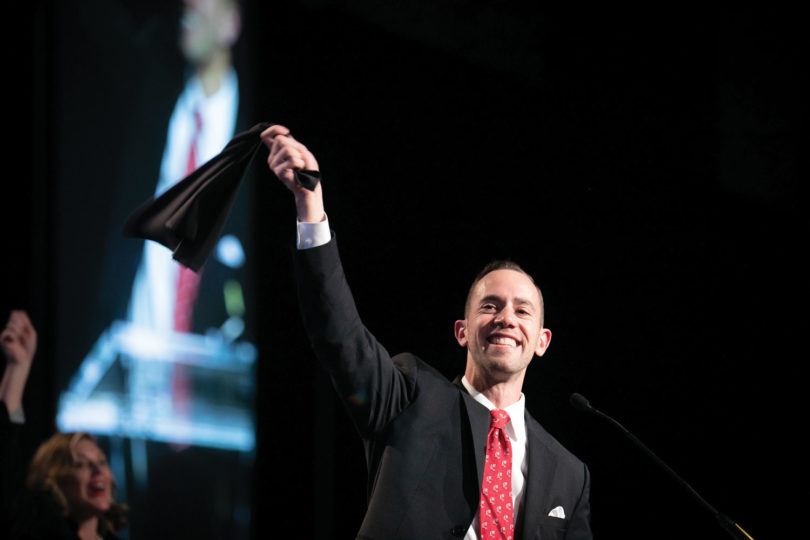 Tech entrepreneur Eric Spett BBA '10 and his B-to-B marketing platform, Terminus, earned the No. 1 spot on the Bulldog 100 for 2019.

Like a true bulldog, Eric Spett couldn’t let his moment standing in front of a room full of hundreds of University of Georgia grads pass without Calling the Dawgs.

Spett and his business-to-business marketing platform, Terminus, had just been named No. 1 on the Bulldog 100 for 2019, the fastest-growing businesses owned and operated by UGA alumni.

When his name was called, Spett BBA ’10 brought a black napkin from the table to spin over his head like any good UGA fan would.

“This is my one opportunity to do this,” he said. The room joined in.

For Spett, the award had special meaning because UGA is where his entrepreneurial dream began. As students, Spett and classmate Dave Goldstein BBA ’10 began working on their first startup during their senior year. They spent hours in the study rooms at what was then called the Student Learning Center (now the Miller Learning Center), coming up with FishList, a digital platform for the seafood industry, and bringing it to life. Spett says he received some invaluable guidance from Terry College faculty Mark Huber PhD ’98 and Craig Piercy MBA ’92, PhD ’01. Designing a sophisticated business plan, Spett and Goldstein won top honors at UGA’s Next Top Entrepreneur contest.

But after pouring four years, their life savings, and everything they had into their company, FishList failed. Spett was devastated. “I was mentally, physically, emotionally, and financially wrecked,” he recalls.

Looking to pick himself back up, Spett reached out to Atlanta tech-entrepreneur David Cummings, the founder of Atlanta Tech Village. Cummings gave the humbled Spett a position at his latest startup, the ecommerce marketing firm Kevy, and predicted that he would be starting a new company within two years.

At the time, Spett was still scarred over the demise of FishList. “But he put the bug in my ear,” Spett says. Sure enough, within a matter of months, Spett felt inspired to give it another try.

Cummings invested the seed money to start what would become Terminus. The firm hosts a platform that promises to help B2B companies efficiently target and sell to the right sales accounts. Five years in, the company has taken off. Terminus was named one of Atlanta’s fastest-growing businesses and one of the best places to work by Atlanta Business Chronicle. The company already has over 200 employees and has raised roughly $30 million in venture capital.

Even with all those honors, Spett says the Bulldog 100 recognition was “one of the most meaningful.” His Terry College faculty mentors, Piercy and Huber, were at the ceremony, and it was an opportunity to reflect on how far he’s come.

“Being honored nine years later as the fastest-growing Bulldog business is a huge honor.”