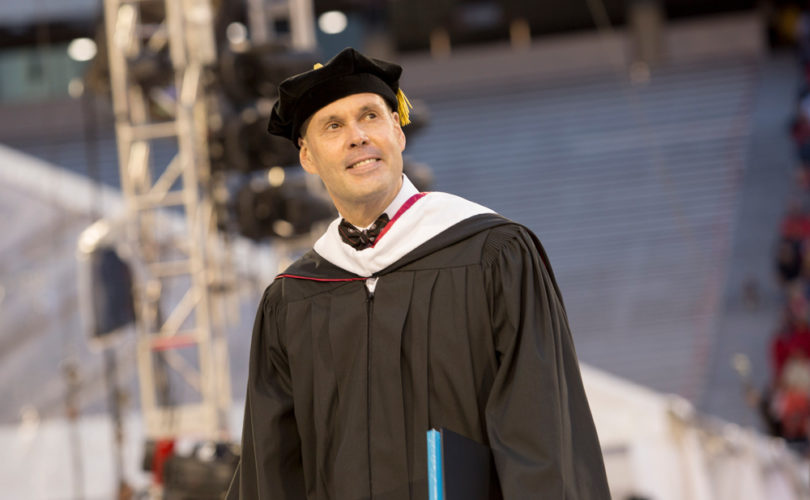 With three Sports Emmys and a seat in the anchor chair of the NBA's definitive studio show, Ernie Johnson Jr. ABJ '78, is one of the most popular and respected figures in sports broadcasting. In 2017, he delivered UGA's Commencement address. (Photo by Dorothy Kozlowski.)

About three hours after he delivered UGA’s 2017 Commencement address, Ernie Johnson Jr. ABJ ’78 was enjoying dinner with his wife at their favorite Athens restaurant, Five & Ten, in Five Points. Some of the graduates Johnson had spoken to earlier in the evening were celebrating with their families, and the atmosphere was electric.

On a high from the evening’s excitement, Johnson stole a quick glance at his phone and saw an email from his publisher. It said that Johnson’s autobiography, Unscripted: The Unpredictable Moments That Make Life Extraordinary, had hit The New York Times bestseller list.

“How did all of this happen? It was just one of those pinch yourself moments,” Johnson says. “From a commencement address between the hedges to the book in one night. That whole experience—I don’t think anything will be able to top it.”

At 214 fast-paced pages, Unscripted is a quick, engaging read. Johnson discusses his experiences over nearly two decades as the face of Turner Sports, but the most affecting parts of the book are about his family. He dives deeply and lovingly into his relationship with Cheryl, his wife of more than 35 years; the growth of his family, which includes four adopted children; and his successful battle with non-Hodgkin’s lymphoma.

“There were a lot of nights where I would struggle because you are going to places where you haven’t been in a while,” Johnson says. “Whenever there was a chapter that was difficult, I’d run it by Cheryl. Sometimes she’d say I wimped out and should’ve gone deeper. So, I’d go back and redo it. She was a wonderful sounding board.”

“I think you have a responsibility to be prepared. Watching sports is the hobby of millions of people. For the athletes, this is their livelihood. You can’t just try to bluff your way through. You’ve got to be fully immersed in all these sports to deliver the product the viewers deserve to see.”

Johnson started his broadcasting career in news; he didn’t move to sports until 1983. In 1989, he joined Turner Sports, and the following year he helped launch Inside the NBA, which he has anchored ever since.

He’s been called a point guard, a traffic cop, and a ringmaster, but Johnson says the best description of his role on Inside the NBA is that of a dad driving cross-country threatening to turn the car around if the kids keep acting up.

“It’s impossible to predict chemistry,” Johnson says. “Kenny [Smith], Charles [Barkley], and I have been together for 18 years, and you just don’t find that on TV anymore. I’m going to throw some stuff out there and you guys are going to answer it, and we’re not going to rehearse it. We get genuine, gut reactions to things and sometimes we’ll have a free-for-all.  But it’s also a show where at some point you’re going to laugh. It’s good to have a job where you laugh.”

Johnson is perhaps best known for his basketball work, but his first love is baseball. That’s not really a surprise. His father, Ernie Johnson Sr., was a legendary broadcaster for the Milwaukee and Atlanta Braves, as well as a pretty good pitcher for the team in the 1950s. (He compiled a 36-22 record for them over seven seasons including a World Series title.) Ernie Jr. played baseball in high school and walked on as a freshman at UGA. As a sophomore, he jokes that he was “asked to walk off” the squad.

Over the years, he’s covered almost every sport and called some all-time memorable events, ranging from Jack Nicklaus’ final round at the British Open to Dan Jansen’s gold medal-winning speed skating performance at the 1994 Winter Olympics. And he’s won three prestigious Sports Emmy Awards along the way, including one in 2015 that he gave to the daughters of fellow broadcaster Stuart Scott, who died earlier in the year. Through it all, Johnson has never forgotten where he came from.

“The thing that keeps pulling me back to UGA is the Grady College,” Johnson says. “I remember sitting in those desks. I love speaking to the kids, and I think that’s part of the responsibility that goes with having a long career in journalism. You want to share the experience with the next generation of broadcasters and raise up that next wave of journalists, especially at the University of Georgia.”