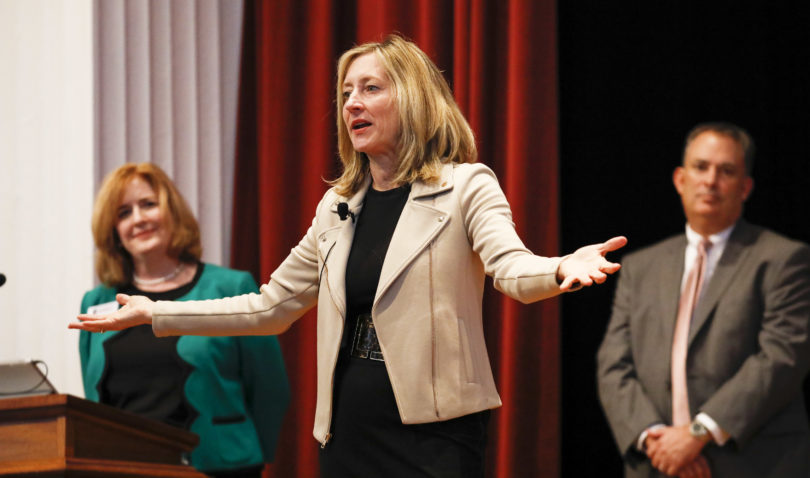 Ann E. Tenbrunsel from the University of Notre Dame delivered the 2018 Ethics Week Lecture Nov. 7 in the Chapel. (Photo by Peter Frey/UGA)

You are not as ethical as you think you are.

That’s the takeaway from the 2018 Ethics Week Lecture by Ann E. Tenbrunsel on Nov. 7. The lecture kicked off the University of Georgia’s observance of the University System of Georgia’s International Fraud Awareness Week and UGA’s Ethics Awareness Week beginning Nov. 11. The lecture, entitled “Blind Spots: Why We Aren’t As Ethical As We Think We Are,” focused on why people overinflate their own honesty or others’ dishonesty depending on the situation.

Tenbrunsel, the David E. Gallo Professor of Business Ethics in the College of Business Administration at the University of Notre Dame and the co-author of “Blind Spots,” discussed the blind nature of ethicality and behavioral ethics.

“It’s a field that really seeks to understand why you and you and I behave unethically, and yet we don’t realize that we’re doing so,” she said.

People want to be ethical

She called ethical illusions “biased perceptions of our own ethicality.” Research has found that typically, people rate their honesty as higher than it should be. The good news, she said, is that this means that people want to be ethical, but the bad news is that people are inaccurate about their own traits.

Tenbrunsel focused on three areas of decision-making: prediction, or how a person thinks he’ll act; action, the making of the decision; and recollection, the person reflecting on the decision he made.

“We predict we’re going to behave one way we often don’t, yet we recollect that behavior as being more in line with our values than it actually is,” she said.

Tenbrunsel attributed this to revisionary ethics, which includes use of language to make the unethical behavior seem better than it was and advantageous comparisons to make a person feel that their ethics are still better than other people’s.

With ethical fading, the brain unconsciously asks what kind of decision and then draws up the criteria for the kind of decision this is. Different decision frames cause the brain to call up different criteria. So, unless the brain determines that the decision is an ethical one, the ethical criteria will not be included. Compartmentalization in businesses also leads to ethical fading, making ethics someone else’s responsibility.

“If we’re looking to change cultures and behavior, you can’t say, ‘I’d like you to think of this as an ethical decision right now,’” she said. “It’s much more difficult than that, because we have to change the way our automatic decision processes frame that decision.”

Be wary of reward systems

While the first three blind spots focus on an individual’s ethicality, the fourth blind spot extends unethical behavior to other people. With motivated blindness, the person refuses to see others’ unethical behaviors if it is not in their best interest.

Tenbrunsel believes there is hope for changing these behaviors, beginning with recognizing your own unethicality.

“The goal of all this was not to make you depressed and say, ‘Gosh, that’s too bad I’m not as ethical as I think that I am,’ but rather to use this information to become the person that we want to be,” she said.

The lecture was sponsored by the UGA Office of the President, the School of Law, the Terry College of Business and the Office of Academic Programs and was designated one of the Fall 2018 Signature Lectures.