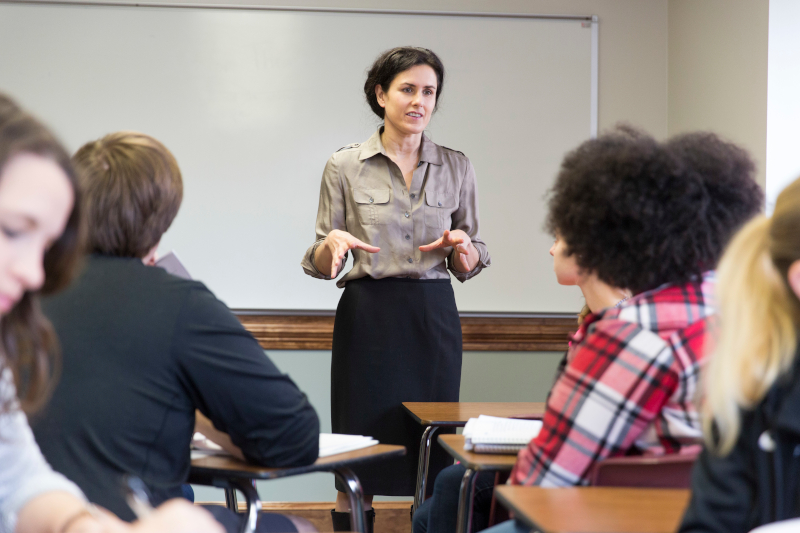 ‘The Slow Moon Climbs’ delves into the science, history and meaning of this life shift

Menopause—that time in every woman’s life when the ovaries no longer release an egg each month and menstruation ceases forever—is a rare thing among Earth’s infinitely varied creatures. Humans and a few species of whales are the only mammals that experience menopause, where females live on for many decades in spite of the inability to reproduce. Scientists, psychologists and doctors have been puzzling over that fact for centuries—what good are older women (or whales) once they lose their fertility? There must be some huge evolutionary benefit that renders women’s lives so valuable post-reproduction that they actually live six to eight years longer than men everywhere around the world.

Indeed, the years after a woman experiences menopause can be incredibly productive and influential, according to Susan Mattern, Distinguished Research Professor of History at the University of Georgia and author of “The Slow Moon Climbs: The Science, History, & Meaning of Menopause.” She opens her book with an extraordinary example: that of Hoelun, the mother of the notorious Genghis Khan. Hoelun accomplished far more than simply giving birth to the notorious emperor of the Mongol Empire. Khan has more than 35 million direct male-line descendants. After Hoelan stopped having children she was critical in keeping her brood safe, leading them in a mission of revenge, and helping to turn the Mongols into a people.

Mattern contends that menopause emerged when we evolved away from chimpanzees millions of years ago. “Longevity is what separates humans from chimpanzees and other apes,” explained the 53-year-old historian. On average, we live twice as long as chimpanzees. After menopause, women could care for their grandchildren, nieces and nephews.  They could forage and grow food, producing more than they consumed.  This idea is often called the Grandmother Hypothesis, a concept that emerged in the 1990s, wherein older women are favored by evolution because they enhance human survival.

Yet today, said Mattern, we don’t look kindly on menopause, seeing it primarily as a medical malady to be either stoically borne or treated with hormones, antidepressants and other medications. “That’s just fundamentally wrong,” she contended. “People see the word menopause in the title of my book and they assume it’s a depressing book when in fact it’s full of good news.”

Mattern reports that menopause wasn’t even a concept in the ancient Mediterranean cultures she has spent her professional life studying: those of Mesopotamia, Egypt, Israel, Greece and Rome. “Ancient physicians and writers didn’t write or talk about menopause,” she explained. “There wasn’t a word for it.”  In fact, one ancient Roman physician, Soranus, thought that menstruation, not menopause, was unhealthy for women and rendered them fragile.

It wasn’t until the 18th century that menopause became a mainstream concept. The term itself was coined by a French physician in 1821. It was also referred to as “women’s hell” and the “death of sex.” Sigmund Freud referred to menopausal women as “quarrelsome, vexatious and overbearing.” A 1966 best seller, “Feminine Forever,” called post-menopausal women “castrates.” By the 1920s the first hormones were synthesized in the laboratory, and by 1938 synthetic estrogen had been developed. Menopause was soon “infused with this idea of a deficit of estrogen,” said Mattern. It is still a medicalized “condition” today, although medical nuance has been added with large studies examining the risks and benefits of estrogen alone, or estrogen with progesterone, and even in some cases adding in a dollop of testosterone, all to “treat” menopause.

Of late, though, attitudes toward menopause have begun to shift. Last year, the popular streaming show “Fleabag” featured a bar-stool soliloquy on the magnificence and freedom of menopause by famed actress Kristin-Scott Thomas. As the Los Angeles Times noted, “It may be the best three minutes of television ever; any woman over 45, or under 45, should have it on a loop.” Salon joined in as well with a piece entitled “TV’s changing view of the change.”

“Menopause is a legitimate phase of life,” said Mattern, “and we wouldn’t be human without it; it’s part of what makes us a super adaptable unique species.” In agrarian societies, she says, midlife was a time when a woman became a mother-in-law and a grandmother and held more status and power in the family. “We’ve lost that, while we’ve gained status in other ways,” she explained, “through business and the workplace. But we’ve lost the idea that there is a midlife stage that is valuable in its own right.”

There’s a casual ageism in our culture that we need to consciously shift, she believes. Mattern dove into this topic in part because of her own personal experience: her second husband is 18 years younger than she. “That made me think about menopause,” she said, “and my supposed expiration date. Our culture has an antipathy to aging and to midlife, and I wondered, ‘Once I transition through menopause, should I still be sexual? Is it OK to have a younger husband? Will I be unworthy somehow?’”

The answer, she found out, is just the opposite. Her marriage has remained good and close through menopause, she is productive, and “I feel liberated.” Post-reproductive life is useful because we transfer resources, knowledge and energy to younger generations. That’s good news for the more than the 100 million Americans over age 50.