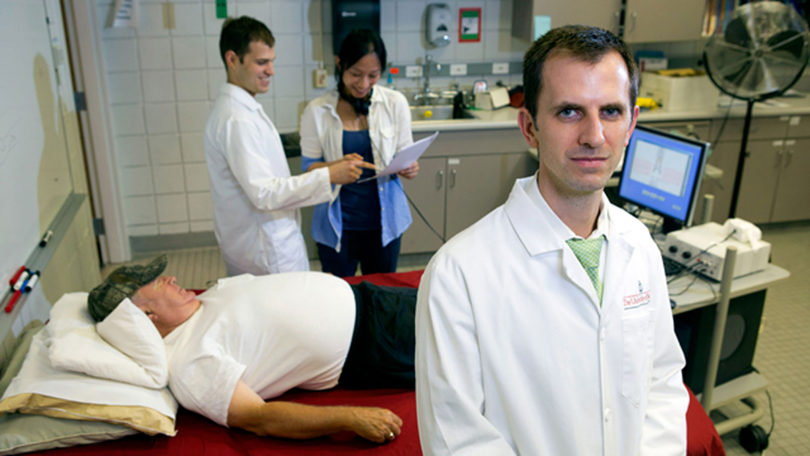 Dr. Jonathan Murrow is a cardiologist and faculty member with the Georgia Regents University/University of Georgia Medical Partnership in Athens

For millions of Americans, simply walking to the mailbox can cause unbearable leg pain as muscles scream for more blood and oxygen.

It’s called peripheral arterial disease and, ironically, one of the best ways to alleviate it is by regularly walking to the point of pain. However, researchers hope a noninvasive measure of oxygen levels in leg muscles will put patients on the road to improvement without the severe discomfort.

About 8 million Americans have peripheral arterial disease, according to the American Heart Association. The disease shares risk factors with other major cardiovascular problems such as heart disease and stroke, including diabetes, smoking, age, inactivity, high blood pressure and high cholesterol.

Treatment now calls for patients to push to the point of often intolerable pain then rest so the blood requirements of the muscles decrease, said Dr. Jonathan Murrow, cardiologist and faculty member with the Georgia Regents University/University of Georgia Medical Partnership in Athens.

“It’s been shown that if you do this over and over again three times a week for an hour per session, that by the end of 12 weeks you will be able to walk twice as far as you did when you started,” said Murrow, who also is a partner in the Athens Cardiology Group. “However, if you just tell somebody to do that, many simply won’t.”

Surgical and pharmacological treatments produce mixed results and have side effects, he said.

Murrow is the principal investigator on a new American Heart Association-funded study to determine if a sophisticated light sensor that distinguishes which red blood cells are carrying oxygen and which aren’t also can signal when patients have pushed far enough before pain hits.

“We want to find a better way to use exercise as medicine for these patients,” said Murrow, who is working with colleagues at UGA and Emory University to directly compare results from the old and new approaches in about 100 patients. “We want to help them continue to enjoy what they like to do. If that’s going grocery shopping without a motorized cart, that is what we want them to do.”

They also want to understand more about why their approach does–or doesn’t–help, so over the 12-week course they will measure blood levels of progenitor cells as well as vascular endothelial growth factor that can aid growth of new blood vessels with exercise. New vessels don’t cure the disease but typically give patients greater pain-free exercise tolerance.

They also are looking at the function and number of mitochondria, a sort of cell powerhouse that converts oxygen into cell fuel.

“Mitochondrial function is not normal in people who have arterial disease, and we want to know if it gets better with a training program,” Murrow said. “We know arterial disease is a problem with the supply, and we are trying to see whether increasing the number of working mitochondria in the muscle helps improve the supply-demand mismatch.”

If the new light measure method works, the scientists want to determine if it can be used easily in a physician’s office without all the research support. They’d also like to develop an application that could work anywhere.

Methods using the light sensor were developed by Kevin K. McCully, a physiologist in UGA’s kinesiology department, to measure oxygen levels in the exercising muscles as well as the number of working mitochondria. It’s similar to the red glowing pulse oximeter placed on hospital patients’ fingertips to measure oxygen saturation, but McCully’s system uses more powerful spectroscopy light that can permeate denser tissue like a leg muscle.