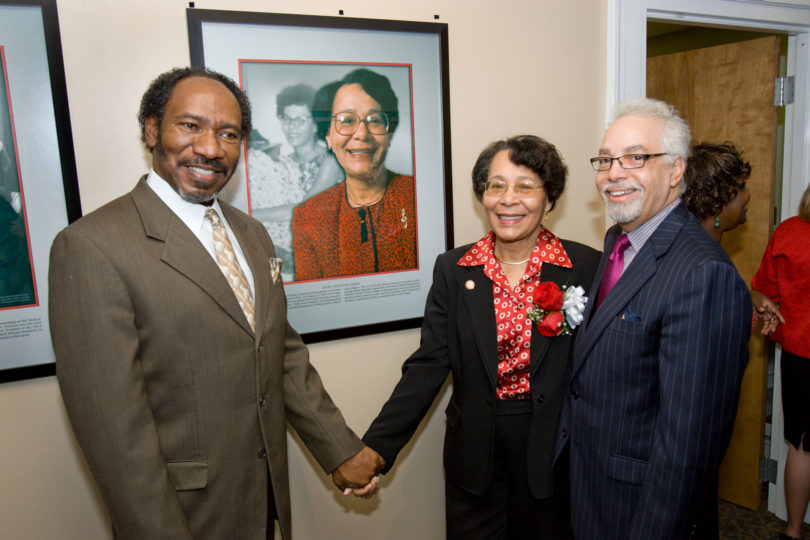 After helping to unveil her portrait

In a Sept. 17 ceremony, portraits of each graduate were unveiled in their new home—the building renamed in 2001 for Hunter and Holmes on the 40th anniversary of the 1961 desegregation of UGA.

In attendance were members of the trio’s families including Holmes’ widow, Marilyn,  as well as Louise T. Hollowell the widow of Donald L. Hollowell, the attorney who represented Holmes and Hunter in their legal fight to attend UGA.

Mary Frances Early, the first African-American to graduate from UGA in 1962, also was on hand for the ceremony, helping to unveil her own portrait.

“It’s a deep honor to be included in a ­permanent exhibit,” Early said.

In a 50-minute program at the Chapel prior to the unveiling, speakers including Provost Arnett C. Mace Jr., Rabbi Justin Kerber and a handful of students spoke about the importance of diversity—of race, gender, religion and ethnicity.

“We have come a long way, but we are not there yet,” Mace said. “We must intensify the effort to recruit and enroll classes that are more reflective of the college-bound population of this state and increase the diversity of faculty, staff and administration.”

Part of Diversity Days, a campus-wide celebration of diversity,  the program included performances by several Latin student organizations who chanted, clapped, stomped and danced to traditional “Salute” and “Stroll,” in celebration of Hispanic Heritage Month. Diversity Days is slated to become an annual event.