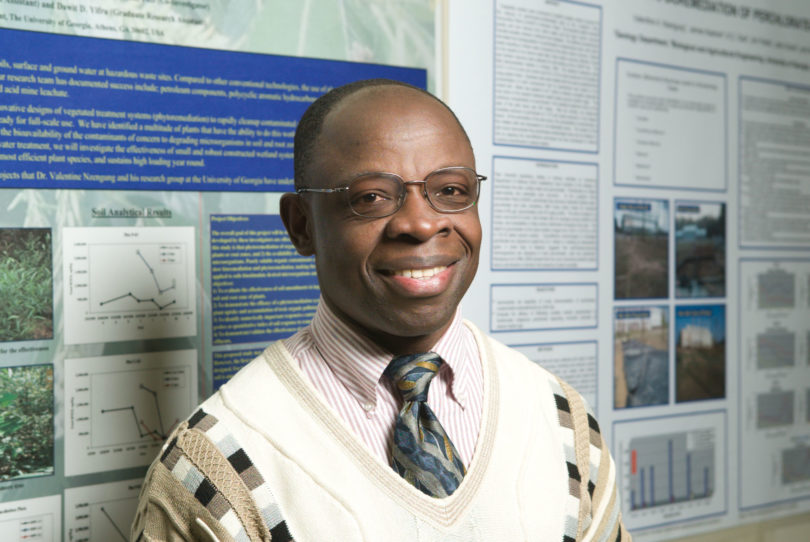 The training, testing and manufacturing required to maintain a ready military that protects national interests has left the U.S. with a legacy: explosives residue from munitions-related activities-production, demilitarization, live-fire training and testing-in soils and groundwater at numerous active and former military installations. Many other nations are faced with this same legacy.

A UGA inventor recently completed two successful demonstrations of a new “green” technology that eliminates explosives residue-munitions constituents-and immobilizes heavy metals. Recognizing this as a potential solution to many of these possible threats to human health and the environment, the U.S. Department of Defense has granted a multiple award remediation contract to the company headed by this UGA inventor and scientist.

The new remediation technology, MuniRem, was invented by Valentine Nzengung, professor of geology in the Franklin College of Arts and Sciences and president of Planteco Environmental Consultants LLC, an Athens-based company. MuniRem provides an effective in-situation treatment of explosive munitions constituents, both in residue and high concentrations on land. It also has applications for neutralization of explosive residues in groundwater and decontamination of buildings used in munitions manufacture and processing.

“These Army-funded tests confirmed the effectiveness of MuniRem as an invaluable tool for cleanup of thousands of current and former military and commercially owned sites where explosive and other munitions constituents present a potential hazard,” Nzengung said. “This product will help eliminate explosive munitions constituents contamination from sites with minimal impact on the environment, allowing them to realize their potential as productive habitats for plants and animals or for reuse by humans.”

MuniRem is greener and more practical, and several orders of magnitude less expensive compared to traditional treatment (decontamination) methods, which often involve removal of soil for treatment and/or disposal. First, it degrades chemical compounds used in munitions to regulatory or non-­detectable levels much faster than competing technologies.

MuniRem also reduces and immobilizes heavy metals, such as cadmium, mercury, chromium, arsenic and uranium, which are associated with munitions manufacture, use and storage. Immobilization prevents these metals from leaching into groundwater, rivers and lakes.

Finally, in contrast to other remediation technologies, MuniRem works at ambient temperature-no heat is required-to neutralize explosive munitions constituents compounds that pose a potential threat to human health and the environment.