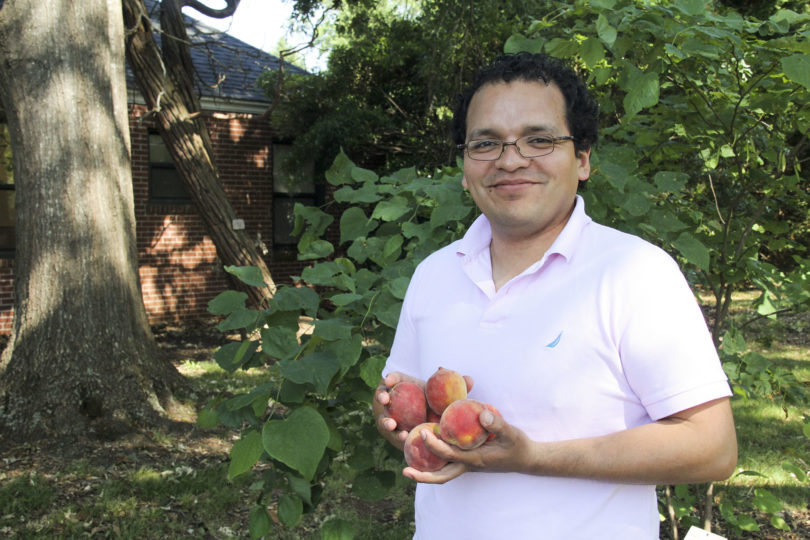 Since joining the College of Agricultural and Environmental Sciences’ Griffin campus March 1, Chavez has been hearing what Georgia peach growers have to say and planning projects to meet their needs.

“I’m trying to learn as much from the growers as I can. I want to know what they are doing [because], after all, they know more about the peach industry in Georgia than anyone else,” Chavez said. “Experience is the best knowledge.”

A member of a fourth-generation Ecuadorian farm family, Chavez learned a lot about raising dairy cows and beef cattle and growing potatoes by watching and listening to his father and grandfather.

So far, Chavez said Georgia peach growers seem to have the same concerns that all farmers have.

“They want to reduce their costs and increase their profit margins,” he said. “They also want to know how to keep the peach trees alive and producing longer.”

“Weather in the Southeast is not very friendly to peaches. Growers fight a lot of insects and diseases,” Chavez said. “And, in the winter, they worry about peach blossoms freezing and their future crop being damaged as a result.”

For now, he is applying for grants to fund peach research projects and installing 60 varieties of peaches on the Griffin campus’s Dempsey Farm. Chavez earned an undergraduate degree in agricultural science and production from Zamorano University.

He had no idea in 2005 when he took an internship with the UGA College of Agricultural and Environmental Sciences’ Distance Diagnostics through Digital Imaging Laboratory that he would one day be working as the college’s peach expert. Chavez helped the DDDI system develop a Spanish manual for its partnership in Central America.

He left Georgia for Ohio State University where he studied the interaction between soil microbes and plants. His internship there was cut short when he was accepted into the master’s program at the University of Florida.

“Peaches are more of a specialty crop there,” he said. “There are a few growers with less than 300 acres, and the fruit they grow is different.”

The difference between Georgia and Florida peaches includes the types and ways they are marketed.

“Georgia peaches are usually melter peaches, which means they break away from the stone,” Chavez said. “Florida peaches aren’t melters. They are clingstones.”