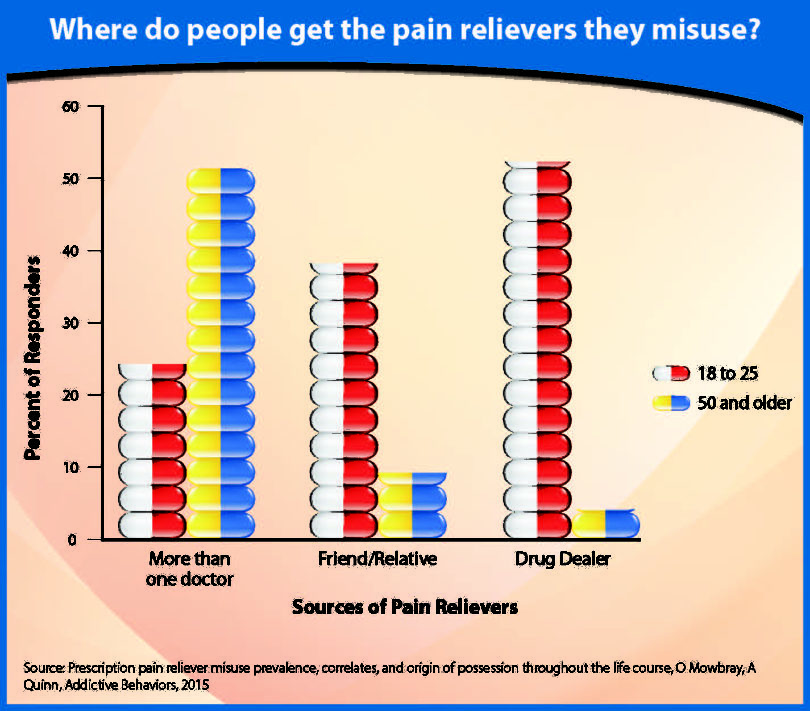 Illicit drug users at increased risk, but differ by age in how drugs acquired

Athens, Ga. – In a nationwide study, researchers from the University of Georgia School of Social Work found that individuals of any age who used illicit drugs such as marijuana, cocaine or heroin within the past year had a higher likelihood of misusing prescription pain relievers as well. A study just released by the Centers for Disease Control, which found that heroin use was highest among those who abused cocaine or opioid pain relievers within the past year, buttressed the UGA research.

The findings, published in the journal Addictive Behaviors, may help health care providers and others curb painkiller misuse.

“Male or female, black or white, rich or poor, the singular thing we found was that if they were an illicit drug user, they also had many, many times higher odds of misusing prescription pain relievers,” said Orion Mowbray, an assistant professor in the School of Social Work and the UGA study’s lead author.

The investigation was based on more than 13,000 responses to the National Survey on Drug Use and Health. The annual survey, sponsored by the U.S. Department of Health and Human Services, collects data on the use of tobacco, alcohol, illicit drugs, prescription drugs, and mental health problems among individuals aged 12 and older.

Prescription pain relievers represent the majority of all prescription drugs that are misappropriated in the U.S., and misuse has risen dramatically in recent years. The most over-used pain relievers are opioids-addictive painkillers such as codeine, oxycodone and morphine.

According to a 2013 report by the Substance Abuse and Mental Health Services Administration, a unit of the HHS, emergency room treatments for opioid misuse-including suicide attempts and accidental overdoses-increased 183 percent from 2004 to 2011.

The reason for the increase is not clear, but the report offers possible solutions to address the problem.

“If we know how people come to possess the pain relievers they misuse, we can design better ways to lower that likelihood,” said Mowbray. “This study gives us the knowledge we need to substantially reduce the opportunities for misuse.”

The study calls for greater coordination between medical care providers to reduce the possibility of over-prescription of painkillers, and for improving the communication between doctors, patients and the public.

“Doctors may conduct higher quality conversations with older patients about the consequences of drug use before they make any prescription decisions, while families and friends should know about the substantial health risks before they supply a young person with a prescription pain reliever,” said Mowbray.

Adam Quinn, a doctoral student in the School of Social Work, contributed to the research. The study, “Prescription pain reliever misuse prevalence, correlates, and origin of possession throughout the life course,” is available online at http://www.sciencedirect.com/science/article/pii/S030646031500194X.