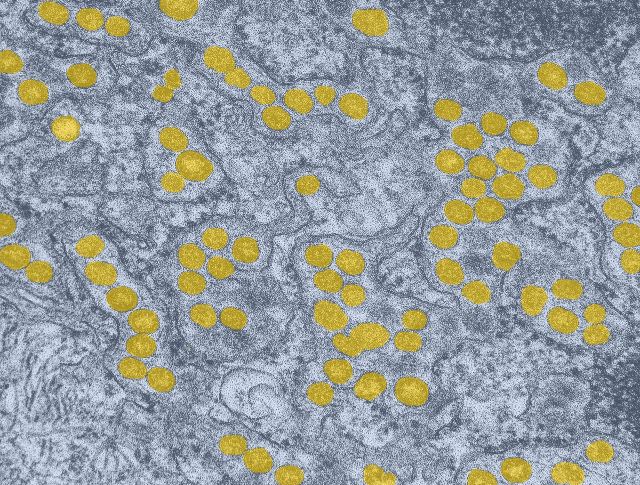 A false color image of MERS coronavirus particles in the endoplasmic reticulum of an infected cell. Middle East respiratory syndrome is a viral illness first observed in humans in 2012.

Athens, Ga. — The delay between the time when a disease outbreak becomes possible and when it actually happens depends chiefly on how frequently infection is introduced to the population and how quickly the number of cases caused by a single individual increases, according to new research from the University of Georgia.

The findings, just published in the Royal Society journal Interface, lay the theoretical groundwork for a disease forecasting system that could give public health officials time to prepare for-or possibly even prevent-certain outbreaks in the future.

Infectious diseases pose a serious threat to public health around the world, as recent outbreaks of emerging diseases such as Zika and re-emerging ones such as measles attest. An early warning system for infectious diseases could not only save lives but also allow public health resources to be used more efficiently and effectively. Developing such a system is the goal of Project AERO, a research collaborative led by John M. Drake, a professor in the UGA Odum School of Ecology, director of the Center for the Ecology of Infectious Diseases, and the study’s senior author. The paper is one of the project’s first outcomes.

In the case of an infectious disease system, the patterns appear in public health case reports and the tipping point is the point at which each infected individual tends to pass the infection on to more than one other person. Once that happens, the population is at risk of an outbreak.

But in most cases major outbreaks don’t occur as soon as they are theoretically possible, according to Christopher J. Dibble, a postdoctoral associate at the Odum School who led the study.

“We know that there’s some amount of delay between the theoretical point and the first major outbreak, and this effort was aimed in part at finding some likely values for that waiting time and in part to discern what drives it,” Dibble said.

With his colleagues, Dibble developed a mathematical model representing a population made up of people susceptible to a disease, people currently infected by the disease and people recovered from the disease and therefore immune. They incorporated parameters such as host birth and death rate, disease transmission rate, rate of recovery, population size and the rate of infection from external sources.

The researchers then ran thousands of model simulations based on different disease systems.

They found that two factors had the most influence on the length of time between tipping point and outbreak. The first was the speed with which the pathogen’s basic reproductive ratio increases as the tipping point nears.

“The faster you approach that transition, the less waiting time you’ll have,” Dibble said. “That’s one of the main additions to the existing theoretical work that this paper addresses.”

The findings are important for several reasons, according to Dibble. One is that they will allow public health experts to gain insights into the drivers of outbreaks and epidemics.

“Once we understand this waiting time, we can learn from past epidemics,” Dibble said. “Using some of the modeling approaches that we’ve taken here we can extrapolate backward. If we had an epidemic in March, for instance, it’s really tempting to assume that something must have happened in February or January to cause this population to change in a way that allowed it to experience this outbreak. But the problem is that the important change might have happened well before that. If we don’t account for the delay between an actual outbreak and the point at which it was theoretically possible, we may be looking in the wrong place for the driver.”

Equally important is being able to provide an estimate of the likely delay between tipping point and major outbreak for a given disease system and population.

“The goal of Project Aero is not so much to tell us how to curb an outbreak once it’s started as to gain more lead time on knowing that an epidemic’s coming,” said postdoctoral researcher Eamon B. O’Dea, one of the paper’s co-authors. “Depending on the disease, officials might use the time to try to increase resources for treatment, initiate a pulse vaccination campaign, or do whatever they think will most reduce the risk,” he said.

Dibble said that the team hopes eventually to develop an early warning system that can predict both when an outbreak becomes possible and how long the delay until the first major outbreak is likely to be.

“It will never be as clean, unfortunately, as saying ‘six months is how long you have to wait,'” Dibble said. “But we hope to be able to offer a range of possible values: It could happen on day one or it could happen a year or two later. I’d love to see that in practice. We have a lot more work to do to get it there, but this is a big first step.”