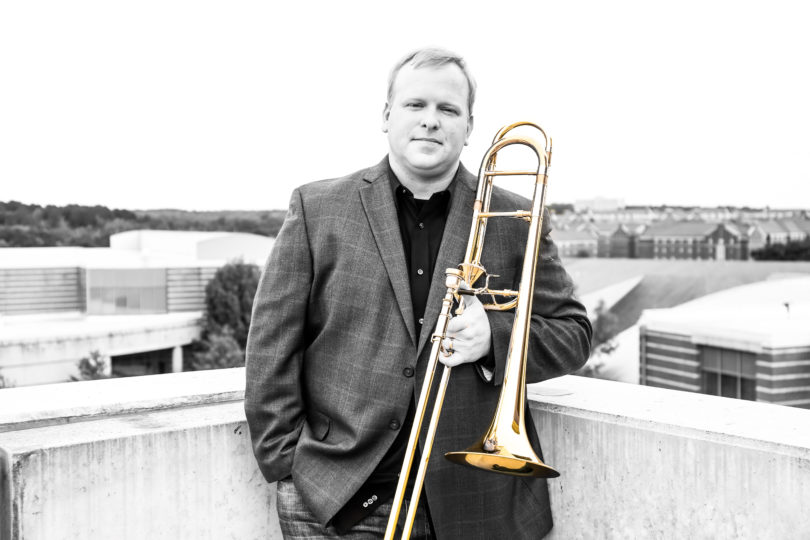 Josh Bynum takes the Ramsey Hall stage as part of the Faculty Artist Series on March 6.

The Faculty Artists Series continues March 6 with Brass Area Chair Josh Bynum on trombone and Anatoly Sheludyakov on piano. The concert will be held at 8 p.m. in Ramsey Hall.

The concert features predominantly American composers and has a mix of styles that pay tribute to the classical and jazz traditions of the trombone. Audiences can expect to hear everything from Moon River to a mashup of American blues and Arabic drones, and everything in between.

“My program has a balance of music originally written for trombone and songs that I’ve ­‘borrowed,’ ” Bynum said.

An associate professor of trombone at UGA’s Hugh Hodgson School of Music, Bynum is no stranger to universities, having received degrees from Temple University, the University of Iowa and Jacksonville State. Among other accolades, Bynum was the featured artist for the 2017 International Trombone Festival held at the University of Iowa.

Working with other UGA musicians has been part of Bynum’s performance history, so it’s no surprise that he brought in UGA resident accompanist Sheludyakov to play with him for this concert.

“It’s always such an amazing experience to collaborate with Anatoly Sheludyakov, who is undoubtedly one of the finest musicians I know,” said Bynum of the pianist.

Tickets for the concert are $12 for adults and $6 for students. They can be purchased online at pac.uga.edu or by phone at 706-542-4400. For those unable to attend the performance, the concert will be streamed at music.uga.edu/streaming. For more information, visit music.uga.edu.