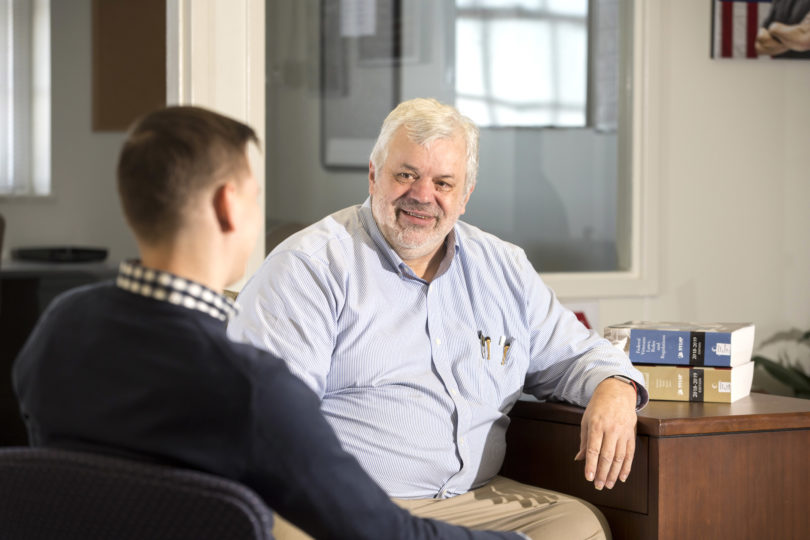 Associate professor Alexander W. Scherr has made his mark on the world in several ways—whether for exceptional contributions to clinical legal education or for participating in the Favorite Poems Project as one of only 50 people to have a video of his reading and discussing his favorite poem archived in the Library of Congress. 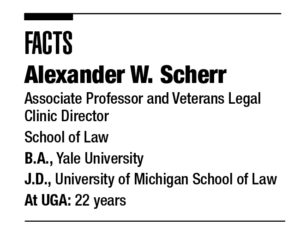 This month, Scherr will receive the pre-eminent national award in clinical education: the 2019 William Pincus Award for Outstanding Service and Commitment to Clinical Legal Education. This honor recognizes individuals or institutions for service, scholarship, program design and implementation, or any other activity beneficial to clinical education or to the advancement of justice.

“I’m extremely gratified by the award,” he said. “It is solid recognition for a lot of hard work over several decades.”

Scherr is the director of the School of Law’s Veterans Legal Clinic and formerly its associate dean for clinical programs and experiential learning. Since arriving in Athens in 1996, he has been instrumental in developing the law school’s robust clinic and externship courses, which teach students about law and lawyering through work on real problems in the real world. He also has served as an advocate and consultant for clinical legal education nationally, and he has played an active role in reforming the American Bar Association’s standards for externship courses.

Scherr became interested in working in academia after serving as a visiting law professor in New England for the 1995-96 academic year. That was when he realized professorial life was the path for him.

“I had been a teacher, lawyer and mediator for over a decade in my home state of Vermont,” he said, “but I had never really thought about shifting my career to law teaching until this came up.”

Shortly thereafter, Scherr found his way to the UGA School of Law, which was then hiring a director of civil clinics.

At that time, the law school’s clinics were primarily in the criminal justice arena, and the school was seeking to expand its offerings. The school’s faculty contemplated the creation of a series of smaller-scale, topically focused clinical programs that would expand the range of real-world practice opportunities into the civil law arena.

Scherr first taught the school’s Public Interest Practicum, a counseling clinic in which students meet and give legal advice to people who cannot afford lawyers. Scherr also created the Civil Externship course, offering students the chance to work for credit with judges, nonprofits and government agencies in northeast Georgia. For the next two decades, he helped the school to expand its clinic and externship courses.

“You really do feel as if you’re making a difference, both for immediate crises and for longer-term needs,” he said.