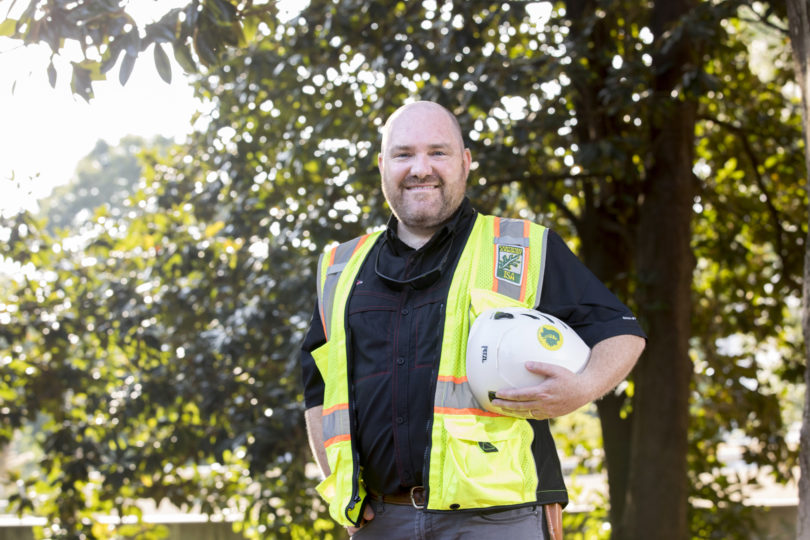 Jason Gordon is hoping to bring community forestry to the forefront as a faculty member in the Warnell School of Forestry and Natural Sciences’ new program. (Photo credit: Dorothy Kozlowski) 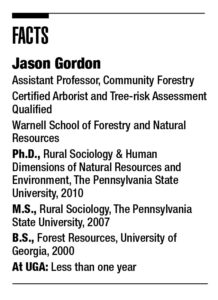 Now, as a new faculty member in the Warnell School of Forestry and Natural Resources, he’s helping to create a more direct path for future community foresters. Gordon is part of a new degree emphasis in community forestry and arboriculture now offered by Warnell, and by earning a Bachelor of Science in Forest Resources in this area, students now have direct access to this diverse and growing field.

“I’ve been doing this about eight years now, and I firmly believe that tree canopy management in an urbanizing context is going to be increasingly critical to people’s well-being,” said Gordon, an assistant professor. “With community forestry—for those of us who have had experience with more traditional types of natural resource management—we talk about how dynamic it is. The issues are unique, and it always relates back to the human dimension.”

Gordon arrived this past summer, coming to the University of Georgia from Mississippi State University, where he also taught in a community forestry program. But he’s familiar with Athens—this is where he earned his undergraduate degree in 2000, studying forest business.

He’s the first to admit, though, that the business of managing city trees was not his calling.

“I was in a student Society of American Foresters meeting, and Kris Irwin came down to talk to us,” Gordon said.

The concept, said Gordon, blew him away.

“We thought, ‘What’s he talking about?’ ” said Gordon.

Gordon went to work for the U.S. Forest Service after graduation. Then he joined the Peace Corps, where he worked in Latin America. There, urbanization is happening at an extremely fast rate and the need to address urban environmental issues was great.

After a few years, Gordon decided to go back to graduate school, hoping to wrestle the environmental and natural resources management experience he’d earned into a more focused field. His master’s degree project while at Pennsylvania State University focused on understanding wildfire risk perceptions at the interface of wildland and urban areas. It then turned into a doctoral project that was funded by the Pennsylvania Department of Conservation and Natural Resources.

At Penn State, Gordon also realized that his real-world experience wasn’t just happenstance—there is a growing need for professionals who understand the needs of trees in urban and suburban environments, but few degree programs exist. The field is naturally transdisciplinary, incorporating science, nature, new technologies and working with the public. But like Gordon, until recently most professionals came to the field through a variety of routes.

That’s changing, though. Gordon notes an increase in interest and funding to address landscape-scale environmental issues viewed through an urban context, and there’s a greater need to manage trees from the perspectives of risk or ecosystem benefits.

“I fell into it, but it’s been really nice to be able to bring it all together into a transdisciplinary approach,” he said, noting the benefits that trees bring to communities. Whether it’s through recreation, home values or just shade, trees are a perk that more people are now coming to fully appreciate.

“It’s fun—we’ve got a good team here, and it’s fun to be on a team that’s working toward the same goals as far as student instruction and outreach,” said Gordon.