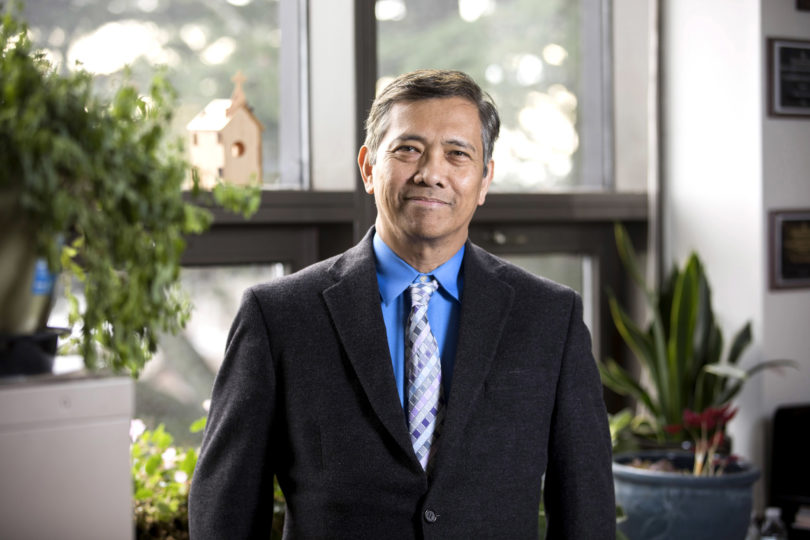 For Cesar Escalante, the tenets of fairness and humanity tie together as major themes that flow through his research and mentorship at the University of Georgia.

A native of the Philippines, Escalante joined UGA’s College of Agricultural and Environmental Sciences in 2001, and for two decades, his research has investigated issues of social significance on Georgia’s farms, including immigration concerns, disparities in loans and labor shortages.

“People sometimes think I do research about immigration because I’m an immigrant, but in reality, this research on farm labor came about because the farmers themselves raised the issue to me about their businesses not doing well,” said Escalante, who is a professor of agricultural and applied economics.

As part of his service-oriented research with UGA Cooperative Extension, Escalante traveled to farms around Georgia to discuss agricultural economics, where he discovered major concerns about labor and immigration.

“It’s not that the farmers wanted to keep immigrants in their fields but that they seriously needed help,” he said. “One farmer in south Georgia asked his son to stop going to school and his son-in-law to shift jobs in order to salvage the blueberries that were rotting away in the field because he couldn’t find anyone to work in the unbearable summer heat for the wages he could offer.”

“Farmers shared their experiences and frustrations about not getting approved or not receiving fair treatment in terms of interest rates, and I began pulling together borrowing data to validate the allegations,” he said. “We’re still revisiting and looking at other dimensions of borrowing issues for racial and gender minorities, as well as the guest farm worker visa program.”

Escalante’s research opened up opportunities for mentorship, as graduate students naturally began to gravitate toward his work. Minority students, in particular, appreciated his viewpoint, advice and exploration of racial and gender equality.

“Since I was a minority student myself, I understand the challenges they have. I always make a point of talking about the challenges and helping those who feel like they don’t fit in,” he said. “They open up about their problems, and I share my stories about inferiority and insecurity from the past.”

“My graduate students are eager to work on this research, and at a land-grant institution like UGA, I’m free to do the service-oriented applied research that I enjoy,” he said. “It’s telling that everyone in the department tends to stay in their positions for decades and retire here.”

For his research, mentorship and service, Escalante has earned numerous awards during his career, including the 2019 First-Year Odyssey Teaching Award, the CAES Faculty Diversity Award and the departmental Outstanding Faculty Member three times. Most recently, he was awarded the 2020 President’s Fulfilling the Dream Award. Presented at the Martin Luther King Jr. Freedom Breakfast on Jan. 17, the award recognizes those in the UGA and Athens-Clarke County communities who have worked to make King’s dream of equality and justice a reality.

“It’s a great honor to receive this award, and I feel humbled,” he said. “For me, the biggest payoff comes when I see my students successfully overcome their obstacles and find wonderful opportunities. Even after they graduate, we stay in touch and help each other.”