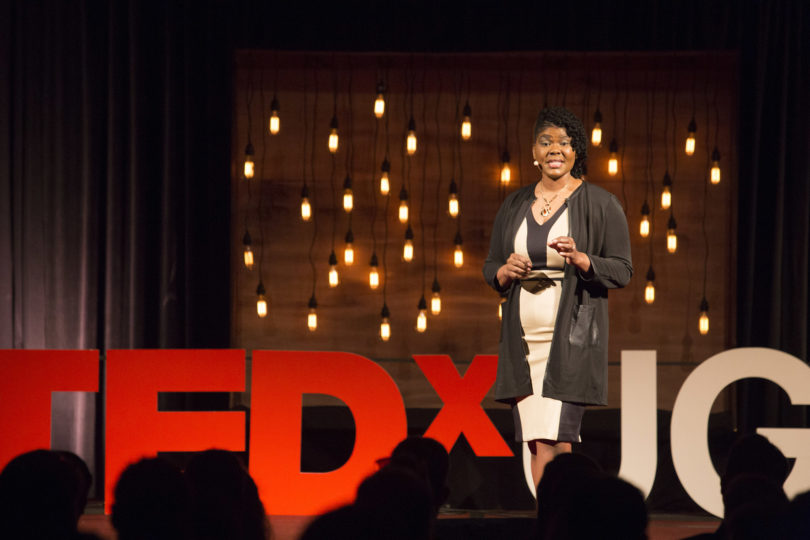 From prison labor reform to using bioinformatics as a tool for conquering disease, and from looking at the positive side of parasites to reviving an old postal service concept to address 21st-century challenges, UGA faculty, students and alumni pitched their “ideas worth sharing” at TEDxUGA on March 18.

The event, inspired by TED Talks conference, was held in the Grand Hall of the Tate Student Center in front of a sold-out audience.

Johnelle Simpson, UGA’s Student Government Association president and emcee of the event, predicted the presenters’ ideas “will illuminate the future, and all it takes is one single spark.”

The event was organized by the TEDxUGA steering committee made up of faculty, staff and students from across campus.

With more than a dozen presentations, the event gave faculty members like Jeb Byers, associate dean and professor in the Odum School of Ecology, a chance to translate his research on parasites into an entertaining presentation for a diverse audience.

Byers explained how parasites, generally maligned in popular thought, actually can help scientists gauge the health of some ecosystems.

Some types of parasites complete their life cycles passing through the gut of several animals as each is consumed up the food chain. And so, Byers said, parasites can act as a “canary in the coal mine.” If parasites are missing in certain species, it could be an indication to scientists that the ecosystem is out of balance.

John F. Greenman, a part-time professor in the Grady College of Journalism and Mass Communication, gave a compelling argument that the grueling and often dangerous labor required of prisoners in the U.S. is a form of state-sanctioned slavery.

“This isn’t about punishment or rehabilitation; it is about saving taxpayers’ money,” said Greenman, who argued that prisoners should be paid for their work, with part of that payment going toward taxes, family support, savings and victim restitution.

Mehrsa Baradaran, the J. Alton Horsch Associate Professor of Law at UGA’s School of Law, presented a strategy for how to provide trustworthy banking for the poor. Baradaran’s idea is to enable banking through the U.S. Postal Service.

Baradaran argued that existing banks no longer have the interest of the poor in mind, and payday loans often prey on the vulnerability of the poor.

Because there are post offices in every community across the U.S. and because the Postal Service remains a trusted agency, Baradaran said the USPS should be empowered to provide community banking.

“We see our postal service as being a dinosaur, but we don’t see it as a shark,” she said.

In fact, Baradaran pointed out that the agency actually provided community banking in the early- and mid-20th century.

The tone of the presentations varied from stimulating to emotional. Spencer Hall, a senior statistics major, gave a reasoned but personal glimpse into the promise of bioinformatics, an emerging field that uses software tools to understand biological data.

Hall shared how, with bioinformatics tools, DNA may be the Rosetta stone for treating diseases. Hall took the example of cystic fibrosis, a deadly genetic disorder that affects the lungs. With bioinformatics, geneticists may be able to develop treatments for the now incurable disease by identifying and then targeting the genes responsible for the disorder.

And then Hall shared that he has CF, and this research, which he hopes to pursue, could affect his own survival.

“Our lives depend on our ability to understand how the defective gene works,” Hall said.