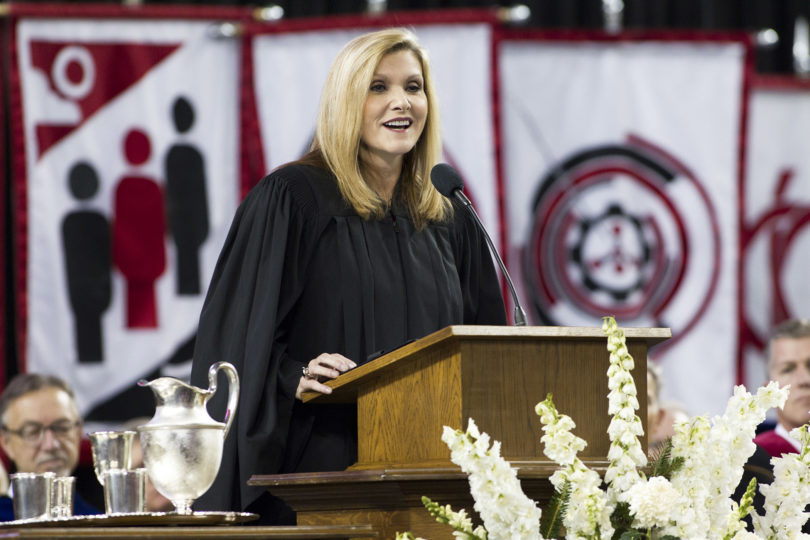 Commencement speakers encourage graduates to determine their own paths

There is no shortage of prognostications about how the millennial generation will make its mark on the world. Donna W. Hyland, president and CEO of Children’s Healthcare of Atlanta, told fall UGA graduates that it is up to them to decide how they would be remembered.

Hyland, the Commencement speaker at the undergraduate ceremony Dec. 18 at Stegeman Coliseum, said she often meets with CEOs and talks about this generation.

“We don’t know what to think of you. You are described as civic-minded, confident and tolerant. Some say that you are entitled and even narcissistic,” she said. “You can believe those things or you can believe that you have an extraordinary opportunity ahead. Only you can truly define you.”

For the two fall Commencement ceremonies, 1,742 undergraduates and 1,065 graduate students—a total of 2,807—met requirements to walk in the ceremonies held at Stegeman Coliseum.

While Hyland, in her address, challenged graduates to determine their own path, she also offered some advice for making their careers and lives more fulfilling.

“When I graduated from college, I really thought that what I had learned in school and hard work would be the keys to success,” she said. “That was important, but the further I got in my career, I learned some lessons that I wish I would have known much earlier.”

Her first piece of advice was to put people first. She offered some examples of what Children’s Healthcare employees have done for patients—like a nurse who shaved her head as a show of solidarity to a child on chemotherapy or a group of workers who threw a prom—complete with a disco ball, a dance band and limos—in the hospital for a dying high schooler so that she could experience prom.

“When you put people first—your family, your friends, those you work with and people that you barely know—it will make a difference,” she said.

She also encouraged students to take care of themselves.

“Trust me,” she said. “As a health care professional I can tell you: You need to be healthy both physically and mentally to be at your best.”

One common theme between the CEO and undergraduate student speaker Madeleine Hill was the need to learn from failure.

Hill, a sociology major from Decatur, told her classmates they didn’t have to be afraid of failure. She recalled the first C she got in an Honor’s class her freshman year at UGA. She remembered breaking into tears when she saw the grade on her computer in the Miller Learning Center.

“For me, this C meant that I failed,” Hill said.

But a fellow student—a stranger—told her, “You’re going to be OK. Trust me.” Hill said she learned from that C, and from surviving it, that it was OK to challenge herself and take risks.

“Failure makes us vulnerable. It makes us want to curl up and watch Netflix for the rest of our lives,” she said, but it also offers opportunities for growth and self-realization. “Be the person you want to be in this world, not the person others think you should be. You’re going to be OK. Trust me.”

In the graduate ceremony, Cheryl Davenport Dozier, the 13th president of Savannah State University, called on students to exercise social justice as they pursue their careers.

Dozier, who spent 17 years at UGA including as associate provost and chief diversity officer, challenged degree recipients at the graduate ceremony to be “agents of change” who take a stand for diversity and equality in their workplaces and beyond.

“As you climb, use your hands to reach down and help someone, both young and not so young, to rise up and reach the next landing no matter their race, their class, their gender, their ethnicity, their religion or their sexual orientation,” she said. “Know that your hands hold the solutions to possibilities of a more global, united world.”