From the trees that beautify Georgia’s landscapes to the cows that produce milk to feed Georgia families, agriculture in this state is diverse and faces a wide range of challenges. University of Georgia President Jere W. Morehead and state leaders learned more about these challenges and Northeast Georgia’s farms, nurseries and the agritourism industry Tuesday during the annual farm tour.

“As a land-grant institution, the University of Georgia is committed to helping our state’s agriculture industry thrive,” said Morehead. “Today we were reminded not only of the far-reaching scope of agriculture in Georgia but also of the vital partnership between the university and farmers across the state.”

This is the fifth consecutive year Morehead has joined Georgia’s Commissioner of Agriculture Gary Black and members of the Georgia General Assembly to visit Georgia farms and food-based businesses around the state since becoming president of UGA. In 2013, the delegation visited farms in northwest Georgia; in 2014, they visited southwest Georgia; in 2015, they toured the northeast region of the state; and in 2016, they visited farms in middle Georgia.

“Our state’s agriculture is exceptionally diverse, and I believe our tours over the past five years have mirrored that diversity,” Black said. “This year’s focus really highlights the value of continued collaboration between the department and the university, especially in the green industry. It is always gratifying to witness firsthand the results of ongoing cooperation between our farming community and those who support it.”

“Our college is committed to research that helps Georgia agriculture meet today’s complex challenges and stay on the leading edge in agricultural technology and sustainability.” — CAES Dean Sam Pardue

UGA researchers and Extension experts are committed to understanding the challenges that face Georgia’s $13 billion agriculture industry and finding solutions for Georgia farmers.

Agritourism, the green industry and dairy production all play key roles in Northeast Georgia’s agricultural economy, and the delegation explored aspects of all three industries.

The tour began in Colbert at James Greenhouses, which grows a wide variety of ornamental perennials as wells as UGA-developed blueberry cultivars.

They went on to see the production of other UGA-bred ornamental varieties at Griffith Propagation in Watkinsville and visited Select Trees in Crawford. Select Trees, which grows large shade trees for transplant, has donated hundreds of trees to UGA over the past decade.

The last nursery grower on the tour was Evergreen Nursery in Statham, a wholesale nursery that was able to cut its water use drastically by implementing a smart irrigation system developed by UGA horticulture researchers.

Ornamental horticulture, which ranges from the production of houseplants and landscape shrubs to turf and shade trees, contributes $831 million to Georgia’s economy, according to the UGA Center for Agribusiness and Economic Development.

In addition to nursery visits, the group visited a dairy and a farm market in Morgan County, both of which are owned by UGA alumni. 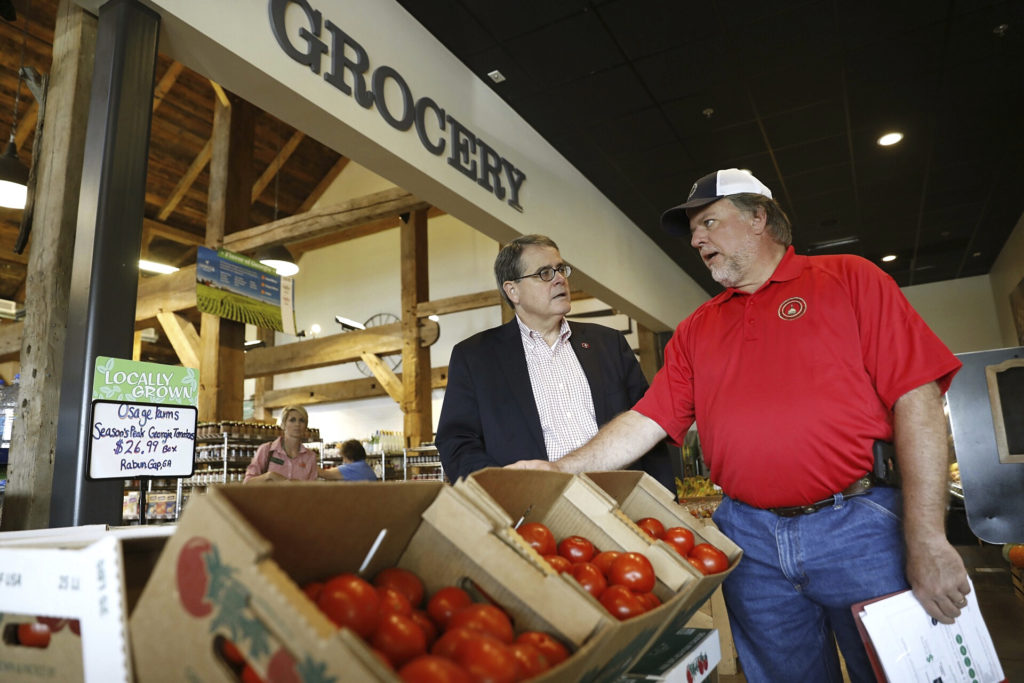 Farmview Market, the brainchild of 1980 UGA CAES graduate Keith Kelly, is a combination butcher shop, specialty food shop, restaurant and farmers market that draws thousands of travelers each week. Kelly conceived of the farmers market complex, which opened in 2016, as a way to connect “farms to families.”

Williams Dairy, the tour’s second stop in Morgan County, is home to 3,700 cows and is operated by Georgia 2017 Farmer of the Year Everett Williams. Williams graduated from UGA in 1975 with a bachelor’s degree in dairy science.

His reputation for cutting-edge technology and civic leadership has earned him a worldwide reputation as a leader in Georgia’s $278 million dairy industry.

Dairy farmers from other countries often stop at the Williams Dairy to see how he is using the latest technology to produce milk more efficiently.

At each stop, farm and nursery managers shared ways in which UGA has contributed to their success and ways that the university could help in the future.

“Our college is committed to research that helps Georgia agriculture meet today’s complex challenges and stay on the leading edge in agricultural technology and sustainability,” Pardue said. “UGA Extension works across the state, in every county, to put those new discoveries into practice on farms and agricultural operations, and we are training the next generation of agricultural leaders and producers in our classrooms and laboratories every day.”