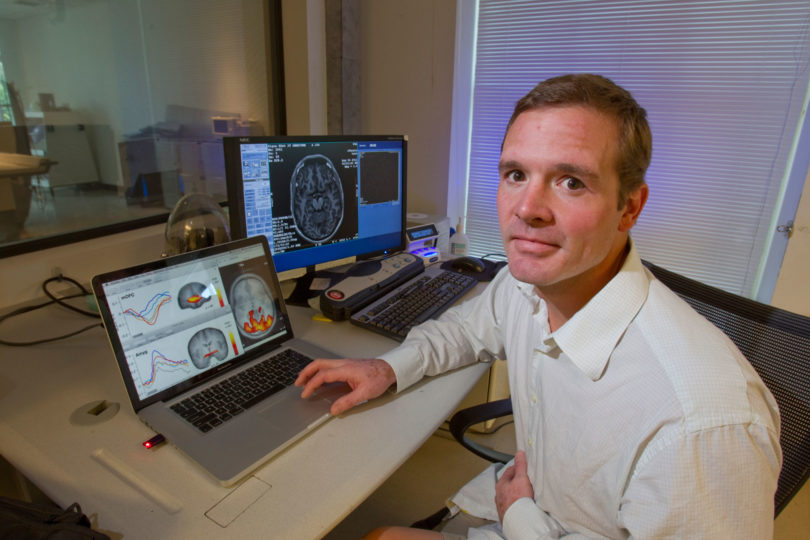 A faculty member at UGA for three years

Dean Sabatinelli is a not a loud man. A visitor has to lean forward to hear him talk about his ongoing research at UGA, where he is a neuroscientist in the department of psychology.

Sabatinelli uses magnetic resonance imaging to study how the brain processes emotional stimuli, and though he’s only been at UGA for three years, he’s already publishing a steady stream of papers in journals about his work—an area where much remains to be learned.

But once outside his academic turf, Sabatinelli roars. Though few on campus know it, he is a world-class motorcyclist with nearly three dozen class land speed records to his credit, including one run where he reached an astonishing 269.776 mph at, of all places, a former runway on a decommissioned Air Force base in Maine.

“In my academic life, I try to be a cautious and rigorous scientist,” Sabatinelli said. “So people are sometimes surprised by what I do in my off-time, that I do something so seemingly dangerous.”

Yet Sabatinelli said it’s far safer than the much more widespread sport of motorcycle road racing. He only competes with the clock, and he does it on the track in Maine, another decommissioned Air Force base in North Carolina and on the legendary Bonneville Salt Flats in Utah, where drivers have set many land speed records.

His research at UGA is helping science better understand the basic biology of emotional discrimination. What happens to someone’s brain, for instance, when they see a picture of a terrible auto accident or an image of a couple embracing? To help find out, volunteers look at a series of images projected into fiber-optic goggles while their brains are being imaged using MRI. Sabatinelli then measures blood flow in the brain to see how it processes a scene over time.

But what happens to the brain at speeds of nearly 300 mph on a motorcycle? Sabatinelli, a rider since age 8, acknowledges that what he does while pursuing land speed records might change how his own brain reacts to such a thing.

“The more times you do it, the slower the whole process seems,” he said. “And when you’re riding at high speed, you only see what’s far in front of you.”

Sabatinelli is married to Leslie Boby-Sabatinelli, the coordinator of volunteers for Athens-Clarke County, and they are the parents of an 8-month-old son, Benjamin. His new situation in life has been a delightful change, he said, and his marriage and the arrival of Benjamin mean that when he’s been on the road at events, he’s thinking most of the time about getting back home.

His current motorcycle is a Kawasaki ZX10R, and he holds 16 class land speed records on it. (There are many “classes” for different types and configurations of motorcycles, just as there are for cars). It packs a staggering 450 hp. Sabatinelli holds another 17 records on a different bike, owned by Bonneville veteran Scott Guthrie.

He came to UGA from the University of Florida, where he finished his doctoral degree. Colleagues there were just as surprised as ones at UGA to discover his speed records.

“The folks I work with. . . at the Center for the Study of Emotion and Attention are fine with my hobby,” he told The Gainesville Sun in 2006, “but they worry a bit about my brain, which they have invested a good deal of time in.”

While he continues to push the frontiers of brain-imaging and emotion neuroscience and also teaches as part of the Behavioral and Brain Sciences Program, he is looking ahead to another project that interests him: understanding what pushes adolescent males to drive fast and recklessly and endanger themselves and others.

Sabatinelli, cautious and as focused as ever, is himself fully in control when he’s on a motorcycle. For a man who studies emotions, he’s able to keep his own in check while setting world records.