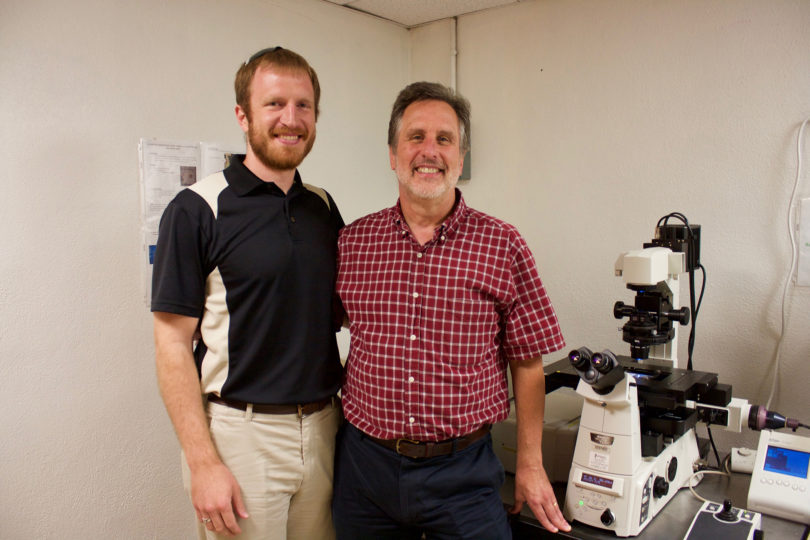 Both father and son recall it like it happened yesterday.

Fred Quinn piled his family into the car and headed up State Route 316 to the University of Georgia, where he helped his son Shannon compete in the 1999 science fair state finals.

A lot has changed since then—for starters, they’re both now faculty at UGA—but the father and son Quinn are once again back in scientific ­collaboration.

Both are co-principal investigators for a National Science Foundation research grant looking at the impact of large-scale data collection on scientists’ ability to efficiently track infectious diseases—essentially, investigating how to automatically track the effects of infections over time to better understand their induced physiological changes. The three-year grant is titled “Large-scale Analysis of the Evolution of Organellar Social Networks.”

The Quinns’ working theory: If bio-imaging software can efficiently represent cells and their inner structures as “social networks,” then biologists can gain further insight into infectious disease behavior and give public health professionals a better chance at combatting those diseases.

Fred Quinn, head of the College of Veterinary Medicine’s infectious diseases department, brings the biology background, and Shannon Quinn, an assistant professor jointly appointed to the Franklin College of Arts and Sciences’ cellular biology and computer science departments, is creating the software. The Quinns are collaborating with Chakra Chennubhotla, an associate professor in the computational and systems biology department at the University of Pittsburgh School of Medicine who is the lead principal investigator on the grant, and Barbara Reaves, an associate research scientist in UGA’s infectious diseases department. Shannon Quinn studied under Chennubhotla while pursuing his doctorate through a program jointly offered through Carnegie ­Mellon University and the University of Pittsburgh.

“It has created an interesting dichotomy, where we both came from completely different ends of [science] and can bring different approaches to the research table, but still have a really good cooperation,” Shannon said.

Fred Quinn joined UGA’s infectious diseases faculty in 2002. He watched his two daughters, Sarah and Colleen, and wife, Joanne, matriculate into and graduate from UGA in 2011, 2013 and 2011, respectively. Shannon Quinn is the self-proclaimed black sheep of the family—or in this case, Yellow Jacket. He graduated from Georgia Tech in 2008, then got his master’s degree from Carnegie Mellon University. He came to UGA in January 2015, after completing his doctorate.

Though each Quinn has different research interests, they collaborated on this particular project because both had specific research questions that begged the other’s expertise: For Shannon, how to efficiently quantify biological processes through large-scale video imaging; and for Fred, how to efficiently standardize the imaging process to better understand infections, particularly tuberculosis, over time.

“We can do these infection [experiments] and sit at a microscope for 48 hours, which is extremely inefficient,” Fred said. “Or, we can figure out how to quantify it,” added Shannon.

One year into the grant, the researchers have nailed down the methodology and solved procedural issues, like which dye will work best to tag their particular cell structures of interest. The dye is important because it visibly separates the tagged cell part from the rest of the cellular network, differentiating certain movements and environmental responses. If the dye fades or over-stimulates the rest of the cell, it’s back to square one. To track the shape, quantity and spatial distribution of a cellular network, the cells have to stay alive and under the scope for long periods of time, which is easier said than done.

“We had to spend the first year getting the protocol right, so we had cells that we could infect and that we could follow the physiological changes of as a result of that infection,” Shannon said. “We had to solve all the imaging problems, like light stability and dye, so we can have data to then write the software—and we’re finally there now.”

The next year will be spent mostly developing Shannon’s software. He and his student team have built models based on preliminary cellular experiments. They now are starting the long journey of testing and improving the algorithms to best meet the needs of analyzing 48-hour cell tracking data.

The final year will be spent applying the software to actual human cells infected with tuberculosis bacteria and tracking those changes over time.

NSF grants differ from others because they fund “bench to bedside” solutions to everyday science questions. It forced the father and son team to look differently at problems they were having in their separate labs, they said-and like any good collaboration, each trusted his partner to help look at the problem from a fresh set of eyes. Fred adds that tuberculosis has been studied for 150 years, yet still is the most-deadly disease on the planet.

“There’s just not a lot of traction there—we needed a new approach, rather than from just the same disease perspective,” he said. “This software can be applicable to many different areas of public health.”

The researchers suggest that their software could be used for everyday public health needs, like toxin screens, and they plan to make it openly available to other researchers once finalized.

The Quinn team genuinely enjoys working together, and they don’t miss a beat. They finish each other’s sentences and have the benefit of pursuing a professional relationship that has been vetted by 30 years of personal rapport.

“We know how each other works and at the same time we bring different talents to the table, which makes it interesting,” Shannon said.

With a big smile, Fred agrees and added, “It’s been a blast, and I couldn’t imagine a better partner.”