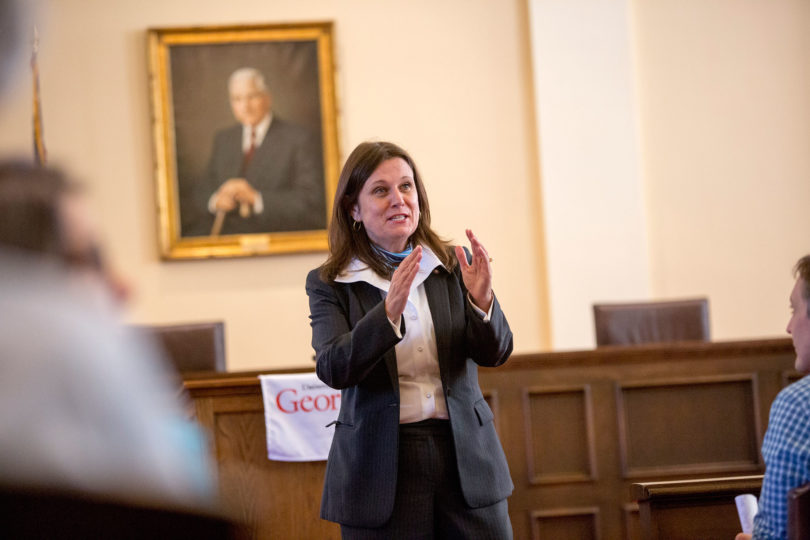 To Lisa Godbey Wood, sentencing is the most fascinating thing that happens in a courtroom.

“More than any other area of law, sentencing holds up a mirror to society and shows us who we are,” she said. “What we see in that sentencing mirror says a lot about us—who we punish, how we punish them and how long we punish them.”

Wood, chief judge of the U.S. District Court for the Southern District of Georgia and the inaugural B. Avant Edenfield Jurist in Residence at the School of Law, spoke about the importance of the sentencing process Oct. 13 as part of the fall Signature Lecture series.

In her almost 10 years as a federal judge, Wood estimates that she’s
sentenced nearly 1,000 defendants for everything from stealing endangered turtle eggs to human trafficking, and the punishments have been just as varied. When considering a sentence, she turns to gifts from two mentors—an ancient Roman coin depicting Clementia, the Roman goddess of mercy, and a plaque bearing the Adam Smith quote “Mercy to the guilty is cruelty to the innocent.”

“Even if we all agree on why we’re sentencing and what the factors should be, it’s hard to agree on what measure,” she said. “It’s a like a recipe that only tells you the ingredients.”

According to Wood, sentences can have several purposes. They can suffice as retribution. They can serve as a deterrent. They can be used to rehabilitate defendants.

Wood said that she does see promising reform for the sentencing process on the horizon. She mentioned that several states, including Georgia, are experimenting with ideas and taking a lead in those reforms.

According to Wood, the person who will decide the sentencing matters. Sentencing guidelines have helped ease some disparity among sentences while still allowing judges to take into account personal things about the defendant or details about the crime.

“One thing I’m urging my students to do is to consider that as a specialty,” she said.