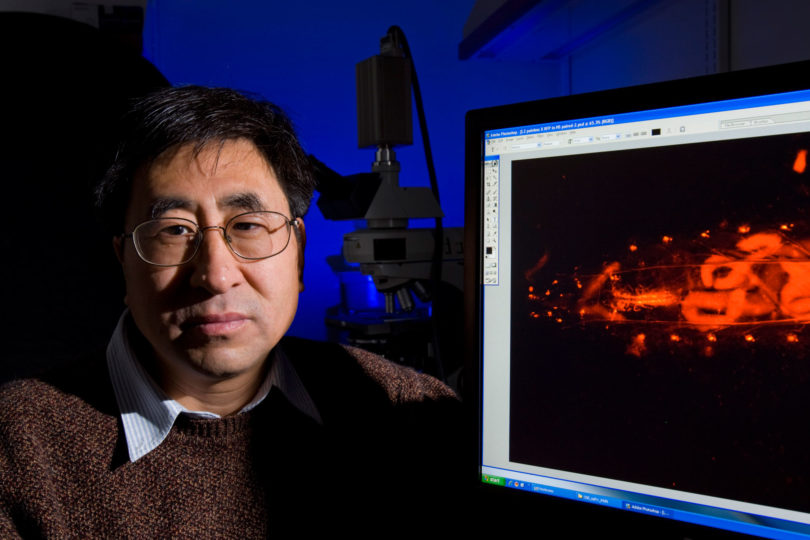 New UGA research has identified the neural pathways in an insect brain tied to eating for pleasure, a discovery that sheds light on mirror impulsive eating pathways in the human brain.

“We know when insects are hungry, they eat more, become aggressive and are willing to do more work to get the food,” said Ping Shen, an associate professor of cellular biology in the Franklin College of Arts and Sciences. “Little is known about the other half-the reward-driven feeding behavior-when the animal is not so hungry but they still get excited about food when they smell something great. The fact that a relatively lower animal, a fly larva, actually does this impulsive feeding based on a rewarding cue was a surprise.”

The research team led by Shen, who also is a member of the Biomedical and Health Sciences Institute, found that presenting fed fruit fly larvae with appetizing odors caused impulsive feeding of sugar-rich foods. The findings, published recently in Cell Press, suggest eating for pleasure is an ancient behavior and that fly larvae can be used in studying neurobiology and the evolution of olfactory reward-driven impulses.

To test reward-driven behaviors in flies, Shen introduced appetizing odors to groups of well-fed larvae. In every case, the fed larvae consumed about 30 percent more food when surrounded by the attractive odors.

But when the insects were offered a substandard meal, they refused to eat it.

Shen’s team also tried to further define this phenomenon-the connection between excitement and expectation. He found when the larvae were presented with a brief odor, the amount of time they were willing to act on the impulse was about 15 minutes.

“After 15 minutes, they revert back to normal,” he said. “You get excited, but you can’t stay excited forever, so there is a mechanism to shut it down.”

Shen’s work also suggests the neuropeptides, or brain chemicals acting as signaling molecules triggering impulsive eating, are consistent between flies and humans. Neurons receive and convert stimuli into thoughts that then are relayed to the downstream mechanism telling the animals to act. These signaling molecules are required for this impulse, suggesting the molecular details of these functions are evolutionarily tied between flies and humans.

“There are hyper-rewarding cues that humans and flies have evolved to perceive, and they connect this perception with behavior performance,” Shen said. “As long as this is activated, the animal will eat food.”

In the fly model, four neurons are responsible for relaying signals from the olfactory center to the brain to stimulate action. Each odor and receptor translates the response slightly differently. Human triggers are obviously more diverse, but Shen thinks the mechanism to appreciate the combination is likely the same. He is now working with Tianming Liu, an assistant professor of computer science at UGA and member of the Bioimaging Research Center and Institute of Bioinformatics, on a computer model to determine how these odors are interpreted as stimuli.

“Dieting is difficult, especially in the environment of these beautiful foods,” Shen said. “It is very hard to control this impulsive urge. So, if we understand how this compulsive eating behavior comes about, we maybe can devise a way, at least for the behavioral aspect, to prevent it. We can modulate our behaviors better or use chemical interventions to calm down these cues.”