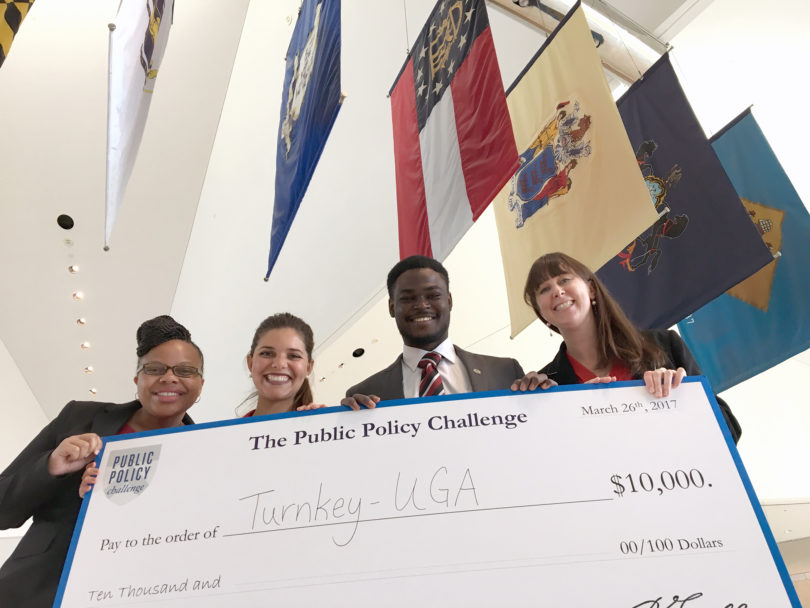 App rewards teens for not using phone while driving

Athens, Ga. – A new app wants to reward teens for not using the phone while driving.

The TurnKey app uses behavioral economics such as positive reinforcements to encourage students to drive safer. For each minute a student does not interact with their phone while driving, they earn points that eventually earn them prizes. Higher performing students will have their names entered into a drawing each semester for the chance to win a larger grand prize. In addition, students who team up to participate in the app’s group competitions can claim awards that include bonus points or a group pizza party.

“The Fels Policy Challenge is transformative for students-they have the opportunity to build something innovative that has potential for real, sustainable change in their communities,” said Bagwell Adams. “It is inspiring to watch these ideas come to fruition.”

“TurnKey has implications for public safety and public health,” said Bagwell Adams. “The application of behavioral science and technology to alter individual behavior in this context could save lives in Athens and other communities.”

In collaboration with an app developer and the Athens-Clarke County School District, the TurnKey team will launch the pilot phase of the app at one Athens-area high school in fall 2017 and eventually span out to others.

“Our plan is to get TurnKey in the hands of all 3,200 high school students in Athens within three years,” said Bradford. “Even if the TurnKey program doesn’t prevent any fatal accidents, we conservatively expect it to reduce the rate of accidents in Clarke County by 10 percent.”

Once the app is launched more widely, the team believes this will result in 500 fewer accidents per year, with an average savings of $6,000 per accident. These savings would benefit the youth and their families, the broader community of drivers and pedestrians, and ultimately serve to bring down costs, including those for auto insurance, in the area.

“We strongly believe that UGA can lead the nation in addressing teen texting while driving by developing TurnKey in collaboration with the Athens-Clarke County school system,” said Bradford.

“I am very thankful for the opportunity to represent the University of Georgia at the Fels National Policy Challenge,” said Tobi Olagunju, an MPH student in the College of Public Health. “The experience was incredible, a learning curve, demanding, and completely worth it. We worked hard to identify a serious problem and worked harder to develop an acceptable solution. We forged the necessary partnerships, garnered important support from the community, did our research, and generated excitement about our innovation. We hope that we begin to see a reduction in distracted driving as we roll out TurnKey, and ultimately less accidents, injuries and fatalities. We want to normalize non-cellphone use behind the wheel.”

More information on SPIA and the College of Public Health is available at http://spia.uga.edu and http://publichealth.uga.edu.