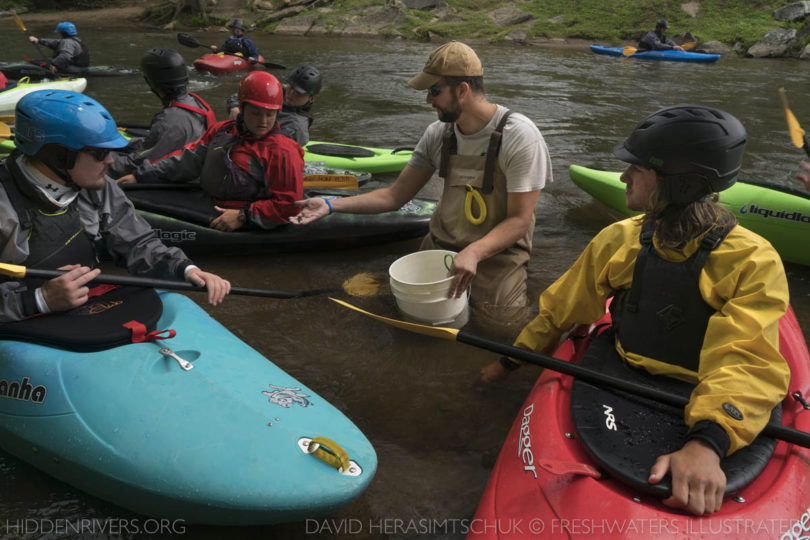 The rivers and streams of the southern Appalachian region are some of the most biologically diverse in North America. Athens filmgoers will have the chance to see the richness and beauty of these waterways at a public screening of the documentary Hidden Rivers on April 17.

The event, which includes a question-and-answer session with the filmmaker and a reception catered by The National, takes place at Cine, 234 West Hancock Ave. It is being held in conjunction with the biennial Georgia Water Resources Conference.

Hidden Rivers explores the waterways of the Southern Appalachians, following the work of conservation biologists and explorers throughout the region, revealing the beauty and vulnerability of this aquatic world and how people are finding ways to protect it.

The film was produced and directed by Jeremy Monroe of Freshwaters Illustrated, a nonprofit organization dedicated to raising awareness about aquatic ecosystems through photography, video and film.

“We worked for nearly 10 years to make an immersive film that would give audiences a deep dive into the river ecosystems of Southern Appalachia, along with a glimpse of the species and habitat conservation work that is happening throughout the region,” said Monroe. “Our hope is that this film will inspire more conversations about river and water conservation in the Southeast, and that river conservation groups will use the film as a way to enlighten and broaden their own communities.”

The program will begin in the Cine Lab at 6:30 p.m. with a reception and gallery viewing of Freshwaters Illustrated photographs. Hidden Rivers will be shown at 7:30 p.m., followed by a Q&A session featuring Monroe, southeastern aquatic conservation professionals and local interdisciplinary arts researchers. Confirmed panelists include Bernard Kuhajda, science program manager for the Tennessee Aquarium Conservation Institute; Bud Freeman, director of the Georgia Museum of Natural History; Alex Lamle, aquatic biologist with The Nature Conservancy; and Abigail West, a student in the Lamar Dodd School of Art and intern with the UGA Office of
Sustainability.

Tickets are $5 per person and are available at the Cine box office or online at http://athenscine.com/movie/hidden-rivers.