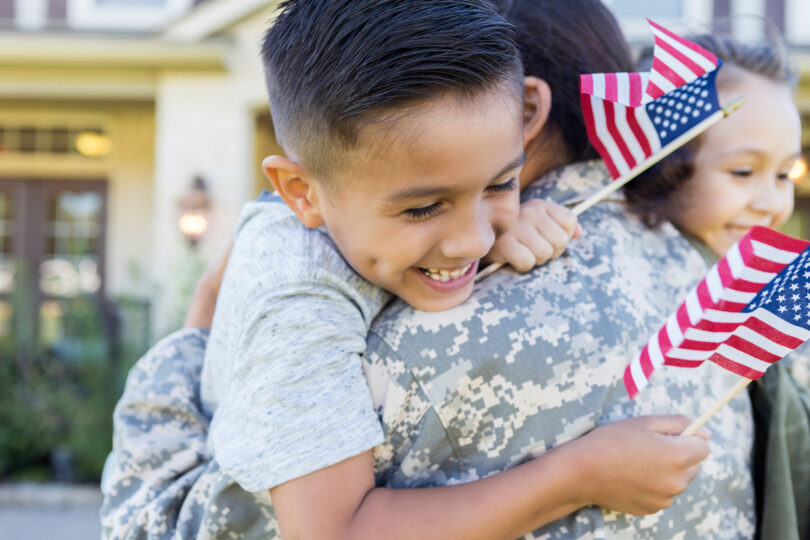 For service members, it might help to not go back to pre-deployment times

But what happens when the cameras stop rolling and military personnel are thrust back into their everyday lives? New research from the University of Georgia suggests the stress caused by this reintegration can be challenging for not only the service member but their children as well, particularly their mental health. But aiming for a new normal, instead of trying to get back to how the family operated pre-deployment, can help families and their service members more easily navigate hurdles they may encounter.

Parents in this situation should prepare for a slightly rocky period while everyone is getting used to living together again. One key takeaway from the study for parents is to avoid arguing in front of their children, said lead author Catherine Walker O’Neal.

“There’s this assumption that everything’s just going to fall into place, and they’re going to go back to normal and it’s going to be like the deployment never happened,” said O’Neal, an associate research scientist in UGA’s College of Family and Consumer Sciences. “They often think they’re going to pick up right where they left off. Research shows that’s not the case.”

I think it’s important for military families to know that you’re not just going to pop home tomorrow, and everything is going to be perfect and as if deployment didn’t happen. It’s going to take some time.” — Catherine Walker O’Neal, College of Family and Consumer Sciences

The study relied on data from 238 military families, in which one parent served and the other was a civilian. Partners were asked about any tension stemming from reintegration and whether they were experiencing difficulties in adjusting. The researchers found that conflict between parents was a driving factor in adolescents’ mental health, with children in high-conflict families reporting not only more depressive symptoms and anxiety but also less self-efficacy and personal well-being. Adolescents reported seeing more interparental conflict in families where the active duty parent was having a harder time reintegrating into family life.

“Reintegration is a process, and it takes time,” O’Neal said. “You have this service member who’s coming back from very different circumstances, with their unit and the stress that can happen there. The family had to develop a new normal—‘This is how we carried out the roles you used to do while you were gone.’ It can be quite stressful.”

Previous research has focused most often on military deployment and how difficult it can be for the family members left behind. But less focus is given to how families reacclimate to having their service member around when deployment ends.

“I think it’s important for military families to know that you’re not just going to pop home tomorrow, and everything is going to be perfect and as if deployment didn’t happen,” O’Neal said. “It’s going to take some time.”

Families reacclimating following their service member’s deployment need to focus on creating a new normal, not trying to go back to how things were pre-deployment, she said. Families have to learn to compromise and listen to each member’s needs. Adolescents, in particular, are facing a variety of stressors like physical changes from puberty and ongoing mental development, not to mention new family patterns and routines after having a parent away for an extended period. But it’s important for families to realize this adjustment period is normal.

Inevitably, there will be conflict in any relationship, but the goal should be to disagree in a way that conveys respect and recognizes what is developmentally appropriate for their children to observe. Conflict shouldn’t lead the children to believe the family unit is at risk. That could be as simple as saying, “I hear you. I understand you. I have a different perspective,” O’Neal said.

The study was published in the Journal of Marriage and Family. Jay Mancini, from the Virginia Polytechnic Institute and the University of Georgia, co-authored the paper. Both O’Neal and Mancini are based in the university’s Department of Human Development and Family Science.