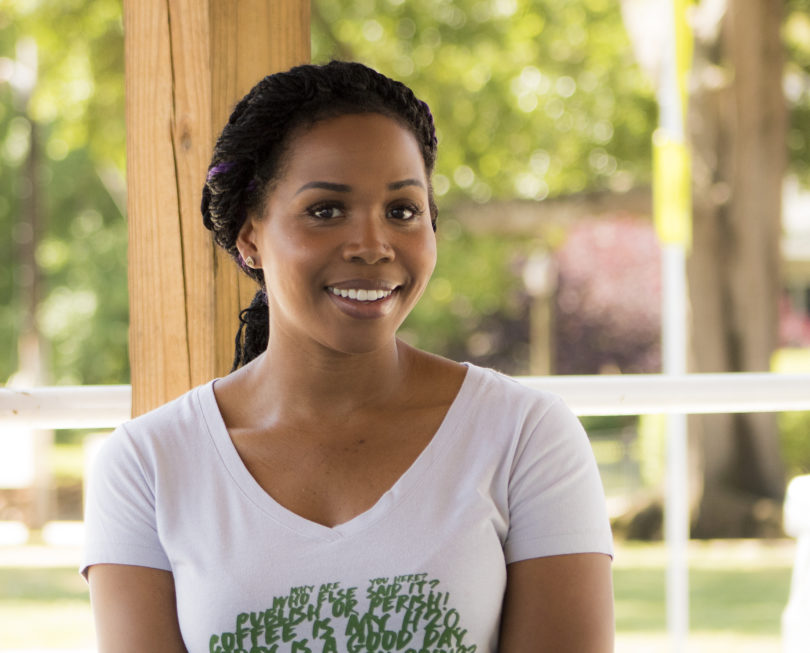 First African American to graduate from doctoral program looks to train next generation of researchers, clinicians

Working as a traveling speech-language pathologist, Davetrina Seles Gadson was not thinking about going back to school to get her doctorate. She was living in different parts of the country, making good money and loving her job.

But she kept feeling a small itch that something was missing.

It wasn’t her career that she questioned—she enjoyed what she was doing. But as she worked with her patients, she began to think about how speech-language pathologists consider patients’ quality of life as they progress through rehabilitation, and she realized there was little to no research specifically focused on the African American population.

Over time, she realized, something had to be done.

First it took her to National Rehabilitation Hospital in Mitchellville, Maryland, where she served as the lead speech pathologist for outpatient neurology services. Gadson was specifically interested in patients with aphasia, a speech and language difficulty that stems from a stroke in the left side of the brain, and this position allowed her to gain more insight into her patients.

But still, she realized, the research was still lacking. “I wasn’t seeing a lot of African American research targeted toward people with aphasia. I wasn’t sure if what we were doing in the field was really benefitting our patients,” she said. “So, my mentor said, ‘Stop complaining and get your Ph.D. because nobody is going to listen to you.’ And I said, ‘OK, well fine then, I’ll go do that.’”

It’s been six years since making that decision, but this weekend, Gadson can finally bask in the glow of graduating from the University of Georgia. Her degree also marks a milestone for the UGA College of Education’s department of communication sciences and special education, as Gadson is the first African American doctoral graduate of the communication sciences and disorders program.

Her next step is a neuroscience postdoctorate position at Georgetown University, where she will be working with Peter Turkeltaub in the Center for Brain Plasticity and Recovery. The opportunity will allow her to gain more experience in neuroimaging and, specifically, allow her to examine the relationship between spared brain regions of the brain following a stroke and language recovery among minority populations.

The experience complements an internship Gadson did earlier in her doctoral program through the National Institutes of Health, where she worked in the institutes’ stroke lab.

Along with graduating with top internship and postdoctorate placements, Gadson also has the research to back it up. While at UGA, she conducted a first-of-its-kind study investigating the health-related quality of life among African American stroke survivors. Previous studies have looked at quality-of-life issues, but not specifically among African Americans with aphasia.

Overall, she found, African Americans with aphasia report a similar lower health-related quality of life as other races or ethnicities—for example, they may be less social or have difficulty navigating the world compared to their pre-stroke life. This was consistent with other research. “But one of the things I did that the research hadn’t looked at yet in African-Americans is the impact of aphasia on social support and social network. I wanted to know if individuals have a bigger social network or social support, what does that look like?”

Gadson found that individuals with aphasia feel supported and have a good social network just like stroke survivors without aphasia and healthy adults with no neurological injury. This is a good starting point for future research into how treatment can progress, and how speech-language pathologists can help those with aphasia increase their health-related quality of life.

“One of the things I’ve realized, now that we know the social support piece is huge whether you have a brain injury or not, is how we as speech-language practitioners can structure our therapy to target communication within these social contexts,” she said. “I think communication needs to be structured within those contexts in order to support them getting out and living a better quality of life.”

It’s these unanswered questions that keep Gadson pushing further in her field. She was initially drawn to speech-language pathology as a high school student because she knew she wanted a career involving speaking—it was either that or broadcast journalism, she said. But speech-language pathology offered great job prospects and a variety of specialties within the field—two positives that kept her career moving forward.

Now, she’s hoping to make a difference at a research and training level, to continue the work she’s started among minority populations with aphasia and bring a more diverse group of undergraduates in to further advance the field.

“When it comes to speech pathology, the limit in diversity is across the board, and the field knows it,” she said. Even at UGA, the number of minority undergraduates who are accepted into the speech-language pathology program is still in the single digits, percentage-wise. But the numbers are going up.

Gadson was initially attracted to UGA’s graduate program because of some innovative research being done by faculty to support language recovery, such as using meditation. But the university’s high ranking for conferring doctoral degrees among students of color also helped make her decision.

Now, it’s back to the Washington, D.C., area—a familiar setting for Gadson—and pushing for more connections between neurological impairments and speech loss and recovery.

“It’s come full circle,” said Gadson, who, in addition to working at Georgetown, will also be spending some time at National Rehabilitation Hospital, where she was working before she began the doctoral program. “I’ll get neuroimaging experience, which is something I really desire, to be able to look at that brain image and see where the damage is.”