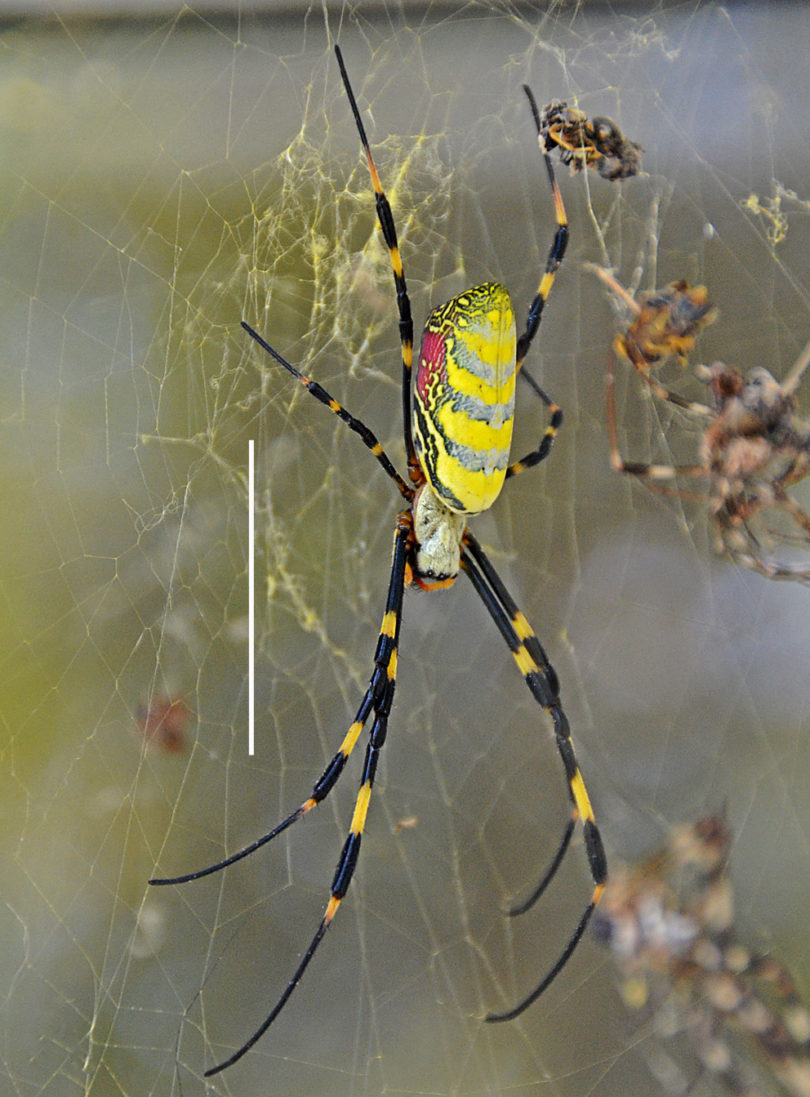 Editor’s note: An updated story about the Joro spider has been posted.

Athens, Ga. – When Wesley Huffmaster spotted a big, brightly colored and boldly patterned spider near his home in Colbert last fall, he knew it was unusual. Analysis of its physical characteristics and DNA by scientists at the Georgia Museum of Natural History at the University of Georgia have proven him right, confirming the first known occurrence in North America of Nephila clavata, the East Asian Joro spider. Their findings appear in the online open access journal PeerJ.

The Joro spider belongs to a group of large spiders known as golden orb-web weavers that make enormous, multi-layered webs of gold-colored silk. Species in this group are found throughout the tropical and subtropical regions of the world, including one—the banana spider—that is native to the southeastern U.S.

The Joro spider, widespread in its native Japan, Korea, China and Taiwan, is similar in size to the banana spider but its coloring—black legs with yellow-orange stripes and a bright yellow body with bluish-green stripes on its back and red markings on its underside—is distinctive.

Huffmaster realized that the spider he found was neither a banana spider nor the unrelated but similar-looking black and yellow garden spider. Besides its markings, its web was much farther off the ground and golden in color, not clear. He brought it to the attention of UGA entomologist E. Richard Hoebeke at the Georgia Museum of Natural History.

“It kind of knocked my socks off when I saw it,” Hoebeke said. “It didn’t look like anything we’ve seen among the native spider fauna.”

Based on its markings, size and other physical features, he identified it as the Joro spider, Nephila clavata.

Hoping to learn if more of the spiders were making a home in the area, he and museum director Byron J. Freeman alerted environmental journalist Lee Shearer of the Athens Banner-Herald. Shearer wrote an article about the spider sighting, prompting calls from people in Barrow, Jackson and Madison counties in northeast Georgia. Hoebeke and Freeman visited each of them, photographing and collecting specimens from nine locations.

Freeman, a faculty member in the UGA Odum School of Ecology, analyzed the DNA from two of the spiders and compared it to that of Joro spiders available from GenBank, a database containing all publicly available DNA sequences. He confirmed that the Georgia spiders were indeed Joro spiders and that they were closely related to individuals from China and Japan.

“This really illustrates the importance of the museum and its systematic collections, which allows us to conduct quick genomic analysis,” Freeman said.

Although the Joro spider has never before been reported in North America, plenty of other spiders and insects from Asia and other parts of the world have.

“There are over 2,500 non-native insects and about 60 species of non-native spiders in the U.S. that we know about,” Hoebeke said. “So many of these things go unnoticed for years, because most insects and related arthropods are pretty small and drab.”

Some of them, like the hemlock woolly adelgid that has decimated hemlock trees in the eastern U.S. since its first sighting in 1951, are invasive pests that cause serious damage to the environment and cost the U.S. economy more than $120 billion per year, according to the U.S. Fish and Wildlife Service. Fortunately, the Joro spider does not appear to be a pest.

“There’s no indication that it will be invasive to the extent that it would be disruptive or economically costly,” Hoebeke said. “But that’s one of the reasons we intend to study this spider a little bit further. What’s the extent of its distribution in the South and beyond? How does it interact with native spiders—might it actually displace some of them, like the big garden spiders? Those are some of the questions we want to explore.”

Hoebeke and Freeman suspect the Joro spider arrived accidentally as a hitchhiker either in shipping containers or among shipped packing materials such as pallets and crates or even on live plant material. Most of the reported sightings took place in the vicinity of Braselton and Hoschton near warehouse and distribution facilities along the Interstate 85 corridor. The rest were found in Madison County, about 30 miles due east—and downwind—of Braselton and Hoschton. Golden orb-web weavers, as a group, are known to be particularly successful at dispersing aerially as spiderlings; Hoebeke and Freeman think that may have happened in this case and that there could be multiple as-yet undocumented populations in between.

They also believe it’s likely that the Joro spider has established itself in other locations besides north Georgia.

“It could be all over the country, including up north,” said Freeman. “It can withstand pretty cold weather.”

Freeman and Hoebeke said that the spiders reach maturity starting in early September and will die off by late November. They asked anyone who spots a suspected Joro spider to contact Hoebeke at rhoebeke@uga.edu. A photograph can be used to confirm a sighting.

For more information about the Georgia Museum of Natural History, see http://naturalhistory.uga.edu.

For an update on the Joro Spider in Georgia, check out this story.