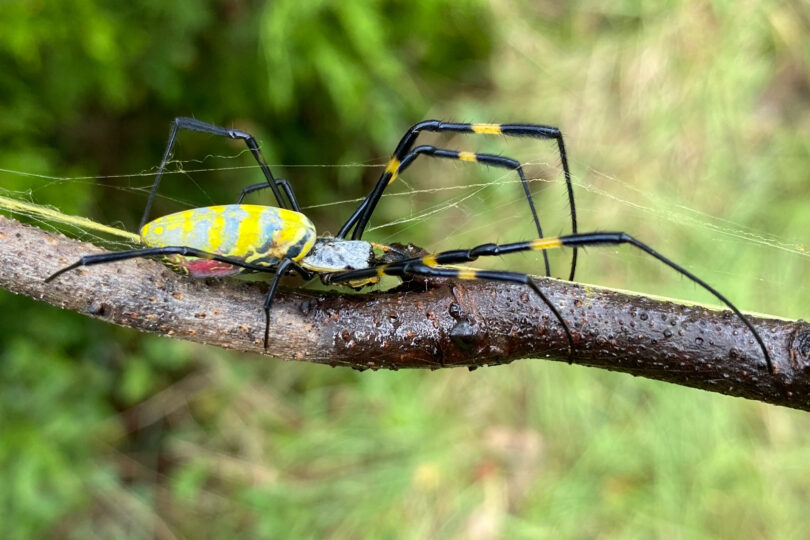 A female Joro spider crawls across a branch. (Submitted photo)

If you live in Georgia, it’s hard not to notice the state’s latest resident.

The bright yellow, blue-black and red spiders’ golden webs will be all over power lines, in trees around town and even on your front porch come summer.

The Joro spider first arrived stateside around 2013 and has since spread across the state and Southeast. But new research from the University of Georgia suggests the invasive arachnids could spread through most of the Eastern Seaboard of the U.S.

There’s really nothing we can do to stop them. But that’s not necessarily bad news. 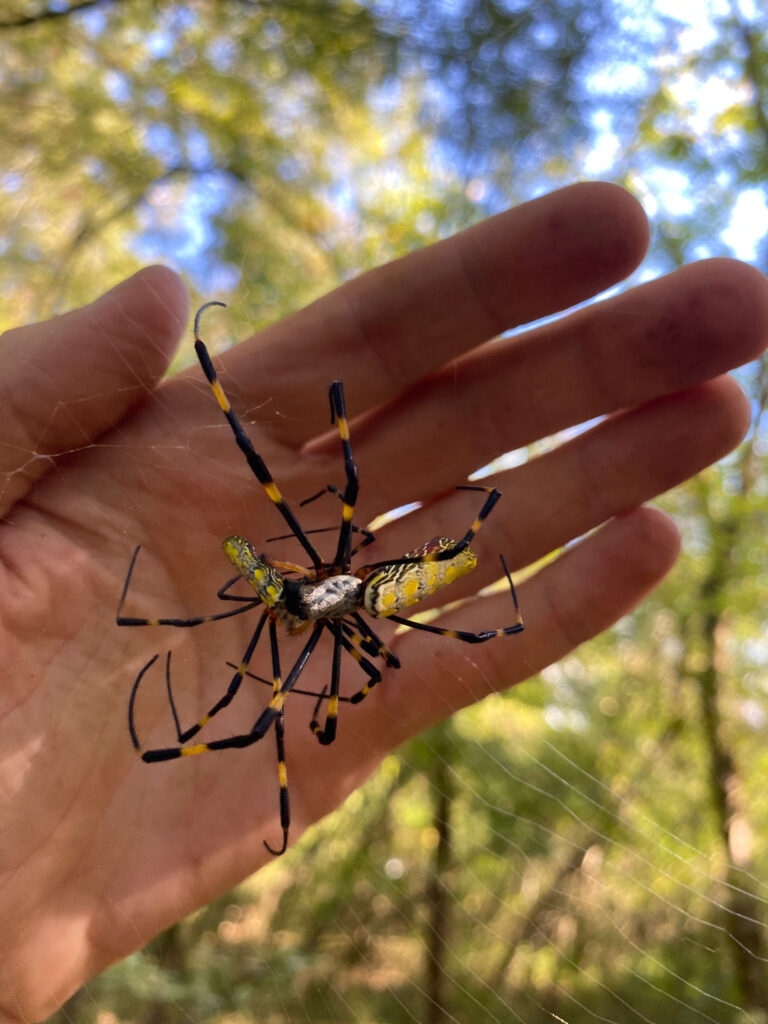 A caterpillar finds itself caught in a Joro spider’s web. (Submitted photo)

Joros don’t appear to have much of an effect on local food webs or ecosystems, said Andy Davis, corresponding author of the study and a research scientist in the Odum School of Ecology. They may even serve as an additional food source for native predators like birds.

“People should try to learn to live with them,” he said. “If they’re literally in your way, I can see taking a web down and moving them to the side, but they’re just going to be back next year.”

“The way I see it, there’s no point in excess cruelty where it’s not needed,” added Benjamin Frick, co-author of the study and an undergraduate researcher in the School of Ecology. “You have people with saltwater guns shooting them out of the trees and things like that, and that’s really just unnecessary.”

It looks like the Joros could probably survive throughout most of the Eastern Seaboard here, which is pretty sobering.” —Andy Davis, Odum School of Ecology

The researchers used records from iNaturalist to track sightings of the spiders across Georgia throughout the year. iNaturalist is a joint venture from the National Geographic Society and California Academy of Sciences that plots user reports of animals to create location data on a variety of species. They also performed tests to compare the species’ cold tolerance, including measuring the arachnids’ metabolic, heart and survival rates during a brief freeze.

The study found that despite their similarities, the Joro spider has about double the metabolism of its relative, has a 77% higher heart rate and can survive a brief freeze that kills off many of its cousins. These findings mean the Joro spider’s body functions better than its relative in a cold environment.

And that means the Joros can likely exist beyond the borders of the Southeast. 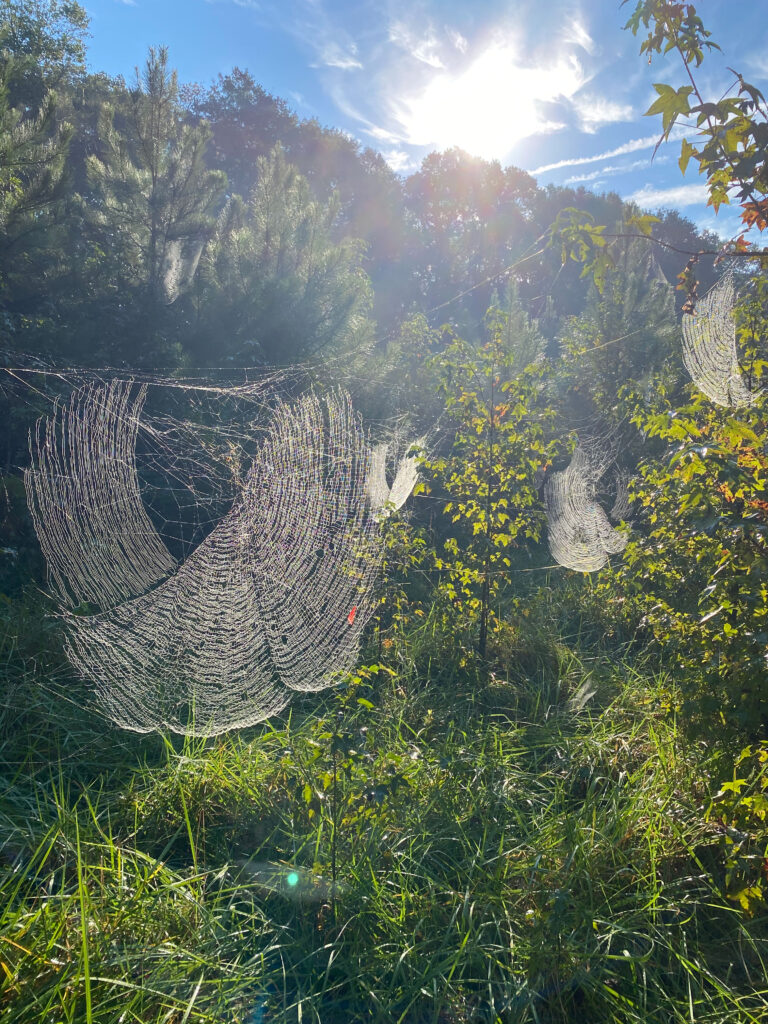 Sunlight streams through the elaborate webs made by Joro spiders. (Submitted photo)

It’s not just cold-hardiness that makes the Joro likely to spread beyond its current region.

In their native Japan, Joro spiders colonize most of the country. Japan has a very similar climate to the U.S. and is approximately the same latitude.

“Just by looking at that, it looks like the Joros could probably survive throughout most of the Eastern Seaboard here, which is pretty sobering,” Davis said.

Joros can also use their silks to carry them across the wind to new locations, a behavior called ballooning. It’s part of the reason why Joros were able to spread so rapidly across the state of Georgia. When hatchlings emerged in the spring, they’d ride along to someplace new. Their offspring did the same the next year.

Humans are at the root of their invasion. Don’t blame the Joro spider.” —Benjamin Frick, undergraduate researcher

But humans also factor into the equation.

“The potential for these spiders to be spread through people’s movements is very high,” Frick said. “Anecdotally, right before we published this study, we got a report from a grad student at UGA who had accidentally transported one of these to Oklahoma.”

The first Joros to arrive in the U.S. were likely stowaways on shipping containers. Now that they’re here, the chances of Joros hitching a ride to a new locale on a car or in luggage are high.

But that’s still no reason to panic. The spiders are relatively harmless to people and pets, making their presence more of a nuisance than dangerous. Joros won’t bite unless cornered, and their fangs are often not large enough to break human skin.

“There’s really no reason to go around actively squishing them,” Frick said. “Humans are at the root of their invasion. Don’t blame the Joro spider.”