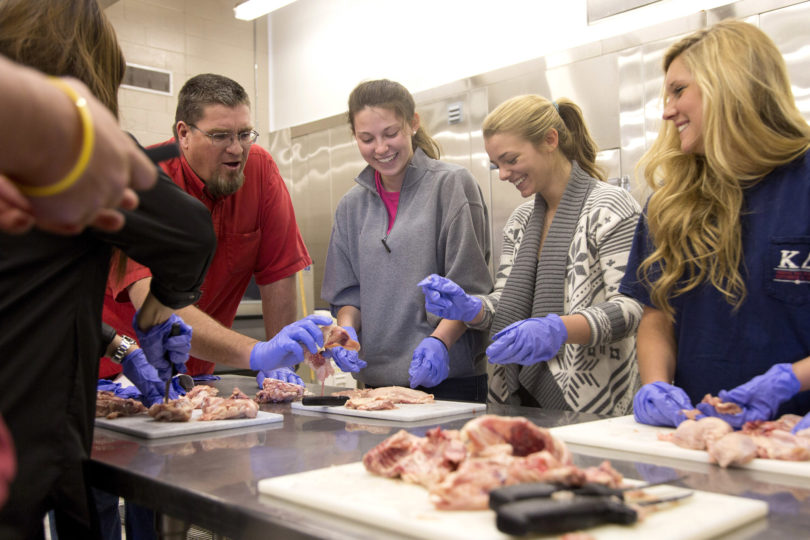 First-year students at UGA are getting to know the chicken they eat by learning everything from where it comes from and how it is processed down to what impacts its tenderness and how best to make it tasty.

Casey Ritz and Brian Kiepper, both professors and Extension poultry scientists in the College of Agricultural and Environmental Sciences, work together to teach “Chicken Que: Science Behind the Grill,” a UGA First-Year Odyssey seminar.

“One of my original objectives was to teach students some of the truths and myths about the poultry industry and chicken meat in general,” Ritz said.

The nine-week class meets weekly for two hours. The course is mostly a hands-on class with some lecturing involved. Ritz and Kiepper use UGA vans to bring students to the UGA Poultry Research Center off South Milledge Avenue. Students begin the semester learning the importance of grill safety and proper grilling techniques. However, the lecture topics change each week.

In one class, students learned where different spices come from and the difference between a seasoning, which brings out natural tastes, and a flavoring, which can change the taste of the meat entirely. To help emphasize this difference, Ritz gave the students 10 different spice blends to taste and had them note the predominant flavors in each along with which area of the world from where it came. This activity brought about a mix of pleasurable and disapproving facial expressions from the students.

In this same class, students learned about the different types and sizes of peppers. When it came time to sample the peppers, some students were cautious to try them after learning that a habanero pepper and a bell pepper can be the same color.

After sampling the peppers, students worked in groups to prepare white and dark meat chicken for grilling with herbs and Caribbean jerk seasoning. Ritz allowed students to determine how much of each flavor to use. Half of the flavored meat was baked while the other half was grilled by Kiepper. When the chicken was done, students sampled the meat and discussed the difference in taste and texture between the two cooking methods and which had more flavor.

Kathryn Craw described the class as one of a kind. She said she had no prior cooking experience but knows what she has learned in the class will help her in the kitchen.

Other lecture topics included chicken muscle chemistry and brines versus marinades. For a final project, students must create their own original recipe, which includes a surprise ingredient that Ritz provided to each student individually. The recipe has to be written in an official format that includes ingredients as well as instructions.

Students will prepare and grill the chicken themselves using their original recipes and one additional recipe of their choice before presenting the final product to a taste panel of judges. The judges will try 30 different combinations and vote on a winner who will be awarded a 2014 First-Year Odyssey Grill Master Trophy on April 24, the last day of class. Some of the surprise ingredients assigned are grape jelly, root beer, chili oil and Chinese five-spice mix.

“It’ll be interesting to see what they come up with,” Ritz said. “And our taste panel has eaten a lot of chicken so they know what’s good and what’s not.”

Ritz partly credits the class’s popularity and success to the team-teaching between himself and Kiepper. Ritz said he enjoys the student interaction and having everyone get to know one another.

“What better way to get to know somebody than to sit down and eat [with them],” he said.