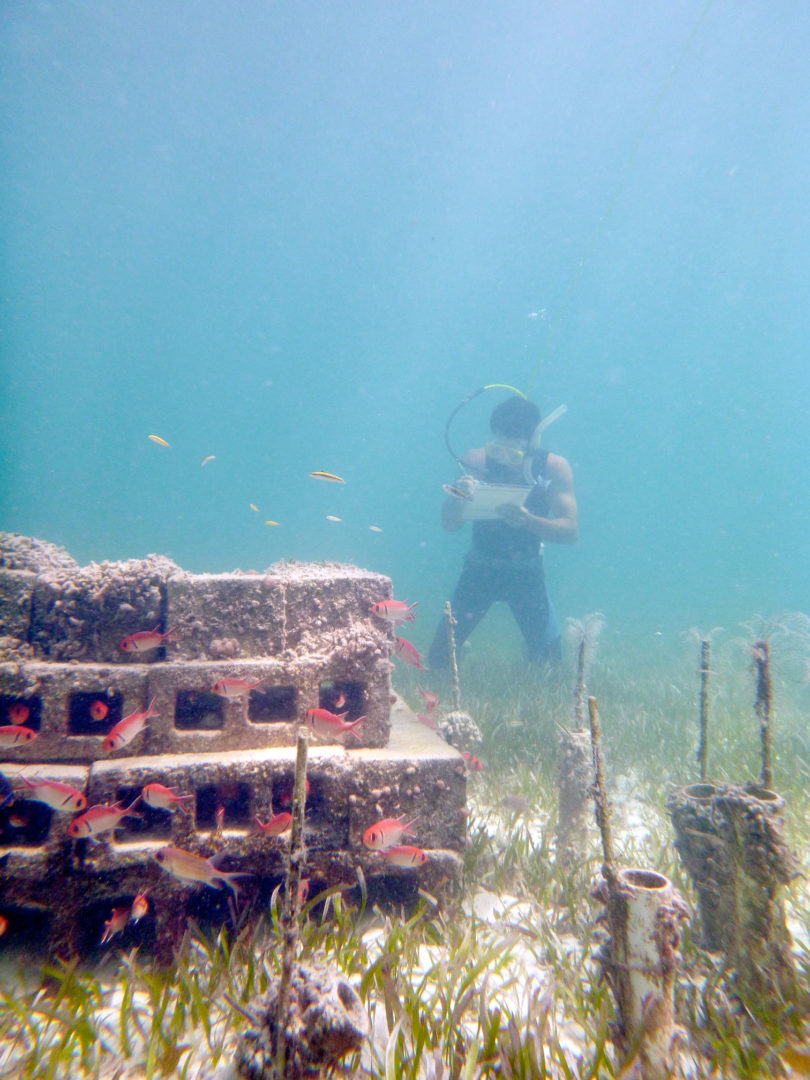 Jacob Allgeier studies a reef in the waters of Abaco Island

Athens, Ga. – Coral reefs are among the most productive—and imperiled—ecosystems in the world. One of the many threats they face is pollution from runoff and poorly treated wastewater, which upsets the delicate balance of nutrients they require.

Coral reefs occur in tropical and subtropical coastal waters that are naturally low in nitrogen and phosphorus. A certain amount of these nutrients is essential for coral growth, but too much can increase the likelihood of coral disease and death. Lead author Jacob Allgeier, who conducted his research while at UGA and received his doctorate from the Odum School of Ecology in 2013, has spent years studying coral reefs in the Caribbean. He suspected the fishes that gather on reefs had a role to play in regulating nutrient levels and set out to determine if—and how—they did so.

Allgeier, now a postdoctoral research associate at North Carolina State University, and his colleagues established study sites at healthy reefs in the Caribbean dominated by four different types of corals, as well as nearby mangrove forests and sea grass beds for the sake of comparison.

First, they surveyed the fish communities present at each site, documenting fish numbers, species and sizes at each location, finding more than 71,000 individual fishes from 158 species.

Allgeier used field measurements and modeling techniques to estimate how much nitrogen and phosphorus fishes from 144 of those 158 species were storing in their bodies and how much they were introducing to their environment through excretion. Their estimates accounted for more than 99 percent of the total body mass of fishes at all sites. They incorporated these data into mathematical models to determine how much nitrogen and phosphorus entire fish communities were storing and introducing at each site.

They found, first, that fish did indeed provide a substantial amount of nitrogen and phosphorus, at levels that were largely determined by the structure of the fish community. The fish communities that stored and supplied the most nutrients tended to have high levels of species diversity, but were often dominated by just a few species, especially large-bodied ones.

A key finding was that although the overall amounts of nutrients supplied by the fish communities differed substantially across sites, the ratio at which they occurred was typically very similar—approximately 20 parts nitrogen to one part phosphorus—at all four coral reefs, but, importantly, not at the mangrove or seagrass bed sites.

“Our results suggest that the consistent ratio at which fishes cycle nutrients on these reefs may provide important insight as to the demands for nutrients by coral,” Allgeier said.

He and his colleagues reviewed the coral literature and found that previous experimental studies have shown that corals thrive when nutrients occur at almost exactly the proportions provided by fish in the study, and tend to decline in health or die when nutrient proportions deviate from this range.

“The crux of the story is that changing the ratio of nitrogen to phosphorus may have negative consequences for coral reefs,” Allgeier said. “It’s important to incorporate fish nutrient dynamics into the conservation of these ecosystems. Fish are clearly playing an important role; we now just need to better understand exactly what this role is.”

The study’s coauthors were associate professor Amy Rosemond of the UGA Odum School, Craig A. Layman of Florida International University and Peter J. Mumby of the University of Queensland. The research was supported by the U.S. Environmental Protection Agency, the National Science Foundation, the Pew Charitable Trusts and the Australian Research Council.The paper is available online at http://onlinelibrary.wiley.com/doi/10.1111/gcb.12566/full.