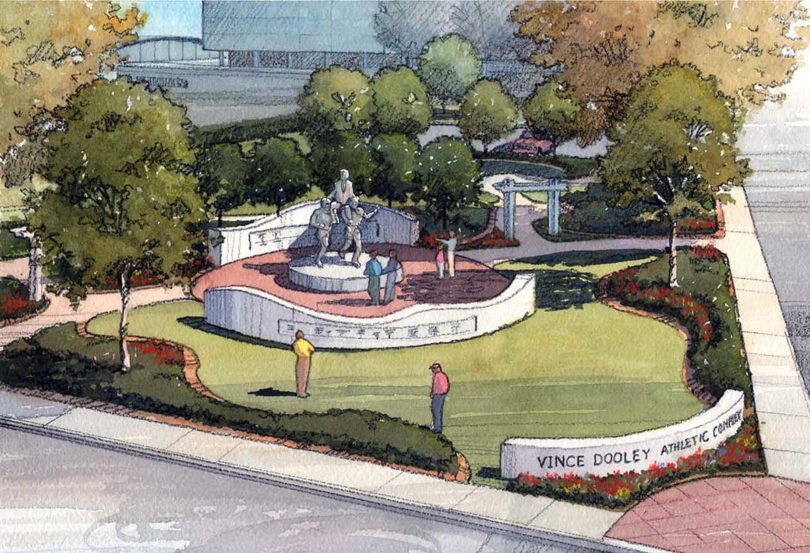 The university will name the sports complex on the southwestern end of campus for Vincent J. Dooley, football coach from 1963 to 1988 and athletic director from 1979 to 2004.

The Executive Board of the UGA Athletic Association approved the measure at a special meeting Feb. 11, as did the University Cabinet, which consists of the university’s top administrators. The proposal was approved by the University System of Georgia Board of Regents at its meeting  Feb. 13.

“This is a fitting tribute to Vince Dooley’s 40 years of service to the University of Georgia as an outstanding football coach and athletic director,” said UGA President Michael F. Adams. “The Bulldogs’ success under Vince’s leadership has been inspirational for our friends and fans, and the foundation he laid is an important component of the success we are enjoying today.”

A garden and sculpture commemorating Dooley will be constructed at the corner of Pinecrest and Lumpkin streets, adjacent to the Butts-Mehre Heritage Hall. A timetable for construction has not yet been set.

“We are honored to participate in this special tribute to Coach Dooley,” said Damon Evans, athletic director at UGA and a letterman under Dooley. “There are thousands who have benefited from Coach Dooley’s leadership of, and contributions to, our athletic program, myself included. However, he has had an enduring impact not only on the University of Georgia but also on college athletics across the country in a very significant way over a long period of time.”

Dooley’s football teams won six Southeastern Conference titles during his tenure, along with a national championship in 1980. The Bulldogs won a total of 17 national championships and 65 SEC crowns during Dooley’s time as athletic director, which also featured more than 100 Georgia student-athletes being named first-team Academic All-Americans.