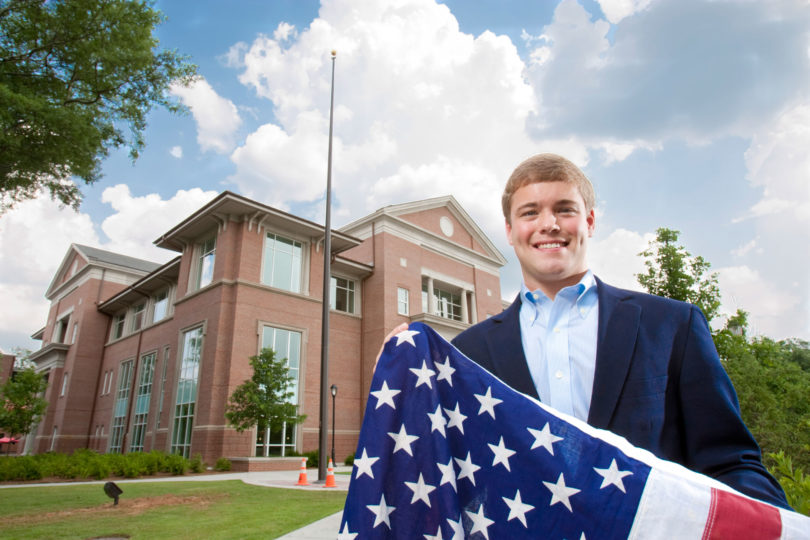 The stars and stripes are now flying over the Tate Student Center as the university has installed a ceremonial flagpole.

A dedication was held June 22 in the West Lawn of the Tate Student Center in a ceremony that included the Army and Air Force ROTC programs.

“We’re coming together today to dedicate a purposefully ceremonial place in the hopes that it will become a regular part of campus,” said UGA President Michael F. Adams at the event.

Wells Ellenberg, a rising junior from St. Simons, spoke at the event and helped to raise the flag at the ceremony. Last year, he proposed an official university flagpole after he realized the university didn’t have one. Elected to serve as a senator to the Student Government Association at the end of his freshman year, he decided that securing a university flagpole would be one of his goals to accomplish while in office.

“We’ve got plenty of places to meet and spend time with friends. But we’re a public institution, and I think it’s important we have a U.S. flag prominently displayed on campus. I come from a family with a lot of military history and background and think that we owe everything to the folks who have fought and continue to fight for our country,” he said.

Ellenberg wrote letters to UGA’s senior administration and the project caught their attention.

Tim Burgess, senior vice president for finance and ­administration, said “the notion that a state-sponsored public university have an official flagpole bears a lot of merit.”

Ellenberg was then directed to Rodney Bennett, vice president for student affairs. He met with Bennett a few times and Matt Winston, an assistant to the president, was brought in to help coordinate the project.

“Both of them were wholeheartedly supportive of the idea. It was something they had discussed before. They were really excited that the idea came back up,” Ellenberg said. “As with most SGA initiatives, you’re expecting some opposition, some constructive criticism. They said, ‘We agree 100 percent. This is something that needs to happen. It’s unfortunate that it hasn’t happened yet. And we’re going to do everything within our power to make sure it gets done, and it gets done right.’ ”

And while Ellenberg finished his SGA term in April, things were already in place for the flagpole. It was ordered-arrived within three weeks-and on May 23 was installed ahead of schedule.

Workers from the Physical Plant Division installed the new pole. First, they placed a sleeve in the grass for the pole. They also added a curved section of matching brick pavers. Lights were installed in June as the flagpole will be lit 24 hours a day.

The flagpole replaces one that previously stood behind the Tate Student Center, near the area where the public safety building was located, before that structure was taken out in 2005 to make way for the student center’s expansion.

“U.S. flag code suggests that there be a flagpole near the administration building of every public institution,” Ellenberg said, but rather than opt for a North Campus location, the flagpole went to central campus, where students spend more time.

“We felt like it would be more relevant for students across campus,” he said. “The idea is that if you’re meeting friends to grab lunch or study for a final, you say ‘Let’s meet at the flagpole.’ ”

Winston was part of the team deciding on the Tate Student Center location.

“We wanted to secure a prominent location on campus that would be symbolic of our community’s patriotism and where students could gather for events and activities,” he said.

Other flagpoles are scattered across campus at athletic complexes and the Butts-Mehre Athletic Heritage Hall, near the ROTC buildings near Military Science and Hardman Hall and at several Physical Plant buildings, but this 50-foot flagpole will serve as the ceremonial flagpole for the university.