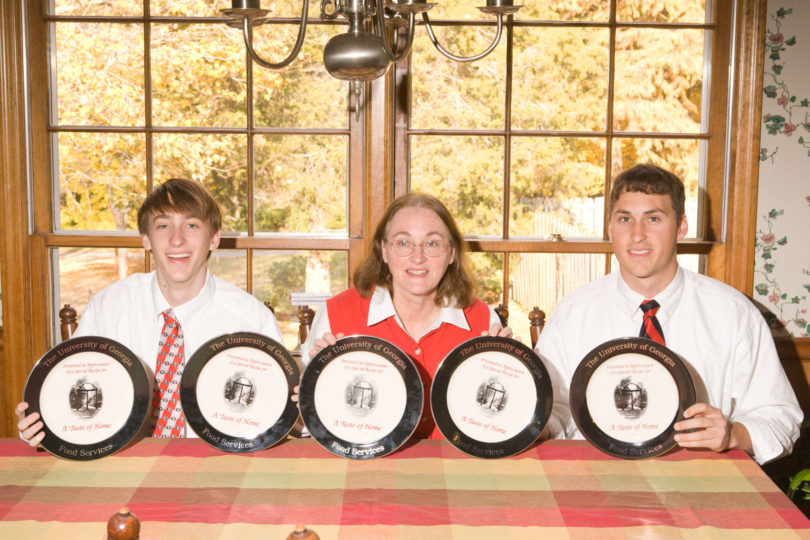 Laura Bennewitz (center) and her sons

From candied wings to shrimp potato salad, UGA’s Taste of Home event will feature a smorgasbord of students’ favorite recipes from home on Dec. 5.

In its 20th year the event, hosted by food services, will showcase 120 parent-submitted recipes spread across three meals at the four campus dining halls. Food choices include pumpkin pancakes for breakfast at Bolton Dining Commons, steak soup for lunch at Snelling Dining Commons, Asian glazed salmon for dinner at the Village Summit and root beer cookies for dessert at Oglethorpe Dining Commons. Meal ticket prices for the event, which is open to the university community, are $7.25 for breakfast, $9.05 for lunch and $12.60 for dinner.

A Taste of Home is a way to make students feel at home and to connect to university students and their parents, according to Michael Floyd, director of food services. “We see a lot of parents whose recipes we choose [at the event],” Floyd said. “We see grandparents, aunts and uncles, brother and sisters—the whole family. It’s a celebration.”

Families attend the event not only to sample a piece of their fudge truffle cake or whatever entrée, soup, salad, bread, side dish or other dessert they entered, but also to mingle with other families. For being chosen from among 1,000 submitted recipes, parents receive a commemorative 11-inch black-and-white plate and a copy of their recipe converted to serve 8,000 students, the approximate number of students the dining halls serve on a daily basis.

Laura Bennewitz, a 1973 and 1975 UGA alumna in journalism and parent of a current freshman and recent graduate,  is the contest’s first five-plate winner. In 2003, she tried her hand at the contest just to see if she could make a dish good enough to be selected.

After tweaking family recipes for rice salad, spinach rice, spicy rice and herbed rice, her walnut apricot rice will be the latest taste of home added to the dining hall’s special menu.

A Taste of Home began as “A Tribute to Mother’s Day.” Two decades and 12,000 submitted recipes later, the event has expanded in both the number and caliber of the entries, which vary from Dad’s recipe for Pop-Tarts for breakfast to poppy seed chicken that has become a staple in the dining halls. Another change is the event’s date to December after UGA moved to the semester system.

Bennewitz said the whole experience has been rewarding. “Being in the dining halls on the day your recipe is served is immensely satisfying,” she said. “It’s fun to eat with your son or daughter, meet their friends and not have to wash the dishes.”