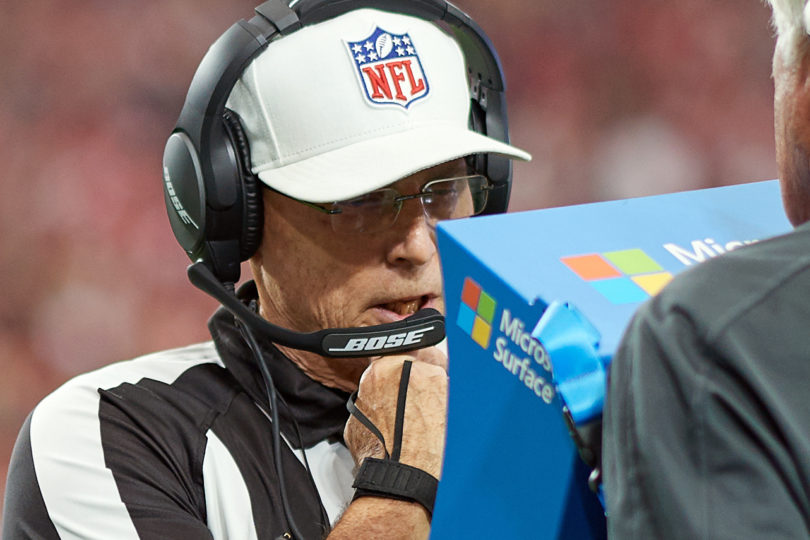 An NFL referee reviews a play on a portable instant replay monitor during an NFL game. (Photo by Robin Alam/Icon Sportswire via Getty Images)

The result of football instant replay video reviews can alter a consumer’s perception of a brand, according to a study conducted by researchers at the University of Georgia Grady College of Journalism and Mass Communication.

The upcoming Super Bowl, often referred to as the “Ad Bowl,” provides a variety of advertising opportunities, including when officials pause game action to analyze an instant replay video.

A pair of Grady College researchers have linked the outcomes of those football replay reviews to consumers having a positive perception of a brand.

Jihoon “Jay” Kim, a doctoral student at Grady College, and Jooyoung Kim, an associate professor of advertising, investigated how the use of advertising in sporting events’ replay review affected consumer feelings toward sponsored brands.

“I watched a tennis game one day and saw the replay system,” Jay Kim said. “While the video was reviewed live, I saw a brand logo on the screen and thought it was interesting because two groups of fans were watching it; the result of the replay video would make one group happy and the other group unhappy.”

To untap this psychological phenomenon, they researched the concept of “schadenfreude,” a German word for the experience of joy when observing another’s misfortune, or in this case, the joy fans have when a referee makes a call that helps their team and hurts the opponent.

“An advertisement used correctly can have a positive emotional transfer to a consumer,” Jooyoung Kim said. “A traditional view is that attitudes toward advertising leads to attitudes toward the brand, which then drives consumer behavior.”

Jay Kim and Jooyoung Kim developed an online experiment where nearly 400 students watched brand-sponsored instant replay videos in college football games. Participants were then asked a series of questions based on the result of the replay review.

Results showed increased focus and attention from spectators during rivalry games and during suspenseful moments. Also, spectators felt a greater amount of positive emotion when a referee’s decision through an instant replay video benefited their team late in a game with a close score compared to a less suspense-filled moment.

Jooyoung Kim said the results of this study could lead to a series of exciting advancements for advertisers of sporting events.

“Advertisers want to be present at the place where their audiences are happy rather than mad. They want to be associated with the positive memory,” Jooyoung Kim said.

According to Jooyoung Kim, in the past it was not possible to understand an audience down to the individual level. Individual targeting is becoming possible because of the technological advances. Programming systems will be able to use algorithms to choose whether to show a certain brand logo to a specific fan watching the game. The typical broadcast delay of approximately seven seconds for live-streaming sporting events will enable marketers to tailor the brand logo to match the happy fan.

“In an international competition such as FIFA World Cup or the Wimbledon Championships, sponsoring brands could use geographical information to decide whether their ads should be used with an IRV based on whether the outcome benefits a particular team or player. This would need a lot of coordination among the sponsors, media, and the sporting event hosts,” Jay Kim added.

Future research will focus on schadenfreude’s inverse concept, gluckschmerz, or feeling unhappy about the good fortune of others.

“Both concepts show how morally weak humans can be in social settings: we like when our opponent fails and don’t like when the opponent succeeds. But that’s the reality of being human, and the marketers can seize this untapped opportunity for their brands,” Jooyoung Kim said.