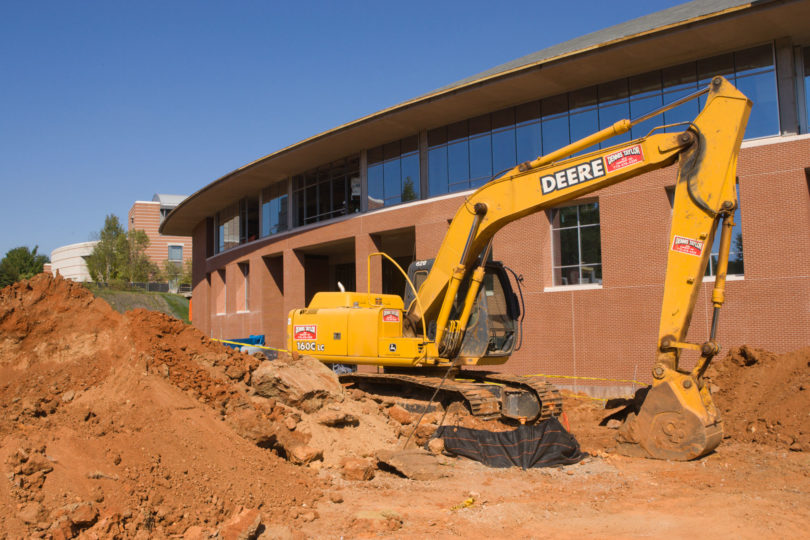 Construction on the new Lamar Dodd School of Art continues. Once completed next fall

A red-gold shower of welder’s sparks crackles and hisses. There’s a persistent groan and squeak from heavy equipment, and down one hall an electric power hammer slams nails with a percussive wham.

Welcome to the new Lamar Dodd School of Art, which has leapt from a parking lot on East Campus into being, after less than a year of day and night construction. It has a long way to go yet—mounds of red clay and swales of sticky mud surround the site, and a visitor can only imagine the final look.

When students and faculty move in a year from now, however, the $40 million structure will be the crowning touch of an area where art and music will thrive.

“It’s phenomenal,” said Georgia Strange, director of the art school, as she pauses, hard hat firmly in place, outside a studio-to-be in the busy work site. “It’s very rare for a university to commit these kinds of resources to art and very heartening. It’s a perfect example why people in arts or who support and appreciate the arts choose to live and work in Athens, Georgia, and not in New York, Los Angeles or Chicago.”

Linda Henneman, UGA project manager from the Office of University Architects, leads a small tour group, describing with pride how now-empty spaces will be turned into auditoriums, classrooms, studios and offices. Indeed, the 208,000-square-foot building will dramatically change East Campus and give students in the busy art school some of the best facilities in the country.

The new structure was conceived as two buildings joined by a transparent two-story lobby atrium bisected by the building’s central stair. Some 172,000 square feet will be used for teaching and artwork, with the rest housing an elaborate heating/cooling and ventilation system. In addition to studio classrooms, graduate studios and faculty studio/offices, there is space in the new building for 10 of the 14 areas of concentration in the art school, as well as administrative offices.

These include fabric design, printmaking, photography, graphic design, drawing and painting, scientific illustration, art education, digital media, studio foundations and art history. There will be two general-purpose lecture auditoriums with 100 and 200 seats, respectively, and both will have the latest audiovisual classroom technology. Three other general-purpose classrooms are included, two for 32 students and one for 70 students.

Ceramics, sculpture, interior design and jewelry and metalwork will remain in other venues on campus.

An open courtyard space between the two wings of the building shows one interesting feature: the wings aren’t quite parallel.

“The constraints of the site, with the Hugh Hodgson School of Music to the north and a stream to the south, dictated a nonparallel building plan that tapers to the east, creating a trapezoidal courtyard just beyond and visible through the lobby,” said Henneman.

Sustainable features also grace the new structure and include exterior solar shading to reduce heat gain and interior light shelves to optimize natural light by reflecting sunlight onto ceilings. Because of the sophisticated exhaust ventilation system necessary for art studios, energy recovery units, which conserve energy in conditioning air, also have been included. The surrounding site includes a storm-water infiltration system, and additionally there will be a “green” roof over the large lecture hall.

A new parking deck is also under consideration for an area not far away, according to Henneman, though a final decision on it has not been made yet.

Above all, what visitors see inside the rising structure is light. The building’s huge window spaces will allow natural light to flood studios, offering artists what they have for centuries considered a necessity.

While the new building will replace the LDSOA’s aging North Campus quarters, the school itself has been burgeoning for decades and is one of the largest units in the Franklin College of Arts and Sciences. The current home of the art school was built in 1963 to accommodate 350 art majors. It continues to attract top students in all areas of art from Georgia and around the country, as it has for many years.

Founded in 1930, the school was led for many years by Lamar Dodd, a renowned artist whose name the school now bears. With more than 1,000 undergraduate majors, the art school has grown with its reputation. In addition to its on-campus facilities, the school also has a year-round study-abroad program in Cortona, Italy, that has served more than 4,000 students from 400 American institutions since its inception in 1969. More recently the school has expanded the international opportunities for study in art to include programs in Japan, Cuba and Ghana.

Meanwhile, construction continues apace at the new site, and next fall, the first generation of UGA art students will arrive to a dream fulfilled.