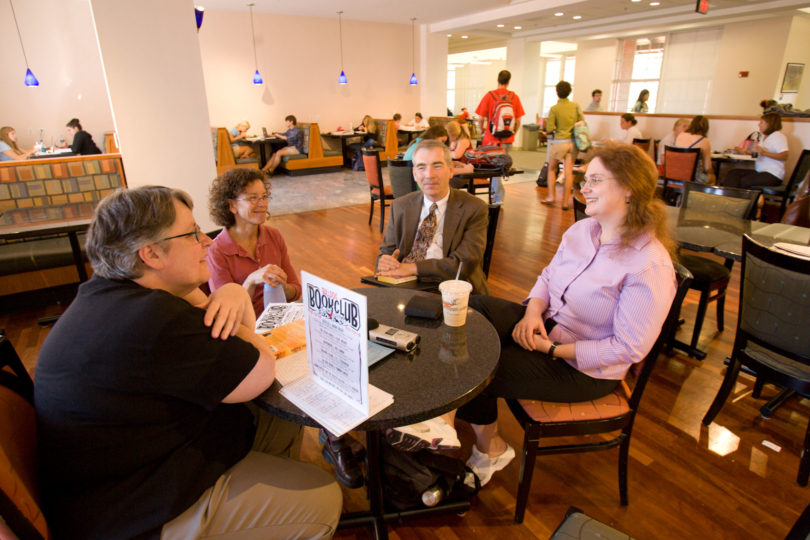 Throughout a teaching career that has spanned more than three decades, Fran Teague has believed that when students read and write, they learn more deeply than when they simply listen and memorize.

She has been a strong advocate for more opportunities for students to read and write-regardless of their academic discipline-on the many committees and task forces on which she has served through the years, in particular the Task Force on General Education and Student Learning and the subsequent Task Force on Writing, which she co-chaired.

“Dr. Teague has played a major role in shaping the future of undergraduate education at UGA for many years,” said Provost Jere Morehead. “She is a wonderful colleague and a respected and articulate advocate for a rigorous and challenging undergraduate curriculum.”

But Teague’s commitment goes beyond advocacy. Five years ago-at her own initiative and on her own time-she started the Bulldog Book Club, which extends an open invitation to students to gather weekly in the Miller Learning Center to discuss with her and each other books of their choosing, which this semester range from A Thousand Splendid Suns to The Girl with the Dragon Tattoo.

“Students need to have a reminder that reading is a habit that can give them great pleasure for the rest of their lives,” she said. “My reward is meeting others who love to read.”

In recognition of her ongoing service to students and the university, Teague has been named a University Professor-an honor bestowed selectively on UGA faculty who have had a significant impact on the university in addition to fulfilling their normal academic responsibilities.

Teague came to UGA in 1977 from the University of Texas at Austin where she earned her Ph.D. in English literature and was an instructor. Her bachelor’s degree is from Rice University in Latin and Honors English.

Joining the English department at UGA, she moved up the ranks to professor in 1991 and in 2003 was named a Josiah Meigs Distinguished Teaching Professor, the university’s highest teaching honor.

Teague was nominated for the University Professorship by colleagues in the Franklin College of Arts and Sciences, who noted her deep interest in the quality of undergraduate education and her contributions to institutional efforts to enhance the student learning experience, as well as her service on numerous departmental, college and University Council committees.

“I retain the belief that faculty governance, for all its headaches, really is the best way to manage education,” Teague said. “If faculty want to have their voices heard on matters of educational policy, they must agree to serve. Working on committees and task forces has meant a fair amount of report writing over the years, but I know it has contributed to making the university a stronger institution.”

Teague takes satisfaction in seeing that numerous recommendations from both the Task Force on Undergraduate Education and the Task Force on Writing have been implemented, including the establishment of the Writing Fellows Program to help faculty strategize how to bring more writing to their classrooms and a cross-disciplinary Writing Certificate program for undergraduates.

More recently, she served on the Quality Enhancement Plan team that worked for three years to develop the First-Year Odyssey Seminar Program that will be launched this fall-offering all incoming first-year students the opportunity to participate in small group academic seminars led by tenured and tenure-track faculty. Not surprisingly, she hopes to teach one of the seminars.

A firm believer in crossing academic boundaries, Teague has been involved with UGA’s department of theatre and film and with women’s studies-dovetailing with her research that has largely focused on drama and on early women writers.

Douglas Anderson, Teague’s department head, noted in his nomination how she has managed to interweave teaching and research with her considerable university service. “In the aggregate these efforts amount to just the kind of institutional impact that the University Professorship exists to celebrate and reward,” he wrote. “That she has done all this important work in addition to-not at the expense of-exemplary teaching and scholarship is all the more remarkable.”