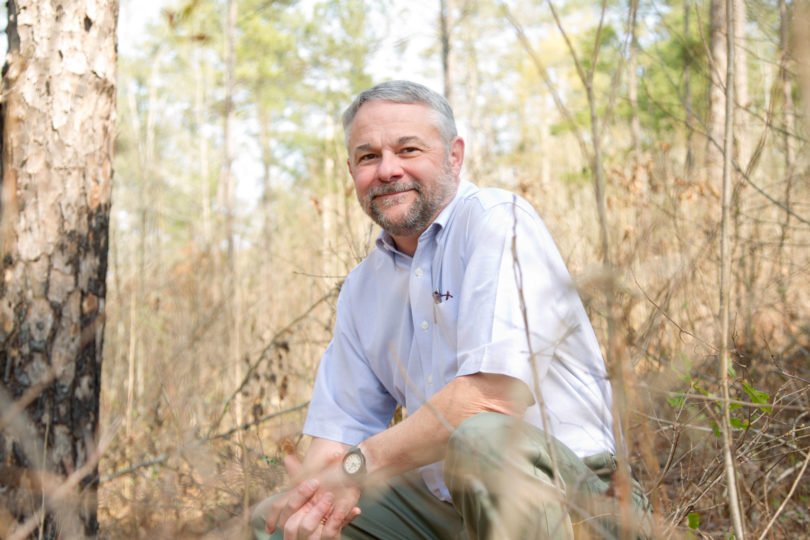 Back in his late 20s, Dale Greene found himself almost done with his Ph.D., recently married and without a job. He’s sometimes asked why he came to UGA, and without hesitation he says, “It was a job.”

But it wasn’t just any job. For a young man who grew up helping tend his grandmother’s small woodland in Arkansas, coming to UGA for a forest operations faculty position was a “great opportunity. It was a dream job to get to start at Georgia.”

Greene is actually on track to likely spend his entire career at UGA’s Warnell School of Forestry and Natural Resources. He and his wife, Jeanna Wilson, a poultry science faculty member in the College of Agricultural and Environmental Sciences, came here nearly 30 years ago and never left. And after leading classes for nearly three decades, Greene now is leading the Warnell School.

After serving as interim dean for five months, Greene took on the job permanently in June after a national search. Stepping out of the classroom and into a full-time administrative role has been a challenge, Greene said, but one he is relishing.

Greene already was serving as Warnell’s interim associate dean of academic affairs when he was named interim dean. And although different from anything he’d done before, overseeing the academic programs was a welcome new adventure.

“I was enjoying it and helping students,” he said. “I really liked the pace. You didn’t just go down your to-do list. You handled things as they came through the door.”

It didn’t take him long as interim dean to realize he enjoyed the top office, so he applied.

He was up against some tough competition, but he had some advantages over the other applicants: three decades of honored teaching at UGA, strong and vocal support from Warnell’s alumni base, numerous awards and accolades for his work with the forest industry and in the classroom and an incalculable number of contacts across the state. Between him and Jeanna, Greene jokes, “we can’t go anywhere in Georgia without bumping into someone we know.”

His background before UGA also made him a strong candidate for the job. He earned his bachelor’s degree from Louisiana State University in 1981, and he followed that up with a master’s degree from Virginia Tech in 1983, which is also where he met Jeanna. When she moved to Auburn University for a doctoral  program, he followed her and earned his doctorate in 1986.

“I never set out to be an academic, but when I realized that I had found the person I wanted to marry, I decided that was the first decision to get right,” Greene said. “Everything else would likely work out if I made the right decision there.”

Now, Greene will focus on some of the short-term and long-term challenges facing the Warnell School. He already is filling vacant faculty positions, leading a strategic plan revision and re-energizing Warnell’s fundraising and development efforts.

So far, he said, “a lot of my job has been getting people in place.”

And as a forester, he’s also working on expanding his contacts to include professionals in the wildlife, natural resources,  recreation and tourism, and water and soils fields.

But his long-term and most important goal, he said, is to make sure that the Warnell School keeps striving to be one of the top natural resource programs in the country.