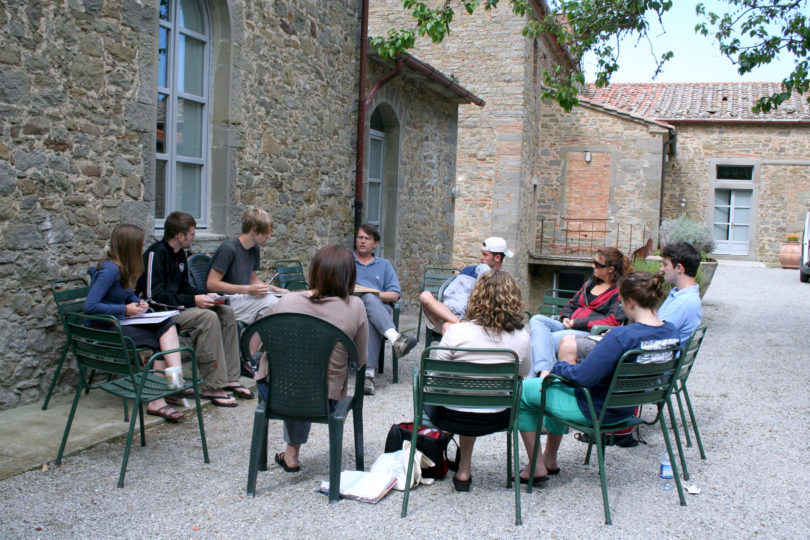 Long the site for UGA's study-abroad program for art

Course in Cortona brings students near birthplace of science and medicine

Since 1970, UGA art students have flourished in a study-abroad program set in the quiet, walled town of Cortona in Italy’s gorgeous Tuscany region. This year however, three of the university’s most honored professors brought a new formula to Cortona: the study of science.

Now, the new Science May term program will become a permanent part of the curriculum in this city begun by the Etruscans. The first class of 30 gave rave reviews for the classes, taught by Wyatt Anderson, Alumni Foundation Distinguished Professor of Genetics; David Puett, Regents Professor of Biochemistry and Molecular Biology; and Pulitzer-Prize-winning historian Edward Larson, who is Richard B. Russell Professor of American History and Talmadge Professor of Law.

At first it may seem incongruous to offer these courses in the remote Tuscan hill town of Cortona.

“The Italian Renaissance artists themselves were aware of the need to understand human anatomy as evidenced by their breathtaking two- and three-dimensional works,” Puett said. “The students responded very positively and enthusiastically to the demands placed by two three-hour courses in a three-week period. Particularly attractive features of the session were the small class size and the small discussion groups, in which students participated actively in the learning process.”

“The program was such a startling success that plans are under way to make it an annual May semester with as many as 40 students,” said Rick Johnson, director of the Cortona program in the Lamar Dodd School of Art.

“It was gratifying to see that a program set up as an art and design center could also work for our sister programs in the sciences.”

Larson taught the history of medicine and many of the students found the small size of the program ideal.

“So many of them said that this was the first time at UGA that they had had this close of a contact with their professors,” he noted.

“There was an intense level of interaction between us, and they responded to that.”

Anderson, Puett and Larson were joined by their wives Margaret, Susan and Lucy respectively, who played important roles in getting this new program off the ground.

“The students were bright and hard-working, and I especially enjoyed an opportunity to spend more time with them in small discussion sections than I am usually able to arrange,” Anderson said.

“The interchange with students in small groups made the teaching experience at Cortona a real pleasure. Margaret and I ate dinner with the students on weekday evenings, and we took several trips with them, so we were able to get to know them personally. I look forward to teaching it again in May 2007.”

Johnson noted that Cortona’s proximity to Florence and Bologna also was seen as a valuable resource because the history and biology of medicine could be explored in special museums and collections in those cities.

“Cortona’s new John D. Kehoe Center was the perfect place to house this type of seminar class as there was a 100-seat auditorium where the entire group could meet for the two daily general lectures,” said Johnson.

“Technology was up to date, and thus PowerPoint could be used to organize the lectures. The groups also scattered along the 4.5 acre campus for breakout sessions.”

Puett noted that the course was perfect for science majors.

“With the University of Georgia rightly stressing international experiences as a vital part of its educational mission, the Cortona Science Maymester program fills a need, particularly for those interested in a career in the health professions,” he said.

“Teaching a group of bright and motivated students with Professors Wyatt Anderson and Edward Larson in this unique setting was both enjoyable and memorable.”