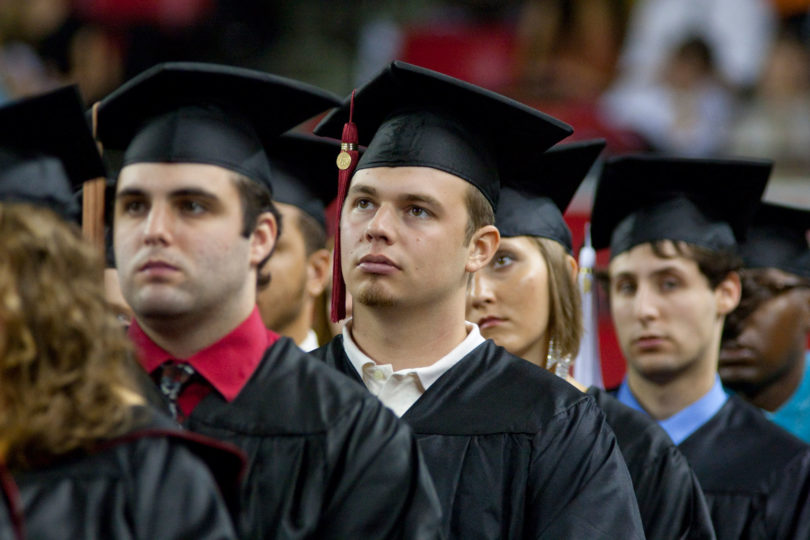 At the combined graduate and undergraduate ceremony

Commencement speaker tells summer graduates to go forth with purpose

In a parade-themed speech, Commencement speaker Pat Mitchell, president and chief executive officer of the Paley Center for Media, told summer 2012 graduates not to be afraid of falls and failure.

“Falling on your face is at least a forward movement,” she said at the ceremony held Aug. 4 in Stegeman Coliseum.

It was a lesson Mitchell learned as a teen riding on a float pulled by a malfunctioning tractor in Swainsboro’s annual Pine Tree Festival parade.

“That new perspective on parades, which always move forward, has had great meaning in my life in my journey from my small town to now, “ Mitchell said. “When I stumbled or lost my balance, when I competed and didn’t win, when an idea of mine was rejected and when I was unemployed and broke, every time the fall, the disappointment, the failure moved me forward in my life’s journey.”

Her speech focused on parades—from town parades with floats, to the graduation processional to smaller, more personal parades she called parades with purpose.

Mitchell, who received both her bachelor’s (1965) and master’s (1967) degrees in English from the Franklin College of Arts and Sciences, spoke of meeting Charlayne Hunter-Gault, one of the first African-American students to enroll at UGA, while both women attended the university. Mitchell participated in her first “parade with purpose” in joining a group of supporters to walk Hunter-Gault to class and keep her safe from protestors.

Mitchell, the first female president of the Public Broadcast Service, encouraged graduates to lead their own parades with purpose.

“Maybe your purpose will be to challenge a company’s hiring or promotion policy,” she said. “Or advocate for more diversity in top management or the corporate board room, or maybe your purpose will be to shape new family policies so that mothers and fathers can pursue the work they love and still be the parents they want to be. It’s harder when you’re the first, the only, or still one of the few.”

In closing, she told the graduates, “Your parade begins here and now. Don’t miss it.”