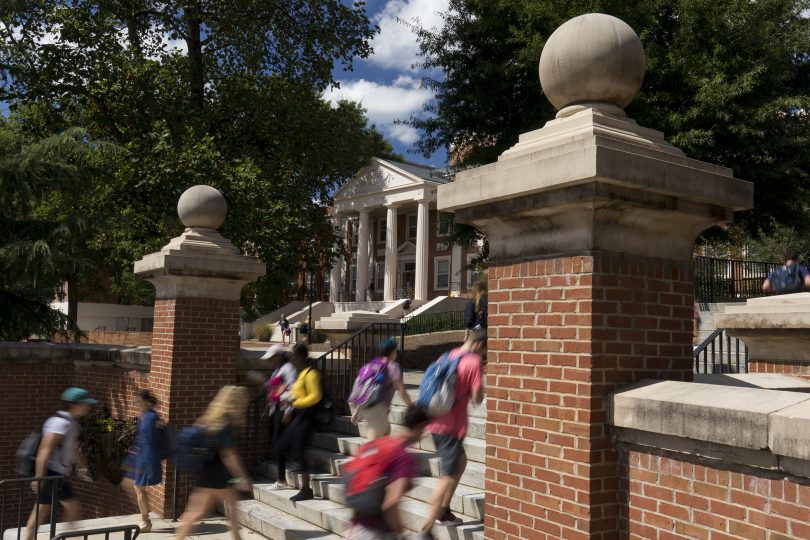 Students on the Baldwin Street steps during a class change. (Photo by Andrew Davis Tucker/UGA)

A college education is estimated to add $1 million to a person’s lifetime earning potential, but for some students the path to earning one is riddled with obstacles. That journey is even more difficult for students who have been in the foster care system or experienced homelessness, according to a new study from the University of Georgia.

But the more college administrators and faculty know about these students’ problems, the more they can do to ease the burden.

Getting into universities in the first place can frequently be a challenge for students who’ve had unstable home lives, said David Meyers, co-author of the study.

“Research tells us that every time a student moves from one foster care placement to another, they lose six months of educational progress,” said Meyers, a public service associate in the J.W. Fanning Institute for Leadership Development. “That’s a pretty serious setback. It’s a challenge for them to participate in after-school activities or athletics. Their college resume is not going to be as strong as those students who don’t face those same challenges.”

It’s a similar struggle for students who’ve experienced homelessness. For those who beat the odds, getting into college is just the start of a whole new set of hurdles. The added stressors of having to figure out how to pay for courses, books and housing once they get there—something many of their classmates don’t have to think about—take a tremendous toll.

“Having to act like an adult when you’re still a kid presents huge challenges for students trying to get into college,” said Kim Skobba, co-author of the paper and an associate professor in the College of Family and Consumer Sciences. “But then when you get to college, you’re still on your own.”

Entirely on their own

The study, published in the Journal of Adolescent Research, focuses on the experiences of 27 college students, all attending four-year institutions, who had been in foster care, experienced homelessness or both. The researchers conducted a series of three in-depth interviews with each participant over the course of one academic year, and several clear themes emerged.

These students all had to “get by” largely on their own. They often were without parental guidance or support during high school, and in college they were entirely on their own. Many took jobs, sometimes going to school full time while also working full or nearly full-time hours.

One student described having six classes while also working 40 hours a week, saying, “I kept breaking down. … I was staying up to about 2 or 4 in the morning doing homework and waking up at 7.” (This type of experience was more common among students who had been homeless than those who were in foster care at the time of their high school graduation.)

It takes a mental and emotional toll on these students. … It really, I think, also shows up in sort of this constant emotional challenge.” —David Meyers, public service associate

One of the biggest expenses for all the students in the study was paying for and maintaining stable housing. Eleven of them experienced at least one period of homelessness since beginning college, living in their cars or couch surfing.

Another constant issue was finding money for books and food. Even with scholarship support, many of the students would ask professors whether the book was essential for success in their course and if so would borrow a friend’s book or even one of the professor’s copies, if possible.

Perhaps not surprisingly, these stressors made it difficult for students to focus on their academics.

“It takes a mental and emotional toll on these students,” Meyers said. “We think about it in financial terms, but it really, I think, also shows up in sort of this constant emotional challenge. Being thoughtful, being vigilant, never really having the luxury of being able to set it aside.”

Institutions like UGA are taking steps to address this issue, with programs that provide emotional support while connecting students to resources they might otherwise not know exist.

Embark@UGA, for example, is the campus-based component of Embark Georgia, an effort led by Meyers and Lori Tiller, a colleague at the Fanning Institute. The program is a statewide network that connects the University System of Georgia and Technical College System of Georgia to the Division of Family and Children Services, the Georgia Department of Education, and numerous nonprofit and community organizations seeking to increase college access and retention for students who have experienced foster care or homelessness.

Through Embark, each USG university and technical college campus and every high school in Georgia has a point of contact to help identify and provide resources to homeless and former foster students who need help.

Additionally, scholarships like Let All the Big Dawgs Eat, which provides a food stipend for students, have also helped narrow the gap. UGA also has made a point to start using free online textbooks in many courses.

But not all schools have the same resources.

“Expanding programs at the federal level that would serve students who’ve been in foster care or homeless would really help close that gap,” Skobba said. “We also don’t want them taking out huge loans because that’s not a good financial situation long term. And some kind of financial aid grant program serving this group would make a huge difference.”

Another big help? Understanding and awareness from professors that not all students are able to spend hundreds of dollars on textbooks or don’t have a personal laptop to use for class assignments.

“I think I was already a pretty flexible understanding professor, but just realizing that if you’re working 40 hours because that’s what it takes to stay in school, some things are going to drop from time to time,” Skobba said. “Having a little bit of breathing room in your syllabus and assignments is probably beneficial to all students, but it’s going to be especially helpful for this group of students.”

Diann Moorman, associate professor in the College of Family and Consumer Sciences, is also a co-author on the study.