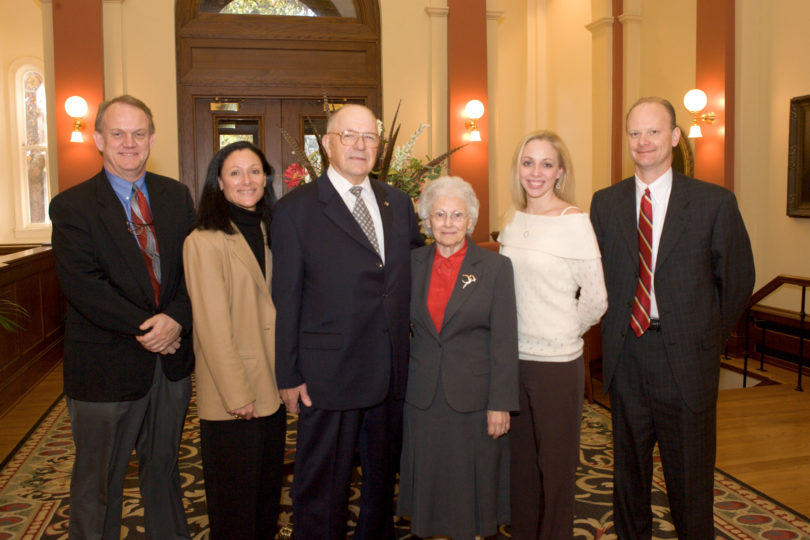 Present for the presentation of the gift were (from left): Rusty Brooks

A letter written some 100 years ago by a woman living in what is now the nation of Croatia was the unexpected key that led to the University of Georgia receiving a $500,000 gift to extend the university’s outreach work in Croatia.

Lawrence V. Phillips, a retired physician, and his wife, Sarah Mae, of Round Hill, Va., hope their gift will help improve public health and economic development in rural Croatia, the southeastern European country that is Lawrence Phillips’s ancestral home.

The couple decided to make the gift after learning that UGA has been providing training and assistance to Croatia for several years through its International Center for Democratic Governance, a unit of the Carl Vinson Institute of Government. UGA’s programs include economic development work with governments in rural Croatian communities and an exchange program with the University of Zagreb.

“This gift rewards more than eight years of hard work helping the University of Zagreb develop an outreach program,” says Art Dunning, UGA’s vice president for public service and outreach. “Outreach is an important role for universities in countries like Croatia that aspire to be part of the European Union.”

Lawrence Phillips was in the private practice of medicine for 50 years in Temple Hill, Md., before retiring in 2004. Trained as a fighter pilot during WWII, Phillips remained a reservist while earning his medical degree under the GI Bill. He continued in the Air Force Reserves as a medical officer, flight surgeon and command surgeon, completing 40 years and nine months of military service and retiring in 1983 with the rank of colonel.

But he knew little about UGA’s work in Croatia until this past summer, when he needed to have an old letter translated.

The letter was written in the early 1900s by a woman from the village of Zaloka where  Phillips’s mother, Dora Suljada, was born. Phillips, who is writing a memoir about his life and family, obtained the letter from relatives in Croatia who told him it contained information about his mother.

But the letter was written in Croatian and Phillips couldn’t find a readily available translator. So he asked his daughter, Carol Cotton, a professor of health promotion at UGA, if someone at the university might help.

Using the Internet, Cotton found Rusty Brooks, who coordinates UGA’s Croatian programs. Brooks referred her to Keith Langston, head of the department of Germanic and Slavic languages. Within an hour of receiving the letter from Cotton, Langston faxed her back a translation.

That got her father’s attention, according to Cotton.

“My father is a no-nonsense kind of person,” she says. “He worked many years around Washington, D.C., where there are embassies and all kinds of experts, but he couldn’t find anyone who could do this translation quickly and informally. When Keith did it at no charge, on his own time, it made an impression.”

It also prompted Phillips to take a closer look at UGA’s work in Croatia.

“That may be the most expensive Croatian translation in history,” Phillips jokes about the letter. “I looked at the connections between the Vinson Institute and Croatia, and it’s obvious the university has a tremendous interest and emotional involvement in Croatia. Since I’m an MD, and Carol is in health promotion, I thought it would be good to combine public health and rural development work in Croatia, and that’s how this gift will be used.”