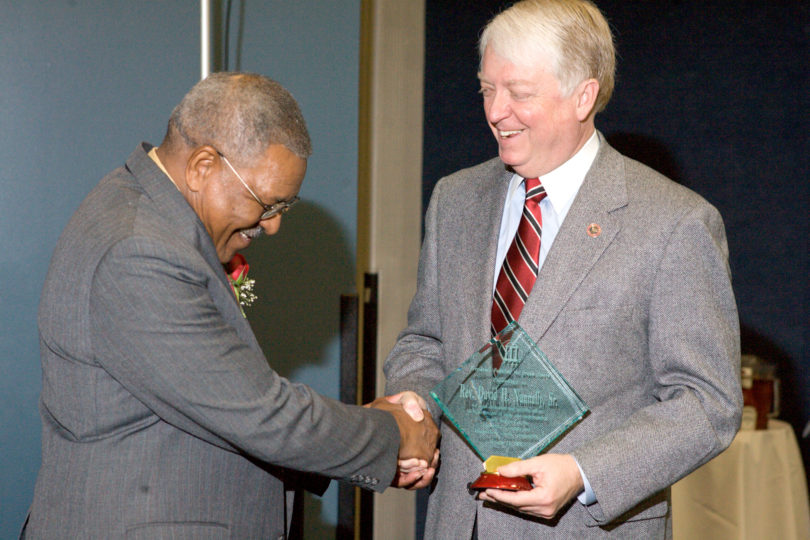 A packed audience attended this year’s Freedom Breakfast, which jump-started a week of activities honoring Martin Luther King Jr.,  and awarded four community leaders the Fulfilling the Dream Award from the Office of the President.

Sponsored by UGA, the Athens-Clarke County government and the Clarke County School District, the Freedom Breakfast was held in the Tate Student Center’s Georgia Hall. Award winners were UGA employee Christine Harris, a volunteer with the Clarke Youth Association and treasurer of the Athens-Clarke County NAACP; the Rev. Archibald Killian, pastor of the New St. Mark AME Church and host of the radio show Cross Roads; Esperanza Mejia, a doctoral student in UGA’s Department of Language and Literacy Education; and the Rev. David Nunnally Sr., founder of the Athens Area Human Relations Council and the Reach Out and Touch Club for high school students.

Matthew Winston Jr., acting director for the Office of Institutional Diversity, welcomed  the crowd with levity.

“Although freedom is a concept and virtue we honor in society,” he said, “the operative word is breakfast.” The crowd laughed and enjoyed the spread of pancakes, fruit, eggs and bacon before joining in on a group singing of “Lift Ev’ry Voice and Sing” and listening to the invocation by campus minister Robert L. Harris.

“My passion for Dr. King runs deep,” said keynote speaker Damon Evans, UGA’s director of athletics, who focused his speech  on King’s leadership skills. Without his work, Evans questioned, “would we still have separate lunch counters?…Would we all be sitting here together today? Dr. King showed us the way to mend broken fences and move on to building this great land.”

After quoting a portion of King’s “I Have a Dream” speech, he added: “Let us continue the legacy of a man who stood, steadfast, in the face of diversity. Let us have a dream.”

King’s famous speech was recited in full by UGA alumnus Anthony Hyatt, who noted that, “If it weren’t for Dr. King, I might never have left southern Alabama…This is probably the greatest speech in American history.”

Art Dunning, vice president for the office of public service and outreach, urged the audience, particularly UGA students, to study the context in which that speech was made, and the place of today’s remarks in history.

“I’m going to give you a few reading assignments,” he announced to laughter. He listed Lincoln’s Emancipation Proclamation and Gettysburg Address, King’s “How Long, Not Long” speech given at the Alabama capital (which Dunning witnessed), and the summaries of the 1964 Civil Rights Act and 1965 Voting Rights Act.

Under the guidance of chorus director Alicia Jones, the Hilsman Middle School Chorus ended the breakfast with three songs, the last of which inspired the audience to clap and sway along.

“I feel so honored,” award-winner Mejia said afterward.  “This is reaffirming, that my values and culture are universal for any culture, any race. It’s really beautiful.”