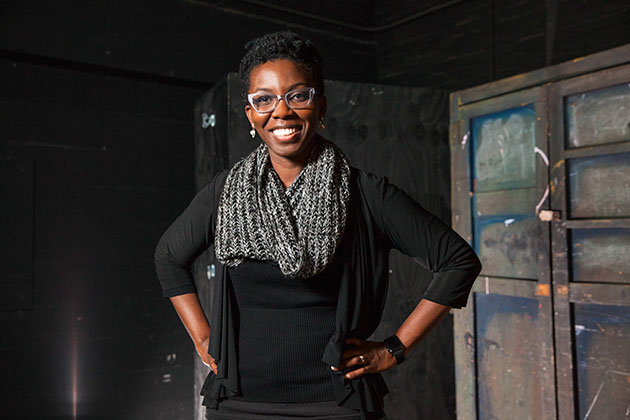 An assistant professor in the theatre and film studies department of the Franklin College of Arts and Sciences, Amma Y. Ghartey-Tagoe Kootin conducts research that focuses on two main questions: How can one use theater, film and television to tell history? And how does performance affect the ways in which members of the African diaspora see and understand each other?

Through archival-based performance pieces, books and articles, Ghartey-Tagoe Kootin, who also has a joint appointment in the Institute for African American Studies, develops innovative responses to these questions. Her latest endeavor began in a graduate school class at New York University’s Tisch School of the Arts when she took a class on the history of the world’s fairs.

“That very class with professor Barbara Kirshenblatt-Gimblett is the reason why I’m currently working on what we hope to be a Broadway-bound musical called AT BUFFALO. It gave me the opportunity to learn about the crazy, fantastical world of world’s fairs,” she said. “Think Disney World meets the Olympics meets carnivals, all the size of a miniature city. The Eiffel Tower, the Seattle Space Needle, the Pledge of Allegiance, the microwave—all of those things come from world’s fairs.”

Ghartey-Tagoe Kootin helms a team of theater professionals to develop the musical, which explores three exhibits about black culture on display at the 1901 Pan-American Exposition in Buffalo, New York. The first exhibit, known as Darkest Africa, featured 98 west and central Africans brought to the U.S. to live in a re-created Disney World kind of attraction that simulated an African village.

Across the street was the Old Plantation, which re-created a “happy” slave life scene in an Antebellum cotton field. The third display called the American Negro Exhibit, however, chronicled the progress and history of African-Americans, as told by a group of African-American intellectuals including W.E.B. Du Bois.

Ghartey-Tagoe Kootin received national recognition early on in the development process of the musical through grants, a festival selection and residencies. This fall, she and her team will be in Buffalo to finish the musical’s script and score. The work, she said, illustrates her methodology of “performing the archive.”

“I am arguing and showing that one must embody archival material to understand it, not just read it,” she said. “We must perform the archive—that means taking our present-day creative arts practices and combining them with the historical analysis of archival material. When we do that, we actually are creating research sites, because now bodies, especially on stage, are proxies for the archive.”

She also is working on a book called Laughing after Slavery thanks in part to a fellowship from the Willson Center. The book centers on a character known as Laughing Ben who was depicted at the same 1901 fair.

“Anyone who does work on black stereotypes in the U.S. knows the image of this figure,” she said. “He’s been used as the epitome of almost everything that’s wrong with how society views African-Americans.”

What’s often left out about this figure, she said, is the story behind his laugh.

“Laughing Ben was a former slave who literally made slavery a laughing matter,” she said, “but he was not a stereotype. Performing his archive helps me to make this argument in the book.”

Beyond research, her love of teaching comes from growing up on two university campuses—Tuskegee University and Kansas State University. Academic parents instilled in her a clear love of education and learning, lasting impressions that still bring light to her face and informs her teaching. In courses on performance studies, as well as African-American studies, her overall teaching philosophy is the pursuit of an even broader relevance.

“It has become clear to me that what I’m actually teaching, regardless of the topic or subject matter, is life,” she said. “I’m teaching human beings how to fearlessly identify, use and serve the world with their gifts and talents. I am teaching them the very skills that we know will be demanded of humanity in the 21st century.”