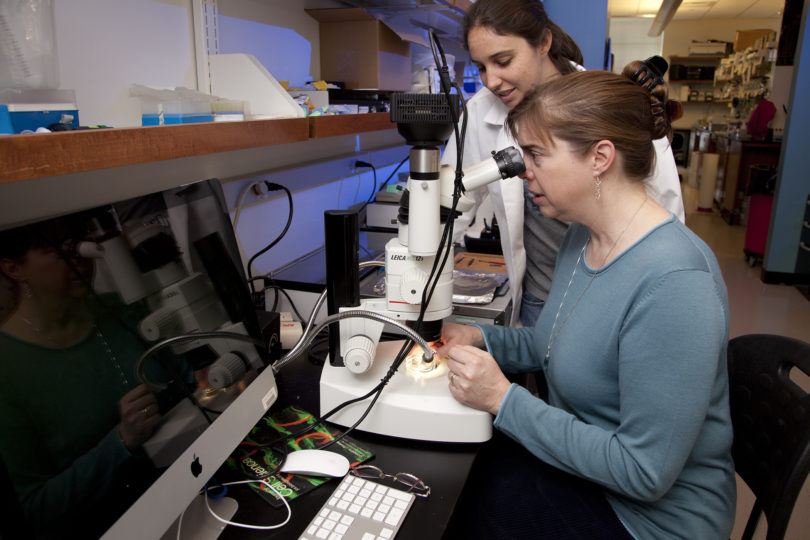 The thymus gland is a critical component of the human immune system. It is responsible for the development of T-lymphocytes, or T-cells, which help organize and lead the body’s fighting forces against harmful organisms like bacteria and viruses.

The main body of the thymus lies beneath the breastbone in the upper chest. But scientists were surprised several years ago when two teams of researchers discovered that both mice and humans have extra thymus-like glands throughout their necks.

Now, researchers at UGA have published findings in Nature Communications that reveal where these extra glands come from and help explain what roles the extra thymuses may play in the complex network of the body’s natural defense systems.

“This was a really important question for me as a developmental biologist studying the thymus,” said Nancy Manley, a professor of genetics in UGA’s Franklin College of Arts and Sciences and principal investigator for the project. “It would almost be akin to someone discovering that humans have extra heart tissue somewhere else in the body.”

Manley and her team of researchers discovered that the small satellite thymuses, known as cervical thymi, have two distinct origins, and while it’s not entirely clear if they play a major role in human health, the T-cells these thymi produce could be either helpful or harmful.

During this dividing process, there always are a few cells that don’t follow the normal path, sticking neither to the thymus nor the thyroid. These castaway cells are scattered and marooned throughout the developing neck.

“It’s too late for these cells to join the major glands; eventually some decide to become thymus cells, and this is where cervical thymi come from,” Manley said.

Some of these cells turn directly into thymus cells. Others, for reasons not yet fully understood, appear to start out as parathyroid cells, but unexpectedly switch and turn into thymus cells instead.

The ultimate question facing researchers now is whether these satellite thymus glands matter. Are they merely an inconsequential relic of an untidy developmental process? If not, do they help or harm the body?

Manley cautions that it is too early to answer these questions definitively, but the group examined T-cells created by both the direct developing thymi and those derived from parathyroid cells. They discovered that they have very different functions from those found in the main thymus gland.

The thymus cells that began life as parathyroid primarily make a kind of T-cell that is thought to act as an early responder to pathogens in the body.

“They’re kind of like the canary in a coal mine,” Manley said. “They see something harmful and alert other cells to the problem so they can come and fight the infection.”

Cells of this type are relatively rare in the body, but some research suggests that more of them could help the body fight infections more rapidly and completely.

Nobody can say with certainty whether having cervical thymi is good or bad for you, Manley said. But answering that question will be a central focus of the team’s future research.