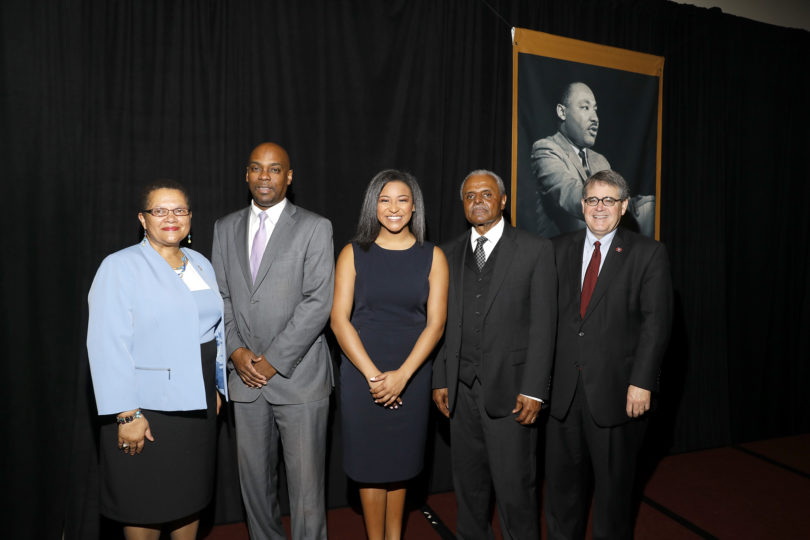 It’s been more than 50 years since Dr. Martin Luther King Jr. gave his famous speech “I Have a Dream,” in which he foretold a nation united in the belief that all are created equal.

But his is a dream that has not yet been achieved, said Cheryl Davenport Dozier, president of Savannah State University and the keynote speaker of the University of Georgia’s 15th annual Martin Luther King Jr. Freedom Breakfast Jan. 12.

“On April 3 (1968), he gave that other speech, that prophetic dream he had, that dream that he had been to the mountaintop. … He said something on that day that I think permeates where we are today,” Dozier said. “He said, ‘There are difficult days ahead, but as a people we will get to the promised land.’

“Now, I have to say something this morning, there are difficult days ahead,” she continued. “But together, collectively, we can get to the promised land, but it does take some work to get there.”

Dozier challenged those attending the breakfast that commemorates King’s life and legacy to determine what role they wish to play in getting the nation to that mountaintop, saying that “liberty and justice for all” cannot simply be something that is said but rather something for which everyone must fight.

“The greatest injustice is that every young person in this world does not receive a quality education,” she said. “Because, you see, I believe that education is the great equalizer. I believe that it is what makes a difference.”

As the 13th president of Savannah State, Dozier’s mission has been to see her students from “matriculation to graduation,” establishing a program that provides financial support to students to ensure they successfully graduate and performing research that helps find ways to promote health in underserved communities.

Prior to her tenure as president, Dozier spent 17 years at UGA, beginning as a professor in the School of Social Work and ultimately becoming chief diversity officer at the university and a member of the President’s Cabinet.

At the breakfast, the university also recognized three individuals for their dedication to making King’s dream of equality and justice a reality.

Natalie Morean, a third-year student in human development and family sciences; Gregory Roseboro, executive director of admissions and diversity programs for UGA’s School of Law; and the Rev. Winfred Martin Hope, who has pastor at Ebenezer Baptist Church West in Athens for more than 37 years, were awarded the President’s Fulfilling the Dream Award for their work in advancing issues of human rights and race relations.

Morean is the president of the National Council of Negro Women, a member of the Black Affairs Council and a fellow in the Leaders Engaged in Affirming Diversity program at UGA. She is passionate about serving the less fortunate and actively involved in organizing efforts to provide food and blankets to the homeless population in Athens-Clarke County. Morean plans to pursue an advanced degree in public health after she graduates in May 2019 and to found a nonprofit to combat hunger and malnutrition in low-income communities.

A native of Alabama, Hope has implemented new ministries for children, youth and adults during his tenure at Ebenezer Baptist Church West, including a Community Ministry Center that assists those in need and the Foster Student/Parent program that provides a home away from home for students attending UGA. He also partnered with First Presbyterian Church in Athens to build three Habitat for Humanity homes for local families. Hope also led a group of 16 Ebenezer Baptist West church members on a mission trip to Kenya, where the church now maintains a partnership with the St. Carl Home of the Champions School in Kisii.

Jointly sponsored by UGA, the Athens-Clarke Country Unified Government and the Clarke County School District, the Freedom Breakfast and the President’s Fulfilling the Dream Awards are coordinated by the UGA Office of Institutional Diversity.