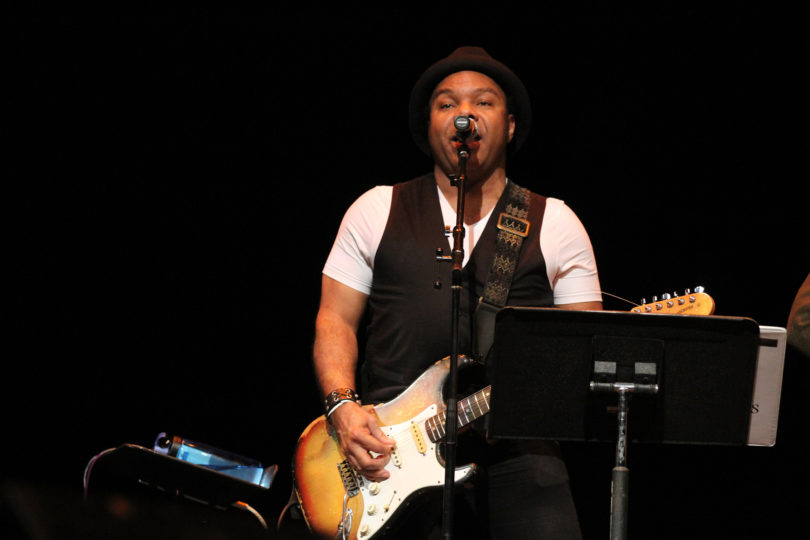 Dez Dickerson will perform as part of the Freedom Sings concert.

Athens, Ga. – The University of Georgia Grady College of Journalism and Mass Communication will host a concert by the group Freedom Sings Oct. 2 at 7 p.m. at the Athena Ballroom in the Classic Center.

The concert, which precedes Homecoming Weekend, is launching Grady’s Centennial celebration, a series of events that will go through 2015.

“Homecoming always is a stellar event at Grady, but this year we will reach new heights,” said Charles Davis, dean of the Grady College. “From the concert by the award-winning Freedom Sings to our legendary tailgate, we will launch our centennial year with the appropriate level of fanfare. This will be a weekend to remember!”

There is no charge for the Freedom Sings concert, but tickets are required and can be picked up at the Classic Center box office.

Founded by the First Amendment Center in Nashville, Freedom Sings comprises several award-winning recording artists performing songs that have at one time been censored or banned. Between songs, Ken Paulson, founder of Freedom Sings and former editor of USA Today, will tell the story of the censored tune.

“Freedom Sings is a unique concert experience, bringing together award-winning recording artists, energetic rock, pop and soul music and a celebration of free speech in a fast-paced and interactive show,” Paulson said. “Educators applaud its innovative and inspiring approach; young audiences are entertained and engaged throughout.”

• “This Land is Your Land” by Woody Guthrie (1940), in which more popular versions of the song scrapped two verses about private property and poverty;
• “Louie, Louie” by The Kingsmen (1955), which was the subject of an 18-month FBI investigation because of its unintelligible lyrics that were allegedly profane;
• “Short People” by Randy Newman (1978), which the Maryland Legislature held a vote to ban the song on radio stations;
• “It’s the End of the World As We Know It” by R.E.M. (1987), which was one of multiple songs Clear Channel ordered its radio stations to stop playing after the Sept. 11, 2001 terrorist attacks; and
• “Pumped Up Kicks” by Foster the People (2011), which was banned on several radio stations due to its addressing the topic of school violence.

Musicians scheduled to perform include:
• Dez Dickerson, former member of Prince and the Revolution, now a solo artist and entrepreneur
• Joseph Wooten, keyboard player for the Steve Miller band as well as a solo musician
• Bill Lloyd, former member of the hit-making country duo Foster and Lloyd, now an artist, producer and songwriter who has played with Cheap Trick and written for Trisha Yearwood, Martina McBride and Hootie and the Blowfish
• Jonell Mosser, a singer whose performances can be found in such movies as “Boys of the Side” and “Hope Floats,” and on her own soulful solo recordings.

The Grady Centennial celebration will feature events now through its anniversary year, 2015, including the 100th Birthday Field Party and Centennial Gala April 16-19, and a series of receptions in cities around the country.