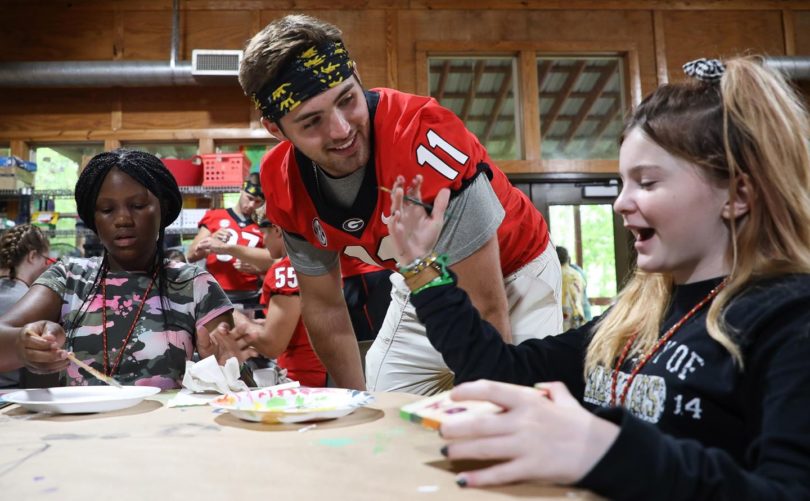 Georgia junior quarterback Jake Fromm was named to the 2019 Allstate AFCA Good Works Team on Thursday. Fromm is one of 11 players from the NCAA Football Bowl Subdivision (FBS) selected based on their commitment to community service.

For 28 years, the American Football Coaches Association (AFCA) has recognized a select group of college football players committed to making a difference in their communities. There were also 11 combined players chosen from the NCAA Football Championship Subdivision (FCS), Divisions II, III and the NAIA.

Fromm, a native of Warner Robins, is one of three players from the Southeastern Conference on the FBS 2019 Allstate AFCA Good Works Team.

Georgia leads the nation in Allstate AFCA Good Works Team honorees with 20 since the award’s inception in 1992, including eight in the last nine years and for the last six consecutive years.

Fromm was the emcee for this year’s Big Hearts Pageant, which is an event that benefits Extra Special People (ESP). He has also participated in ESP’s “Bulldogs and Buddies,” which welcomed individuals with developmental disabilities and their families to Georgia football practices. Fromm has been a repeat visitor to Camp Sunshine, a facility which provides recreational, educational and support programs for children with cancer and their families.

In addition to also reaching out to a young Bulldog fan in South Carolina who was terminally ill, Fromm has made numerous hospital visits in the Athens and Atlanta areas and spoken and read to children in Athens area schools since his UGA career started in 2017, among other volunteer activities in the community.

On the field, Fromm has completed 412 of 631 pass attempts for 5,686 yards and 56 touchdowns en route to leading the Bulldogs to a 25-5 record as a starter over the last three seasons. Guiding Georgia to the last two SEC Championship Games, Fromm directed the 2017 Bulldogs to a double-overtime victory over No. 2 Oklahoma in the Rose Bowl Game and a spot in the College Football Playoff National Championship Game.

In the classroom, Fromm has posted a 3.38 GPA in finance.

The 2019 Allstate AFCA Good Works Team will be invited to New Orleans to participate in a special community service project ahead of the 2020 Allstate Sugar Bowl, where the entire squad will also be recognized on the field during a halftime presentation.

Fans are encouraged to visit ESPN.com/Allstate to vote for the 2019 Allstate AFCA Good Works Team Captain now through Nov. 22. The Team Captain will be honored at this season’s The Home Depot College Football Awards on ESPN.