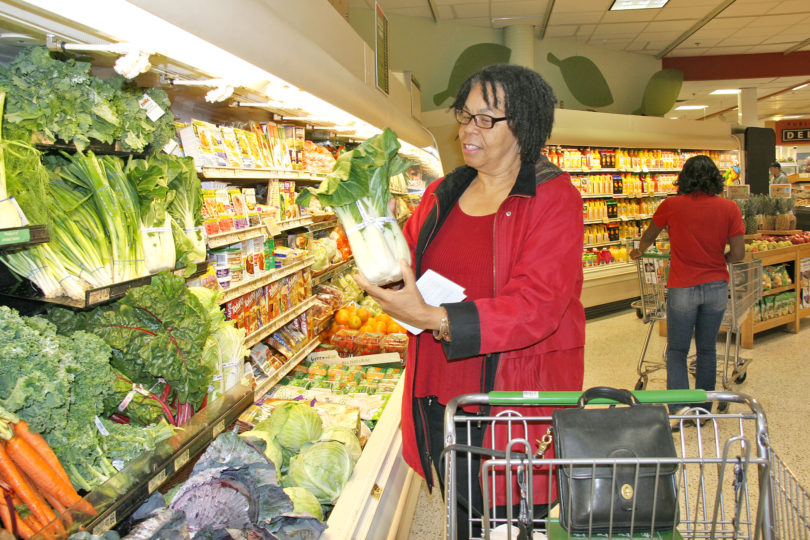 Atlanta, Ga. – As UGA Extension Fulton Fresh Mobile Farmers Market program moves into a new year, coordinators are working to educate an army of informed food consumers to advocate for better food for their neighborhoods.

The Fulton Fresh Mobile Farmers Market, which launched in 2011, has made a name for itself in Atlanta by providing nutrition classes for the real world and weekly deliveries of fresh vegetables to food insecure neighborhoods across the city.

The program started with one farmer’s market truck but has expanded to use two trucks serving 16 neighborhoods during the summer. In 2013 alone, more than 5,000 residents took part in Fulton Fresh’s nutrition programs and received fresh vegetables.

“With Fulton Fresh we are introducing people to new foods and letting them sample things they’ve never had before-like quinoa and eggplant,” said Menia Chester, UGA’s Futon County Extension Coordinator. “This next step is helping to maintain that level of healthy eating when we are not around.”

In October and November, Chester worked with managers at grocery stores including the DeKalb Farmers Market, Trader Joe’s, Kroger and Publix to set up store tours for a group of her Fulton Fresh regulars. The group met with managers of each store, learned about their produce selections, sale policies and each store’s added amenities-like site-made bread or healthy choice programs.

The groups also discuss budget-shopping strategies, like shopping with a list and with a weekly meal plan.

Maybe most importantly, Chester said, the tour groups get to meet and talk to the managers and department managers inside the store. They also get a good feeling for the wide variety of food that’s out there. She said it’s empowering to know that you can ask for better quality food.

“One of the goals here is get people comfortable to ask their local shop owners for better food and to feel confident when they go into a grocery store outside their neighborhood,” Chester said.

Most of the participants in the Fulton Fresh super market tour group have been shopping for their families for decades, but they feel like they are learning a lot from the program.

“You can never have to much information-especially when you’re learning about better nutrition and healthier lifestyles,” said Sabrina Beasley, who attended Chester’s Fulton Fresh programs and is part of the grocery store tour group. “When you have more information, you can be confident in going back to your community and teaching someone else.”

Chester’s hope is that Beasley and other will take what they learn back to their neighborhoods, churches and community centers and encourage their friends, neighbors, children, nieces and nephews to hit the aisles of their local grocery stores with confidence.

Fulton Fresh will reboot its supermarket shopping workshops in January, and Chester is organizing more nutrition, cooking and shopping classes for 2014.

The entire program is poised to grow in 2014 with the help of a $50,000 grant from the Arthur Blank Foundation and a new partnership with the Atlanta Community Food Bank and other food security and food quality groups. The partnership is working together to help create food oases across the city of Atlanta and eliminate food deserts.

For more information about Fulton Fresh call 404-332-2400 or see http://www.fultoncountyga.gov/fcced-home.